by Kristopher B. Kastens and Timothy Layden
Kramer Levin Naftalis & Frankel LLP
Your LinkedIn Connections
with the authors

Blockchain has the potential to be the new frontier of innovation and a disruptor of existing technologies, and with this, has the potential for significant patent litigation. The technology now commonly known as "blockchain" was described by Stuart Haber and W. Scott Stornetta, and then used to describe the framework for bitcoin by a writer using the pen name Satoshi Nakamoto. The most talked-about use for blockchain has been for financial instruments, such as the aforementioned bitcoin as well as Ethereum and scores of non-fungible tokens, or NFTs. However, blockchain is being considered for numerous other areas, including energy trading, supply chain management, health care, e-commerce and life sciences.

Blockchain has been the subject of numerous patent applications over the past decade. As of the time of this writing, at least 6,0621 issued patents specifically address blockchain. The number of patents published and issued on the technology has been increasing: https://www.lens.org/

Blockchain has not been a significant source of patent litigation. However, one case currently in the courts is Rady v. Boston Consulting Group, LLC. 2 There, Rady developed a method for identifying physical items, particularly gemstones, by their unique properties using 3D spatial mapping and spectral analysis and recording the result on a blockchain that acts to 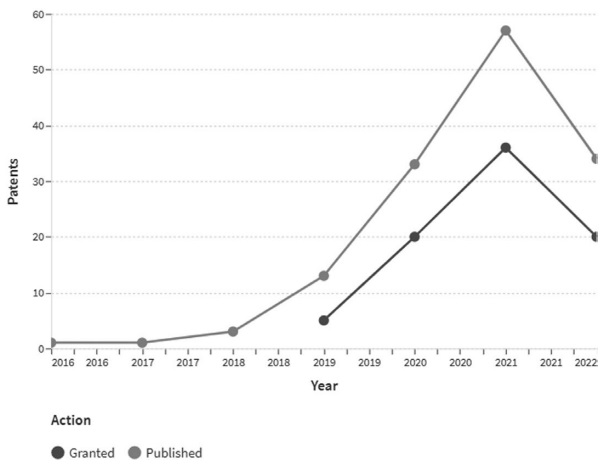 guarantee the authenticity of the physical item. A defendant moved to dismiss by asserting the patent are not patentable subject matter because it covers an abstract concept without any inventiveness. In a short opinion, the Court determined that the claims were abstract because "Plaintiff's claims are directed at the abstract idea of collecting, analyzing, and storing data." Id. at 5. The Court also found that recording and logging unique gemstone data in a "peerto-peer" network did not improve computer functionality, and the Plaintiff did not describe how the claims improved blockchain technology.3 Id. at 5-6. As this decision shows, the current state of patentability law is a potential hurdle for blockchain litigation, and should the case proceed, it may provide an early indication of how claim construction and any validity challenges could play out for blockchain patents.

Despite this, there is reason to believe more patent litigation related to blockchain is coming, but only time will tell how many more cases are filed. As more patents are issued, the chances that they will come into the hands of a party willing to assert them increase as well. Additionally, as companies dealing with this technology mature, they are making more revenue. This revenue will attract those wanting to extract value from their patents. This is certainly an area to keep an eye on for all those interested in patent litigation.

3. In light of the District Court dismissing Rady's claim of patent infringement, Rady is currently seeking certification of the ruling to initiate its appeal to the Federal Circuit. Briefing of the matter is complete, however, the District Court has yet to issue its ruling. If Rady's motion is granted, then it may be only a matter of time before the Federal Circuit's weighs in on blockchain technology patents.