The Situation: The definition of "waters of the United States" in the Clean Water Act ("CWA") circumscribes the jurisdictional authority of the federal government under the Act. This impacts not just wetland permitting but also oil spill regulation and hazardous substance release reporting.

The Result: If finalized as proposed, CWA's jurisdiction would be limited, and areas currently subject to federal regulation would only be covered by state and local laws.

Looking Ahead: Comments on the proposed rule are due on April 15, 2019. Litigation challenging any final rule can be expected.

The Department of the Army and the United States Environmental Protection Agency ("EPA") published a proposed rule revising the definition of "waters of the United States" that, if finalized, would have broad ranging impacts on the scope of jurisdiction under the Act, including projects requiring a permit to fill wetlands. Comments on the proposed rule are due on April 15, 2019.

In 1972, Congress amended the Federal Water Pollution Control Act, commonly called the Clean Water Act, in an effort to address concerns about the nation's water quality and the federal government's legal authority to remedy those concerns. One regulatory program developed under this authority was to require a permit from the U.S. Army Corps of Engineers for the discharge of fill into any "water of the United States." Defining a "water of the United States" has proven to be a complex and contentious task. Although jurisdiction over traditional navigable waters (such as rivers used in commerce) is clear, jurisdiction over bodies of water that are hydrologically connected with or adjacent to navigable water has been less clear and resulted in extensive litigation and repeated attempts to clarify the meaning of "waters of the United States."

Most recently, the Supreme Court interpreted "waters of the United States" in Rapanos v. United States, 547 U.S. 716 (2006). Written by former Justice Scalia, the four-Justice plurality found that "waters of the United States" "included only those relatively permanent, standing or continuously flowing bodies of water 'forming geographic features' that are described in ordinary parlance as 'streams[,] ... oceans, rivers, [and] lakes'" and "wetlands with a continuous surface connection" to relatively permanent water. In his concurring opinion, Justice Kennedy wrote that "to constitute 'navigable waters' under the Act, a water or wetland must possess a 'significant nexus' to waters that are or were navigable in fact or that could reasonably be so made."

Following Rapanos, the regulatory agencies issued guidance attempting to define their jurisdiction in light of the decision. Consistent with Justice Kennedy's concurrence, the guidance allowed the agencies to assert jurisdiction over wetlands that have a significant nexus to downstream navigable waters, including consideration of hydrologic and ecologic factors.

To further clarify their jurisdiction, the agencies issued a new regulation defining "waters of the United States" in 2015 (the "2015 Rule"). This rule grouped waters and features into three categories: (i) waters that are jurisdictional by rule; (ii) waters that will be found jurisdictional only upon case-specific showing of a significant nexus with a primary water; and (iii) waters and aquatic features that are expressly excluded from jurisdiction. The regulation was controversial because it gave the agencies case-by-case discretion to determine if a specific wetland would be regulated, which some of the regulated community believed created too much uncertainty in land development decisions. The 2015 Rule was challenged in court by various parties, and as a result of litigation, implementation of the 2015 Rule is currently subject to an injunction in 13 states (Alaska, Arizona, Arkansas, Colorado, Idaho, Missouri, Montana, Nebraska, Nevada, New Mexico, North Dakota, South Dakota, and Wyoming).

After the Trump Administration took office, the president issued Executive Order 13778 ordering the regulatory agencies to review the 2015 Rule and to consider interpreting the definition of "navigable waters" consistent with the Rapanos-Justice Scalia plurality opinion. The agencies then published a notice indicating that this review would be undertaken in two steps—first, the 2015 Rule would be repealed; second, a new definition of "waters of the United States" would be promulgated. To repeal the 2015 Rule, the agencies finalized a rule setting the applicability date of the 2015 Rule as February 6, 2020, a date after the new "waters of the United States" rule would likely become effective. The proposed rule published on February 14, 2019, represents the second step of the process.

The table below summarizes how the proposed rule affects jurisdiction of, and regulation over, different categories of surface waters. 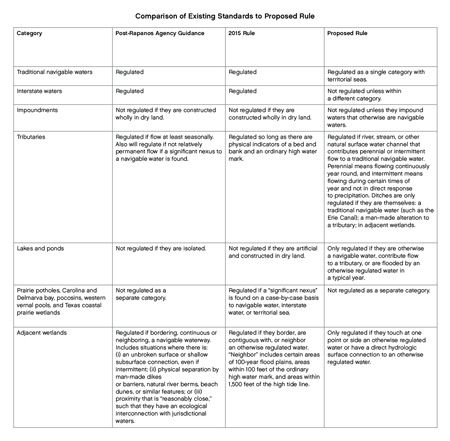 One significant change in the proposed rule is the justification for the regulation of "waters of the United States." Previous regulations justified jurisdiction over certain areas near or flowing into a wetland if there was a scientific basis for asserting that the area could significantly impact the water quality of the downstream navigable water. For example, the 2015 Rule discussed the use of a scientific report to draw conclusions about chemical, physical, and biological integration of wetlands and open waters in riparian areas and floodplains. In the proposed rule, the agencies assert that the purpose of the rule is instead to draw "the boundary between those waters subject to federal requirements under the Clean Water Act and those waters that States and Tribes are free to manage under their independent authorities." This means, for example, that the agencies would no longer have the discretion to regulate a wetland under a "significant nexus" standard.

Another shift is requiring a default assumption that an area is not a "water of the United States" unless the agencies conclusively prove otherwise. For example, one way that man-made ditches can be regulated is if the ditch were constructed in an otherwise regulated tributary by, for example, channelizing and straightening a meandering creek. It can sometimes be difficult to document whether a ditch was originally a tributary if aerial photographs or other historical documentation are not available. The proposed rule provides that the burden of proof would be on the agencies to locate sufficient documentation to demonstrate it is a former tributary and that, in the absence of such proof, the ditch would not be regulated.

The comment deadline for the proposed regulation is April 15, 2019. A public hearing was held on February 27 and 28, 2019, in Kansas City, Kansas. Court challenges to any final rule can be anticipated.