Over the past few years, states across the country have sought to limit or reduce the use of employee non-compete agreements. While some states have imposed outright bans on such agreements, many more have passed laws that narrow the scope or classification of an employee who may be subject to a non-compete.

A common restriction is to prohibit the use of non-competes for employees who earn below a certain threshold - e.g., annual compensation, hourly wage, percentage of poverty level, or FLSA status. Employers operating in multiple states across the country face a patchwork of regulations and need to keep their non-compete thresholds up to date. Setting calendar reminders for the annual wage updates and following the  Proskauer Non-Compete and Trade Secrets  page ensures that employers keep their agreements compliant with ever changing obligations. 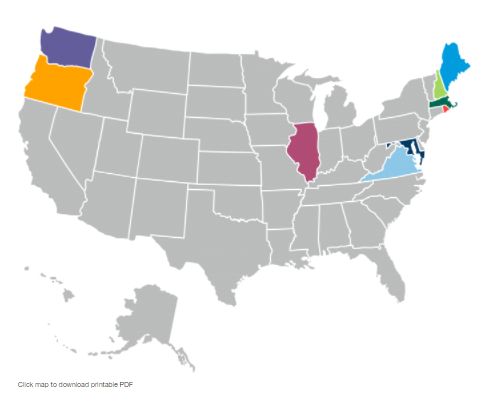 Prohibition on non-competes for employees earning wages at or below 400 percent of the federal poverty level (2021: $51,520).

Prohibition on non-competes for: (i) non-exempt employees; (ii) undergraduate or graduate students participating in internships or short-term employment; (iii) employees that have been terminated without cause or laid off; and (iv) employees under the age of 18.

Effective January 1, 2022, non-competes with employees will be void unless, among other things: (i) the exempt employee's annual salary at the time of termination exceeds $100,533 (adjusted annually for inflation); and (ii) the agreement is limited to a one-year duration.

Prohibition on non-competes for: (i) non-exempt employees; (ii) undergraduate or graduate students participating in internships or shortterm employment; (iii) employees under the age of 19; and (iv) employees whose average annual earnings (excluding overtime, Sunday, or holiday premiums) are less than 250 percent of the federal poverty level (currently $32,225).

Effective July 1, 2020, employers are prohibited from entering into non-competes with employees who earn less than Virginia's average weekly wage (about $1,200 per week or $62,000 per year).