by Hanson Hairihan (Chicago)
Mayer Brown
Your LinkedIn Connections
with the authors
To print this article, all you need is to be registered or login on Mondaq.com.

The CB Insights' State of Venture Report for the third quarter of 2022 notes that global venture funding declined to $74.5 billion in the third quarter, down 58% from the funding peak in the fourth quarter of 2021. This represents a quarter-over-quarter contraction of 34%, the largest quarterly percentage drop in a decade, with the number of deals declining by 10% to 7,936 – the lowest level since 2020. European startups experienced the largest decline in funding with 1,584 deals raising $14.8 billion in the third quarter this year, a 36% drop quarter over quarter and a seven-quarter low. The United States and Asia also saw sharp drops in quarterly funding with U.S. funding declining by 32% to $36.7 billion raised in 2,866 deals and Asia funding declining by 33% to $20.1 billion.

The number of companies that achieved unicorn status dropped across regions to 25, the lowest count since first quarter of 2020; 14 of these were in the United States. There were 144 mega-rounds completed globally in the third quarter, which accounted for $29.6 billion in funding, representing a 44% quarter-over-quarter decline and a nine-quarter low. While M&A exits continued to decline, IPOs and SPACs rebounded, with the number of SPACs reaching the highest level since 2021. 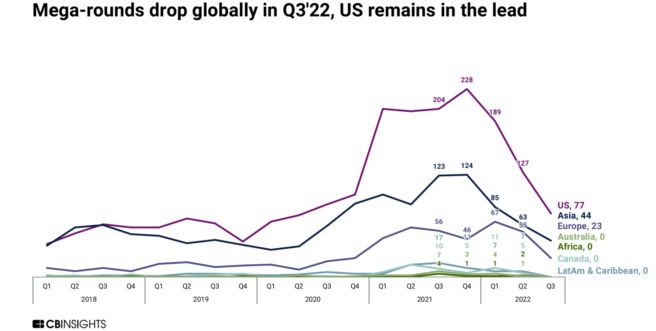