Class action spending by companies across industries increased for the second consecutive year, reversing a downward trend that occurred between 2011 and 2014. While the percentage of companies managing at least one active class action declined, returning to historic levels, companies perceived that the magnitude of their potential exposure and risk increased.

These were among the findings of the sixth annual Carlton Fields Class Action Survey released March 6. The law firm's survey, which is based on interviews with general counsel or senior legal officers at 373 companies operating in more than 25 industries, strives to help in-house counsel identify and manage the risks and costs of class action litigation. 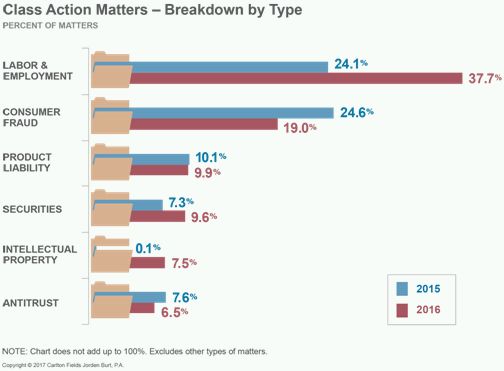 Although data privacy class actions were highly anticipated for several years, they remained a small percentage of matters overall. And just 11.1 percent of companies now predict that these matters will form the next wave of class actions. This may reflect the proactive steps many organizations have taken to prepare for and address possible data breaches, and the fact that plaintiffs have encountered difficulty establishing damages in these cases.

Companies instead predicted that wage and hour filings will continue to increase and, along with Telephone Consumer Protection Act (TCPA) cases, will form the next wave of class actions. The TCPA provides statutory damages for each unwanted call, text, or fax by a defendant who runs afoul of its requirements. As a result, these cases can represent large exposure. In addition, several district courts have decided that an unwanted solicitation is, indeed, an injury sufficient to confer standing. These courts have distinguished TCPA claims from those at issue in the Supreme Court's decision in Spokeo, Inc. v. Robins, which held that a plaintiff lacks Article III standing to sue in federal court under the Fair Credit Reporting Act absent an allegation of a sufficiently "concrete" injury. 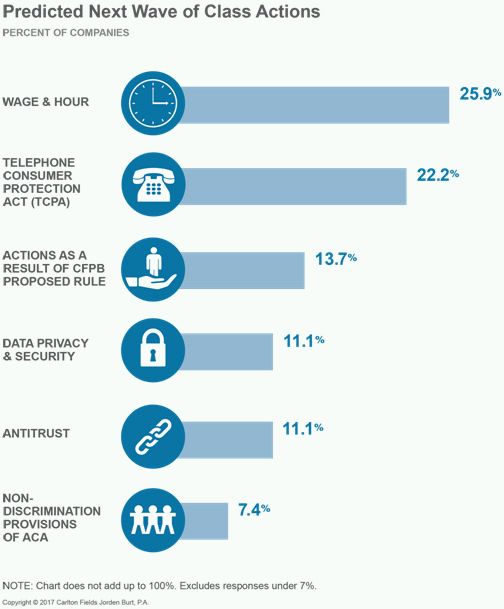 For many companies, class actions remained a part of everyday life. Just over 69 percent of companies reported handling one or more class actions on an ongoing basis, up from 68.5 percent in 2015. Both the routine and highest-risk categories of class actions reflected increases this year, indicating that companies face class actions that are more polarized in terms of complexity and exposure level. 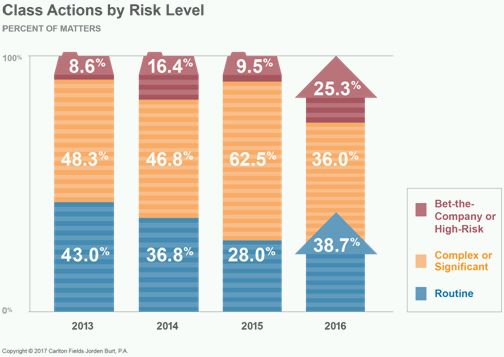 Though they increasingly face higher-risk and higher-exposure class actions, corporate legal departments continue to reduce the number of in-house attorneys responsible for managing those cases. Not surprisingly, these in-house attorneys are spending more time managing their class action caseloads. In-house attorneys now spend, on average, 13 hours per week per matter, up from an average of just six hours per week, per matter in 2011. In addition, companies are relying more heavily on trusted outside counsel to help them manage these cases from inception.

When evaluating the risks presented by class actions, exposure is still deemed the most important variable and "coming in under estimated exposure" remains a key determinant of success. Companies report that they resolve 62.5 percent of their class action lawsuits by settlement, and that most settlements occur before a class certification decision.

The use of alternative fee arrangements (AFAs) to manage class actions continued to decline. The percentage of companies that relied on AFAs in their defense of class actions dropped from 49.2 to 35.8 percent. This decline reflects the challenges inherent in using alternative fee structures to manage increasingly complex and unpredictable class action matters. Those companies that do use AFAs continue to favor fixed fee structures. 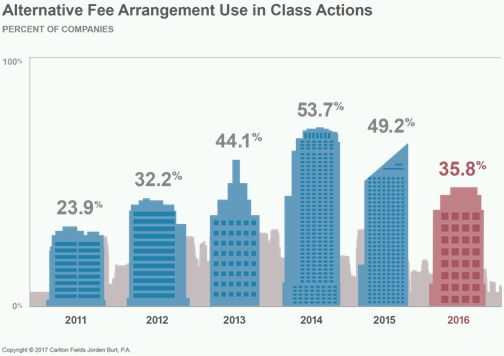