United States: Where Do The Civil Cases Reviewed By The Supreme Court From The Second District Originate (Part 3 – 2010-2019)

This week, we're concluding our series tracing the origin of the civil cases reviewed by the Supreme Court, District by District, since 1990.

First, we look at the population distribution for the counties that produced cases in the just-ended decade. DuPage County is at 30.67%. Lake County accounts for 23.49%. Kane is 16.98%, McHenry is 10.2% and Winnebago County is 9.38%. The remaining counties which produced cases – Kendall, Henry, Stephenson, Lee and Jo Daviess – were all much smaller than Winnebago. 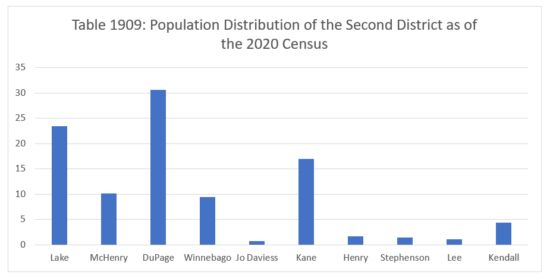 The distribution of civil cases over the past decade has more-or-less followed this population distribution. DuPage had cases at the Supreme Court in six of the ten years; Kane was there in seven years and Lake County had cases in seven years. Lake County had fifteen cases, DuPage County an even dozen and Kane County had nine. The rest of the docket was widely scattered – four cases from Winnebago County, two each from Stephenson and Kendall and one case apiece from McHenry, Jo Daviess, Henry and Lee Counties. 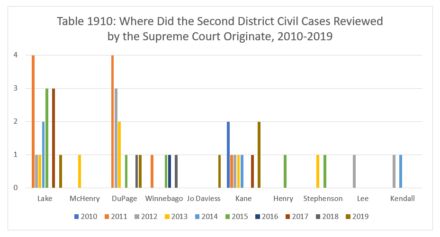 Next up – the Third District.