United States: If Dior Won't Make Johnny Depp Walk The Plank, Should The ASA Send Him To Davy Jones' Locker?

I was shocked, genuinely, truly shocked watching the football this weekend. Not because Tottenham Hotspur managed to hold on to top spot in the Premier League, but because Dior are still broadcasting their ill-fated ad campaign for Sauvage staring Johnny Depp. The campaign has already been the subject of considerable controversy, attracting accusations of cultural appropriation which we have written about before in this  blog. And now, it is attracting further controversy, with Dior continuing to use the campaign despite recent events in the High Court in London.

You may be forgiven for having been distracted by other news this autumn, such as the US Presidential Election, Coronavirus and Brexit. But the really big story of the season was the High Court decision in favour of The Sun newspaper in a defamation claim by Johnny Depp concerning allegations of domestic abuse against his ex-wife, Amber Heard.  In effect, the High Court concluded that The Sun's 'wife-beater' allegations were substantially accurate.  This is not the same as a criminal court convicting Mr Depp for assault, but it is extremely serious nonetheless. It seems that Mr Depp's piratical behaviour was not confined to his portrayal of Captain Jack Sparrow in The Pirates of the Caribbean franchise. In this case, life imitated art, and not in a good way.

So what should a brand do when the star of a campaign is suddenly disgraced? The first option is to check the Talent Agreement to see what provisions are made for the star to repay their fee in the event of them being disgraced. However, this is not straightforward. The contract may not contain any such provisions and even if they do, the brand may suffer more adverse publicity for suing the star, as well as giving the oxygen of publicity to the story that caused the disgrace in the first place. And the star's fee will only be a small part of the brand's losses anyway, dwarfed by the wasted investment in production and media, to say nothing of the reputational damage to the brand.

The brand also needs to be careful not to act precipitously. In this instance, although the High Court refused to grant Mr Depp leave to appeal, last week he exercised his right to lodge an appeal direct with the Court of Appeal. If you take the view that everyone should be presumed innocent until proven guilty, and have then exhausted every available avenue for appeal, it would surely have been appropriate for Dior to suspend their usage of the campaign, pending the outcome of the appeal. Or appeals, plural, as the Supreme Court may yet be asked to opine. That would make an interesting change from adjudicating on illegal conduct by the British government. Fortunately for Mr Depp, the formidable Lady Hale, her of the spider broach, has now retired. One suspects that she would be more than a match for Captain Jack in any kind of fight, whether with cutlass or case law.

So if eschewing a legal option, the brand may wish to check the terms of their Death & Disgrace Insurance. This could be the modern equivalent of a pirate map showing the location of buried treasure. Or in this case, a valid insurance claim. However, just as it is a common cinematic trope for the pirates to dig up the treasure chest only to find it is empty, claims on any kind of insurance policy often seem to leave one empty handed. And if you want to engage a star because of their 'bad-boy' image and history of a 'colourful' life-style, don't be surprised if Death & Disgrace Insurance is either unavailable, or prohibitively expensive.

So assuming Dior have no cushion for their losses, either contractual or through insurance, what should they do now? They have clearly opted to 'stand-by' Mr Depp, while continuing to show their ads in expensive ad breaks in the run up to Christmas. Some people see this as commendably loyal, including those fans posting on social media using the hashtag #Justiceforjohnnydepp, including one who posted "He's still the face of their cologne Sauvage, definitely gonna get me a bottle to show my support."

Many people, however, are less concerned Mr Depp's face and more concerned with Ms Heard's badly bruised face. Increasing numbers of people are questioning the decision to continue the campaign.  And Dior's decision to continue to broadcast their Johnny Depp ads flies in the face of all generally accepted wisdom about what a brand should do in these circumstances. Received wisdom is that they should terminate the campaign, or at least suspend it pending the ultimate outcome of Mr Depp's appeals. In the meantime, Dior should sever their links with Mr Depp, drop the campaign, and simply accept the fact they will have to absorb the financial losses. Dior has attracted criticism that they are cynically courting controversy and additional publicity by continuing to run a campaign starring a man who the High Court has found can accurately be described as a wife-beater. While the 'cancel culture' is also a cause of legitimate concerns, the High Court has effectively endorsed The Sun's damning description of Mr Depp. There are few worse things that can be said about a man.

So what can the ASA do? It has been reported that 11 people complained to them following the recent broadcast of the ad during the Great British Bake-Off. It would be interesting to know if people are continuing to complain. The ASA could potentially decide that by continuing to run the ad, Dior is "likely to cause serious and widespread offence" or failing to act "with a sense of responsibility to society".

The broadcasters might also like to consider whether they should continue to sell airtime for these ads. It would be unreasonable to refrain from broadcasting every film ever produced by Harvey Weinstein or to stop broadcasting the Pirates of the Caribbean films. This case, however, is different. The ad is a commercial communication, not a work of art, and features only one person who the High Court has found can legitimately be described as wife-beater. Its continued broadcast is already causing serious offence to those viewers who have complained.

It could also be seen as an irresponsible insult to the victims of domestic violence, most of whom are women, like most of the consumers of Dior's other products. On that basis, Dior might find that even if their decision drives sales of Sauvage this Christmas, but it may damage sales of their other products, as well as their core brand, for many years to come, even if Mr Depp ultimately succeeds in this appeals.

Now would be a good time to put Captain Jack in the brig, metaphorically speaking, at least until his legal action finally reaches land.

"We have received a total of 11 complaints about this ad," a spokesperson for the Advertising Standards Authority said, "with the complainants believing that Johnny Depp shouldn't be in the ad due to details concerning his recent court case." 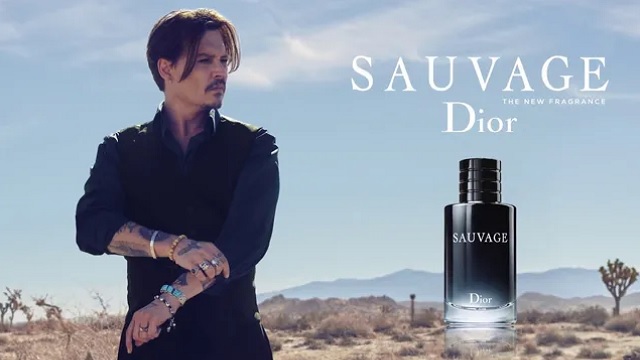