by Christian B. Jones
BakerHostetler
0 Liked this Article

Congress wants to green-light federal standards for self-driving vehicles, but questions over safety and added infrastructure costs have some lawmakers pumping the brakes.

The delay is giving rise to a patchwork of state-based regulations governing autonomous vehicles that could hinder interstate travel and commerce, according to advocates of robo cars. U.S. manufacturers and technology companies are investing millions of dollars in research and testing, and they fear that if Congress doesn't act soon, other countries could get a head start on innovation. China has pledged to deploy 30 million autonomous vehicles within a decade.

Separate bills in the House and Senate would create the first federal regulatory framework to develop and test autonomous vehicles. Both bills would preempt state rules and create national guardrails around the emerging industry but leave details to be filled in later by federal transportation regulators.

The Trump administration, which supports federal regulations, is trying to drive consensus among stakeholders. Transportation Department officials in March met with vehicle manufacturers, technology companies, unions and consumer groups to try to address the technical, legal and safety questions.

The House passed its bill in July 2017 by a voice vote after it won unanimous approval in the Energy and Commerce Committee – rare feats of bipartisanship in politically toxic Washington. The legislation was introduced by Rep. Bob Latta, R-Ohio, the chairman of the panel's Digital Commerce and Consumer Protection Subcommittee. 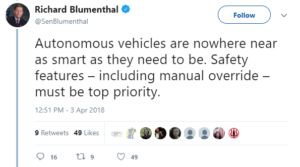 "I'm not a luddite," Sen. Richard Blumenthal, D-Conn., said. "I'm not simply standing in the way of progress. I believe that autonomous or driverless vehicles will be coming. But in the meantime, while we're developing them, they have to be safe."

The death in March of a pedestrian struck by a self-driving Uber vehicle in Tempe, Arizona, renewed calls by Blumenthal and other senators for additional safety measures.

Blumenthal also wants injured passengers to be able to sue manufacturers, instead of seeking remedies through arbitration. Adding arbitration would mean that a separate House committee – the Judiciary Committee – would have jurisdiction over that portion of the legislation, potentially complicating and delaying its passage in the House.

Another opponent of the current legislation, Sen. Ed Markey, D-Mass., raised concerns about cyberattacks. A Transportation Department report found that stakeholders in the March meeting "agreed that it is a question of when, not if, there is a massive cyber security attack targeting" autonomous vehicles.

State transportation officials have warned Congress that ensuring America's roads, bridges and highways – in both rural areas and inner cities – are compatible with autonomous vehicles would cause infrastructure costs to mushroom. Sensors would need to be embedded on nearly all of the nation's four million miles of roadways, and new striping and signage that can easily be read by both humans and automated vehicles would need to be installed. 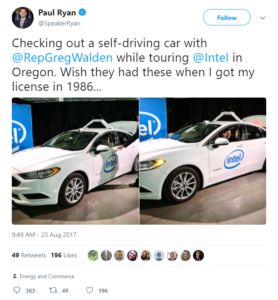 Atlanta last year created a smart-traffic corridor along one of its roads, including upgraded striping and traffic-sensing cameras. Officials estimate making the entire city accessible would require 50,000 environmental sensors, 20,000 pedestrian and mobility sensors, and 10,000 traffic-sensing cameras – at a cost of more than $50,000 per mile.

"On any given day in New York City, there are a thousand holes being cut into our streets, so the notion that our striping will always be pristine and visible [to autonomous vehicles], I think it is not likely," Trottenberg said. "It is simply not realistic or feasible to expect cities to overhaul their existing roadway infrastructure to accommodate a still somewhat unproven technology."

Congress has dwindling time before the November midterm elections to address the safety, legal and financial issues. Despite the unanimous House vote and Senate committee vote, major compromises will be needed on arbitration language and possibly preemption for the bill to proceed to a vote in the Senate.

Latta said Congress must act before the end of the year. 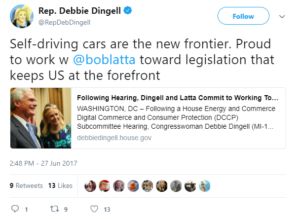 While Congress continues to debate the issue, auto manufacturers and technology companies like Uber and Google subsidiary Waymo are racing ahead with development and innovation. Today, countless self-driving cars are being tested on public roadways right next to human-driven sedans, minivans, SUVs and tractor trailers. For example, Waymo's autonomous test cars have cumulatively driven more than five million miles, including more than two million miles since May 2017.