On Thursday, January 30, 2020, the Board of Governors of the Federal Reserve System (Federal Reserve) finalized revisions to its rules (Rule) related to control determinations for investments in banks, savings associations and their holding companies (collectively a "bank" or "banks") by entities, other than individuals.1 In the explanation accompanying the Rule, the Federal Reserve states that, at some future date, it "may" consider making conforming changes to questions related to control in its rules governing Change in Bank Control Act notices, insider lending and affiliate transactions.

The Rule was finalized substantially as initially proposed in spring 2019, and it clarifies the Federal Reserve's existing rules and interpretations related to control determinations, which were ambiguous and not always transparent. In addition, the Rule relaxes some previous presumptions of control, and it eliminates the practice of passivity agreements, except that the Federal Reserve will continue to obtain control-related commitments in specific circumstances, such as employee stock ownership plans, mutual fund complexes and special situations. Investors that have entered into such agreements with the Federal Reserve are invited to seek relief from those agreements.

Many investors in banks structure their investments to avoid a control determination, and the accompanying supervision and regulation by the Federal Reserve. The Rule provides a clearer path for investors to make non-controlling investments in banks by establishing a more comprehensive and public framework to determine what constitutes control. The Rule eliminates some, but not all, of the uncertainty related to such investments and helps to ensure that presumptions of control are applied by the Federal Reserve in a clearer and more transparent manner. Additionally, the Rule adopted control-related presumptions relating to divestiture of investments.

The Rule Retains Longstanding Presumptions of Control; Adopts a New Presumption of Noncontrol; and Relaxes Provisions Related to Total Equity

In contrast, an investor with 25% or more of any class of voting shares is presumed to be in control of the bank.

The Rule includes a methodology for calculating what constitutes total equity of a bank. In general, total equity is calculated by (1) determining the percentage of each class of voting and nonvoting common or preferred stock issued by the bank; (2) multiplying the percentage of each class of stock controlled by the investor by the value of shareholders' equity allocated to the class of stock under US generally accepted accounting principles (GAAP) (with retained earnings allocated to common stock); and (3) dividing the investor's dollars of shareholders' equity by the total shareholders' equity of the bank, as determined under GAAP. For purposes of this calculation, debt instruments will be treated as equity if the interests are functionally equivalent to equity. The Rule sets forth characteristics that may indicate that the debt instrument is functionally equivalent to equity, including extremely long-dated maturity; subordination to other debt instruments issued by the investor; qualification as regulatory capital under any regulatory capital rules applicable to the investor; qualification as equity under applicable tax law or GAAP; inadequacy of the equity capital underlying the debt at the time of issuance; or issuance not on market terms. On the other hand, equity instruments will be excluded from total equity if the instruments are determined to be functionally equivalent to debt. The Rule includes a non-exclusive list of characteristics that could indicate that an equity instrument may be functionally equivalent to debt, such as protections generally provided to creditors; a limited term; a fixed rate of return or variable rate of return linked to a reference interest rate; and classification as debt for tax or accounting purposes.

The Rule provides clarity for investors with respect to noncontrolling investments between 5% and 25% of any class of voting shares of a bank by applying the Federal Reserve's new "tiered" framework. Yet, under the Rule, the Federal Reserve does retain discretion to (1) find control based upon the facts and circumstances of a particular case within those share ownership thresholds; and (2) raise safety and soundness or other concerns regarding either controlling or noncontrolling relationships.

The tiered framework is structured so that as an investor's ownership percentage in a bank increases, the additional relationships and other factors considered must decrease to avoid control. Within the percentage ownership range of between 5% and 25%, the Federal Reserve adopts a series of presumptions of control, and if an investor does not meet any of those presumptions, then an investment may be able to proceed without application or confirmation from the Federal Reserve

The framework for the presumptions of control is divided into two categories:

See the attached Appendix for a detailed table released by the Federal Reserve in conjunction with the Rule that applies these two categories and how they work together within this new tiered framework.

Additionally, the scope of the relationships between the investor and a bank are discussed in more detail below, as well as a number of other important aspects involving presumptions of control that were part of the Rule, including with respect to divesting control of a bank.

The Rule also increases the roles that director representatives may have on board committees. Historically, the Federal Reserve has presumed control when an investor's representatives on a board comprise more than 25% of the members of any committee or any of its directors served on a committee with the power to bind the bank. In addition, the Federal Reserve has prohibited such directors from serving as chair of the board. Under the Rule, if an investor controls less than 10% of voting shares, there are no restrictions on committee membership. If the investor controls between 10% and 24.99% of voting shares, its director representatives may constitute no more than 25% of a committee with the power to bind the bank. Additionally, the Rule permits investors controlling less than 15% of the voting shares to have a director representative serve as the chair of the board.

Investors with more than 10% of the voting shares of a bank may solicit proxies related to the selection of directors as long as the solicitation would not exceed the total percentage of directors permitted without triggering control (i.e., less than one quarter). Additionally, in contrast to prior control determinations, the Rule did not adopt a presumption of control for a company that solicits proxies from the shareholders of another company. Accordingly, under the Rule, a noncontrolling investor generally may act as a shareholder and engage other shareholders on issues through proxy solicitations. This creates some additional flexibility for investors that have an interest in specific issues.

In those cases in which an investor owns more than 5% of the voting sharing of a bank, the Federal Reserve is concerned about contractual provisions in shareholder agreements, investor agreements, debt relationships or other business relationships that restrict the discretion the bank has over major operational or policy decisions. The Rule includes examples of contractual rights that the Federal Reserve considers to be "limiting" and that give rise to a presumption of control.

Some of these contractual rights include (1) limits on an ability to merge or consolidate, or its ability to sell, lease, transfer, spin-off, recapitalize, liquidate, dissolve or dispose of subsidiaries or assets; (2) prohibitions on entering into new lines of business, making substantial changes to, or discontinuing, existing lines of business, or entering into contracts imposing significant financial obligations; (3) restrictions on significant investments or expenditures; (4) restrictions on an ability to pay or not pay dividends, change its dividend payment rate on any class of securities, redeem senior instruments or make voluntary prepayment of indebtedness; (5) restrictions on hiring, firing or compensation of senior management officials; and (6) restrictions on the authorization or issuance of additional junior equity or debt securities, or amending the terms of any outstanding equity or debt securities.

The Rule also includes examples of contractual rights not considered to be "limiting," such as (1) restrictions on the issuance of securities senior to the noncommon stock securities controlled by the investor; (2) a market standard "most-favored nation" requirement that an investor receive similar contractual rights as those held by other investors in the bank; and (3) provisions that entitle the investor to receive financial reports ordinarily available to common stockholders.

There are no limits on business relationships for purposes of the control determination if the investor owns less than 5% of any class of voting shares. The Rule also takes into consideration whether the terms of the business relationship are on market terms, and if not, and the investor owns between 10% and 24.99% of any class of voting shares, then the Federal Reserve presumes that the investor controls the bank. While certain business relationships may not be limited for purposes of the control determination, investors may be restricted by other rules and guidance, including independence tests for directors who may be affiliated with an investor.

Other Presumptions of Control

In addition to the tiered framework, the Rule addresses other scenarios that would trigger a presumption of control.

Historically, the Federal Reserve's control presumptions regarding divestiture of control have been more restrictive than presumptions related to investments. In some cases, this has made it difficult for an investor previously deemed to have a controlling interest to terminate an existing control relationship. The Federal Reserve has taken the position that an investor that has controlled a bank for a significant period may be able to exert control over the bank even after a substantial divestiture. As a result, the Federal Reserve typically has required an investor to divest to below 5% of voting shares to terminate an existing control relationship.

(Presumption triggered if any relationship exceeds the amount on the table) 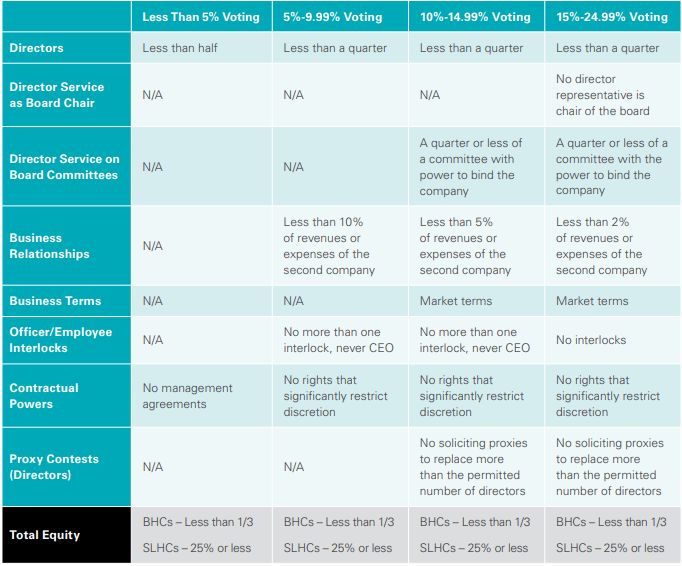 The Rule eases that standard and allows investors to sever control relationships, while retaining greater levels of ownership. Under the Rule, the Federal Reserve presumes that an investor is no longer in control if:

While the Rule does not represent a significant shift in policy for the Federal Reserve, it does provide much-needed clarity and transparency to a highly technical set of rules and does provide some additional flexibility for investors. The Rule is effective April 1, 2020.

1. The rule also applies to investments by bank holding companies in nonbank entities and may have implications for investments by depository institutions in nonbanks because of cross-references in the Federal Deposit Insurance Act.

2. The total equity presumption of control for SLHCs differs due to the Home Owners' Loan Act (HOLA), which provides that when a person has contributed capital of more than 25% of an SLHC, such person controls the entity. In the Rule, the Federal Reserve clarifies that contributed capital for purposes of HOLA generally has the same meaning as total equity as used in the context of control under the BHCA. Therefore, the total equity limit applicable to SLHCs is 25%, by operation of HOLA.