UK: A Shape Or Colour Mark?

by Martyn Fish
HGF Ltd
Your LinkedIn Connections
with the authors

The latest on the Christian Louboutin red sole trade mark

The Christian Louboutin red sole trade mark is one of the most well-known "non-traditional" trade marks, not least because of the scrutiny that it has been subjected to by various courts. In the latest round of litigation which reached the CJEU (The Court of Justice of the European Union) the trade mark registration appears to have survived an attack on its validity.

Christian Louboutin registered a trade mark in Benelux for 'footwear' in 2010 and for 'high-heeled shoes' in 2013. The trade mark was described as consisting

It was also represented as follows: 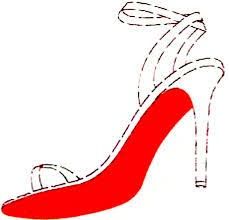 Louboutin brought trade mark infringement proceedings in the Netherlands against Van Haren, a shoe retailer. Van Haren counter claimed that the trade mark was invalid. The issue was then referred by the District Court of the Netherlands to the CJEU.

The basic issue that the CJEU had to grapple with was the question of what the trade mark covers; is it the shape of the product, the colour of the sole or a combination of both? If court considered the mark to be a shape mark, then its validity could be questioned on the grounds that the shape gives substantial value to the goods themselves.

Before the CJEU decision it wasn't looking good for Louboutin. The referring Dutch Court considered that the mark at issue was "inextricably linked to shoe soles" and "covered not only the three-dimensional properties of goods (such as their contours, measurements and volume), but also colours". The Attorney General's opinion provided to the CJEU also suggested that the mark could be a shape and colour mark and therefore in theory, the Louboutin red sole mark could be invalid.

However, the CJEU did not agree. It decided that the Louboutin mark did not relate to a specific shape of sole for high-heeled shoes as the description of the mark explicitly states that the contour of the shoe does not form part of the mark and is intended purely to show the positioning of the red colour covered by the registration. The mark was therefore not for a sign that consisted exclusively of the shape of the goods.

"It cannot.....be held that a sign consists of that shape in the case where the registration of the mark did not seek to protect that shape but sought solely to protect the application of a colour to a specific part of that product".

This case highlights how important it is when applying for non-traditional trade marks to make it very clear as to what the sign is that you are trying to protect. Without the clear description in this case that no protection was sought for the contour of the shoe, it would have been harder for the CJEU to hold that the mark was not a shape mark. The validity of the mark could then have been called into question on the specific grounds that relate to shape marks.

Further, it is important to remember the basic issue that the sign in question must function as a trade mark. It will not have been lost on the CJEU that the referring Dutch Court held that a significant proportion of consumers of women's high-heeled shoes in the Benelux States were able to identify Louboutin shoes as goods originating from that producer and therefore able to distinguish them from women's high-heeled shoes from other undertakings. The sign passed the vital test that it is perceived as a trade mark in relation to the relevant goods.

ARTICLE TAGS
UK Intellectual Property Trademark
POPULAR ARTICLES ON: Intellectual Property from UK
Of Molecules & Medicine: A New Focus On Antibodies In 2021 Update To EPO Guidelines
Haseltine Lake Kempner LLP
Today, 1 March 2021, a whole new Guidelines section focusing on antibodies will enter into force.
High Court Judgment Highlights Importance Of Professional Representation
J A Kemp LLP
The recent case of Reaux-Savonte v Comptroller-General of Patents ([2021] EWHC 78 (Ch)) concerns an appeal from a decision of the Comptroller General, dated 19 May 2020...
How To Prove 'Passing Off'
Gowling WLG
'Passing off' does not have a statutory basis and doesn't need to be registered to be effective.
Getting Your Timing Right - Demonstrating Plausibility And When To File A Second Medical Use Patent
Haseltine Lake Kempner LLP
Deciding when to file a patent application can be a difficult decision.
Distinctly Different? Trade Marks And The Standards For Distinctiveness
Gowling WLG
The growth of the online world has meant that many brands which previously would have been accessible by and promoted to a section of society are now available to the world.
New EPO Guidelines For Examination Come Into Force
J A Kemp LLP
As discussed in our earlier news item here, one aspect of note in the new Guidelines is the introduction of a stricter approach to amending the description for conformity with the claims.
FREE News Alerts
Sign Up for our free News Alerts - All the latest articles on your chosen topics condensed into a free bi-weekly email.
Register For News Alerts
Article Tags
UK Intellectual Property Trademark
Related Articles
Repositioning A British Brand: A Celebration Of British Pie Week Marks & Clerk
How Patent Attorneys Start Their Career At HLK Haseltine Lake Kempner LLP
Antibodies In The European Patent Office - Basic Principles J A Kemp LLP
Antibodies In The European Patent Office - Advanced Guide To Drafting And Prosecution J A Kemp LLP
Covid-19: State Intervention In Times Of Vaccine Shortages Morrison & Foerster LLP
Mondaq Webinars
International Transfer Pricing Trends from a Swiss Perspective - Practical Tips and Lessons Learned
Tax Partner AG
Webinar Zurich Switzerland
Survival Kit for the Latest Trends in U.S Trade Enforcement
Braumiller Law Group, PLLC
Webinar Texas United States
More Webinars
Comparative Guides
Anti-Corruption & Bribery
Banking Regulation
Blockchain
Cartels
Corporate Tax
Mondaq Advice Centres
UK
Coming to and Investing in the UK
Global
Trademarks in SAARC Countries
Global
Investment Immigration
More MACs
Upcoming Events
Patenting Antibody Pharmaceuticals At The EPO
J A Kemp LLP
Webinar London UK
Mondaq Social Media