In this article for  Intellectual Property Magazine, Mathys & Squire associate Max Thoma and technical assistant Oliver Parish  consider the importance of drawings in determining the scope of a registered design.

The pivotal issue in dispute was how to interpret the fine black lines shown on the shoe upper in Rothy's RCD. 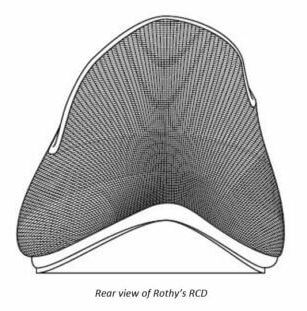 The defendant, Giesswein, argued that the black lines merely showed that the shoe is a three-dimensional shape, and that if the black lines did indicate any surface design feature, that feature was a textured appearance generally (including any knitted, woven or animal hide materials, but excluding smooth textures) rather than any specific material.

The claimant, Rothy's, encouraged the Judge to zoom in on the high-resolution digital images of the RCD which show that the black lines radiate in a circular pattern at the heel and toe of the shoe.  Such a pattern, it was argued, is specifically indicative of a knitted fabric rather than a textured appearance more generally.

The judge agreed with the claimant, noting that certain aspects of the patterning of the lines were inconsistent with a woven fabric or unprinted animal hide such as nubuck or suede.  The lines were therefore held to indicate a knitted fabric (such as that present in the "Pointy Flat" shoe), rather than any of the alternative textures suggested by the defendant.

The judge went on to find that, whilst knitted fabrics were known for shoe uppers on gym shoes and sneakers, the notional informed user would not be aware that they had been applied to the types of shoe in question.  The use of a knitted fabric on such a shoe would thus stand out to the informed user as a significant departure from existing designs.

As such, the judge decided that the "Allegra K" and "Bonnibel" suede shoes of the prior art would produce a different overall impression on the informed user than the knitted shoe of the RCD.  For this reason, the RCD was found to be valid.

However, on the question of whether Giesswein's "Pointy Flat" shoe was copied from Rothy's "Pointed Loafer" – an essential criterion for establishing infringement of the UCD – the judge decided that the designers of Giesswein's shoe had sufficiently explained how the shoe was independently designed.  Therefore, Rothy's UCD was found to be valid but not infringed.

Rothy's succeeded in their registered design claim due to their carefully prepared design drawings, which effectively gave them IP protection over the material and texture of their shoes.

This decision serves as a reminder, further to PMS International Group Plc v Magmatic Limited (i.e. the "Trunki" case), as to the importance of the drawings of a registered design.  Care should be taken in the preparation of suitable drawings for a registered design application so as to optimise the scope of protection provided.  Creative design drawings should also be considered to protect important features.  This decision also shows that that a Court may 'zoom in' to design drawings to look at subtle details – emphasising the importance of high-resolution images showing such details.

This article was originally published in Intellectual Property Magazine  in March 2021.

ARTICLE TAGS
UK Intellectual Property Trademark Litigation, Mediation & Arbitration Trials & Appeals & Compensation
POPULAR ARTICLES ON: Intellectual Property from UK
Due Diligence - Blood, Sweat And Tears Required?
Marks & Clerk
Over the last few months I have been following updates to the trial of Elizabeth Holmes in "The Drop Out" podcast.
Nike Enters The Metaverse
Marks & Clerk
This is a clear reflection of the intention of brand owners to monetise the metaverse via the sale of virtual goods.
New AI Consultation - UK Considering New Types Of IP Protection
Marks & Clerk
On 29 October 2021, the UK IPO launched a further consultation on IP Protection and AI.
How To Prove 'Passing Off'
Gowling WLG
'Passing off' does not have a statutory basis and doesn't need to be registered to be effective.
UK Government Launches Intellectual Property And Artificial Intelligence Consultation
Mathys & Squire
The UK Government officially launched its consultation on intellectual property (IP) and artificial intelligence (AI) on 29 October 2021, as part of the National AI Strategy (see our summary here)...
The Stormtroopers Strike Back In Attack Of The Copyright
Marks & Clerk
I was interested to read this article in the Times recently, as it is a cautionary tale of Copyright and other unregistered rights.
FREE News Alerts
Sign Up for our free News Alerts - All the latest articles on your chosen topics condensed into a free bi-weekly email.
Register For News Alerts
Article Tags
UK Intellectual Property Trademark Litigation, Mediation & Arbitration Trials & Appeals & Compensation
Related Articles
UK Government's Consultation On Artificial Intelligence And The Interaction With Copyright And Patents Mayer Brown
Peloton Faces Patent Challenges In The Race To Beat The Competition Marks & Clerk
Are Brick-and-mortar Stores Making A Comeback? Marks & Clerk
Electric Vehicles Taking Off Marks & Clerk
Green® Marks & Clerk
Mondaq Webinars
What Can Be Achieved in Luxembourg in Terms of Securing Assets in Pre-Trial, Pre-Enforcement Situations?
Bonn Steichen & Partners
Webinar Luxembourg Luxembourg
Hot Topics in Fund Finance [REPLAY]
Cadwalader, Wickersham & Taft LLP
Webinar New York United States
More Webinars
Comparative Guides
Anti-Corruption & Bribery
Artificial Intelligence
Banking Regulation
Blockchain
Cartels
More Guides
Mondaq Advice Centres
UK
Coming to and Investing in the UK
Global
Trademarks in SAARC Countries
More MACs