The year since the signing of the Paris Agreement has marked a breakthrough for renewables. Even though investment in clean energy projects around the world slipped 18 percent to US$288 billion by the end of 2016, according to the latest figures from Bloomberg New Energy Finance, the total capital outlay still eclipsed that spent on fossil fuel exploration and production for the second year running. The energy transition is well underway.

Wind power sped past an installed capacity of 430 GW last year, on a trajectory to reach 2,110 GW by 2030, a build out that could translate into a steady annual investment of some US$220 billion. Solar fired up a further 50 GW, taking installed capacity to almost 230 GW. It could be ten-fold that by the end of the next decade.

Seen historically, 2016 capped a revolutionary decade for renewables, during which these two leading new energy industries expanded at average annual growth rates of 23 percent and 50 percent respectively, greatly aided by unprecedented cost reductions: since 2010, the price of wind turbines has dropped 45 percent, and solar modules are now 80 percent cheaper.

For Europe, specific challenges remain—not least the inconvenient truth that investment has in fact been sliding in the EU-28, slipping to US$60 billion in 2015 from US$135 billion in 2011. New money is now pouring into emerging markets including India, Chile and Mexico. 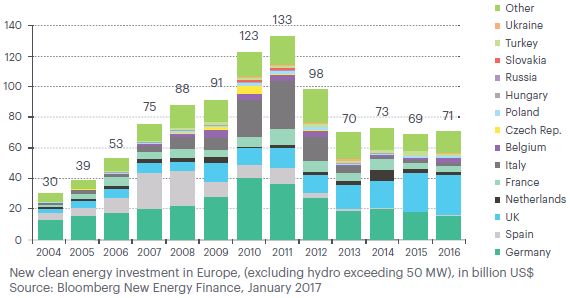 The European Commission's long-awaited Energy Union package unveiled late last year should restore faith in investing in the EU's transition to a cleaner power system. Key to the plan's eight legislative proposals to shape renewables deployment and electricity markets to 2030 is one clause that requires member states to give at least three years' visibility on their support schemes and another— the "grandfathering" or "Spanish" clause—that will make it much harder for governments to change policies and support schemes retroactively. Together, these would provide an unprecedented boost to industry and investor certainty that would help cut the cost of capital and bolster confidence in spending on R&D and innovation.

The fact that industrial scale renewable energy generation has graduated from technical feasibility to economic competitiveness with status quo power sources will not on its own achieve the avowed ambition of the EU's 2030 emissions targets and the Paris Agreement which is to limit temperature rises to 1.5°C above pre-industrial levels through total decarbonization of the world's energy system. What could, however, is an energy transition fueled by a technology-led US$15 trillion investment opportunity, more transformative to the global economy than the Industrial Revolution.

The race is far from run. As recent quarterly data from Bloomberg New Energy Finance has shown, worldwide renewables spending lagged significantly year-on-year as China "paused for breath" in its wind and solar construction campaign. But, given the trend in investment away from old and into new energy sources, renewables are finding a marathoner's pace. And investors are keen to back a winner.

This guide provides snapshots of the renewable energy sources (RES) sector in 16 jurisdictions in Europe and Central Asia where Dentons has offices. We look at the potential for RES development, the factors which have driven and continue to drive the industry and the constraints and risks faced by investors.

For those countries which are member states of the European Union or parties to the Energy Community Treaty, which extends some of the EU's energy policies to neighboring countries, Directive 2009/28/EC of the European Parliament and of the Council of 23 April 2009 on the promotion of the use of energy from renewable sources (the Renewable Energy Directive) and EU policy on state aid have had a significant influence in shaping their approach to RES.

The Renewable Energy Directive forms part of an overall EU energy policy framework that includes the goal of sourcing 20 percent of final energy consumption from RES (and 10 percent of fuel in the transport sector from RES).

This EU target has been translated into individual targets for the energy sector in each member state. A progress report issued by the European Commission in June 2015 shows that with a projected share of 15.3 percent of RES in 2014, the EU is making progress towards its target. Out of 28 member states, 25 are expected to meet their 2013/2014 interim renewable energy targets. The most recent data made available by Eurostat are as of July 2016.

The development of RES in the EU was first stimulated through the implementation of national support schemes for RES electricity in the form of either "green certificate" schemes (in which wholesale purchasers of electricity must meet a certain quota of RES electricity, evidenced by tradable certificates issued to RES power producers), or "feed-in tariff" (FIT) schemes (in which RES producers are paid a sector-specific price that replaces wholesale power market prices or supplements them by a fixed amount regardless of how they may fluctuate).

However, the application of these forms of subsidy, which were awarded automatically to all qualifying projects without any overall budgetary limit, is being cut back in various ways or replaced altogether by forms of support based on competitive auction processes, often involving competition between different RES technologies. The European Commission's State Aid Guidelines on Environmental Protection and Energy 2014-2020 (the Guidelines) have played a major part in this change, but it has also been driven by government and consumer concerns about the rising cost of RES subsidies (for electricity bill payers or taxpayers) and facilitated by falling technology costs in the wind and solar sectors.

In November 2016, as part of its "Energy Union" project, the European Commission issued a package of legislative proposals, including amendments to the Renewable Energy Directive, which, if adopted, will have a significant impact on future RES projects, particularly post 2020. The proposals touch in one way or another on all the "hot topics" of the RES sector and include:

The Energy Union reforms will take some time to negotiate and implement. In the meantime, national authorities will continue to seek to address many of the same issues tackled by the European Commission—such as how to facilitate energy storage or how to grow the renewable heat market— with their own measures. Increasingly, the promotion of RES is not just about subsidies but about dealing with the consequences of extensive RES deployment on the wider energy system. Operators will need to be alert to the potential impacts of new proposals and ensure that they are fully understood by governments and regulators. 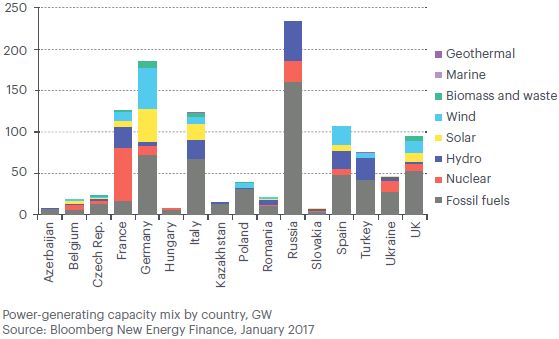 To read this Guide in full, please click here.