UK: Does Recent Tencent Case Indicate A Shift In The Way Companies Deal With Patent Trolls?

In a recent case before the Guangdong High Court, damages were awarded to Tencent in a tort action against a patent owner as a result of litigation by the patent owner that was found to be malicious. In Tencent v. Tan Fawen., [(2019) GD. Civil. Fin. No. 407] (June 10, 2019), the Guangdong Higher People's Court affirmed 500,000 Yuan awarded to Tencent by the Shenzhen Intermediate People's Court of Guangdong Province in an action against Tan Fawen.

A 'patent troll' or 'patent squatter' is a company or individual who acquires design patent rights with the intention of making improper gains from the patent against a genuine rights owner. The design patents registered by patent trolls are often copied from copyrighted content with a view to harass the copyright owner by initiating patent litigation. Such copying is possible due to the lack of substantive examination of design patents in China. Companies will often choose to settle actions initiated by patent trolls so as to avoid the expense of resolving disputes through the courts.

In January 2010, Tan Fawen registered a 'Mini Penguin' design patent which copied Tencent's copyrighted and trademarked 'QQ Penguin' logo. After registering the design patent, Tan Fawen started selling speakers with the 'Mini Penguin' image. As a result, Tencent brought an action before the Shenzhen Futian District People's Court against Tan Fawen in March 2011 for infringement of the copyright and trademark of their 'QQ Penguin' logo. 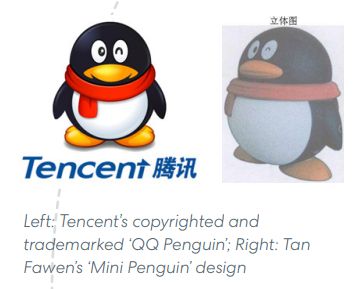 Tencent were able to get the design patent invalidated by The State IP Office by demonstrating the substantial similarity between Tan Fawen's 'Mini Penguin' and Tencent's prior trademarked and copyrighted 'QQ penguin'. As a result of the invalidation of the design patent, the Shenzhen Intermediate People's Court rejected Tan Fawen's infringement action.

Tencent then filed the tort action against Tan Fawen in 2018, seeking damages for Tan Fawen's infringement lawsuit which they considered to be malicious since Tan Fawen knew his design patent was invalid. Before the Shenzhen Intermediate People's Court, Tencent alleged that Tan Fawen had intentionally registered the design patent for the 'Mini Penguin' which copied their well-known 'QQ Penguin' image and had deliberately refused to comply with the settlement of the earlier infringement case.

The court considered that the following requirements should be met to determine whether an intellectual property lawsuit is maliciously filed:

Regarding requirement 2, the socalled maliciousness means that the party making the request knows that the request lacks justified reasons, improperly exercises the right of litigation against the other party, and intends to cause the other party to suffer damage. In this case, the court determined that Tan Fawen's actions were malicious because he knew and acknowledged from the earlier settlement with Tencent that his 'Mini Penguin' design patent copied Tencent's 'QQ Penguin' image.

The Shenzhen Intermediate People's Court therefore determined that the litigation was malicious and that Tan Fawen filed a patent infringement lawsuit against Tencent knowing that his request lacked a valid reason, causing economic losses to Tencent. The court ordered Tan Fawen to pay Tencent 500,000 Yuan in compensation.

It is worth noting, in this case, that the previous infringement settlement between Tencent and Tan Fawen influenced the court's view of the case. The court noted in their decision that, from the earlier settlement, Tan Fawen knew that his design patent was basically the same as Tencent's copyrighted works of art, and that he made a clear commitment to withdraw the patents involved. It therefore appears that the earlier agreement by Tan Fawen to abandon or transfer the design patent was ultimately seen by the court as an acknowledgement of the impropriety of the design patent and thus confirmed that the subsequent litigation was not justifiable and violated the principle of good faith. The earlier settlement therefore made it easier for the court to conclude that Tan Fawen knew the infringement claim lacked the right basis and was filed improperly.

Furthermore, given the circumstances, the court may have felt that it was necessary for such a violation of the principle of good faith to be punished in order to set a precedent for similar cases and to discourage patent trolls. The ruling is in line with a wider effort in China to minimise dishonest and malicious litigation. It could be argued that this effort to clamp down on such cases also, in turn, increases the protection conferred by registered trademarks and copyright or, at the very least, improves the enforceability of these rights against the improper rights of patent trolls.

While it may be unlikely that the malicious litigation ruling will have an immediate impact on the behaviour of patent trolls, this case may well have an effect on the way in which companies deal with patent trolls in the future. Many big companies have a history of settling cases with patent trolls and it is possible that the intention of the tort action by Tencent was to send a message to other parties looking to exploit Tencent's IP rights. Alternatively, the tort action may have been a result of the value of the 'QQ Penguin' to Tencent and their desire to protect an image that is so strongly associated with their brand. Either way, it will be interesting to see whether this decision causes Tencent and other companies to take a stronger stance against patent trolls in the future.

Given their profile, Tencent's success in this case sends a positive signal to the wider industry and to IP practitioners. The ruling of the court in favour of Tencent is a positive outcome for genuine rights owners and can be seen as a clear message from the courts that actions violating the principle of good faith will not be tolerated. Hopefully this message will be heard by those looking to abuse the system and will serve as a deterrent to individuals or companies looking to initiate litigation to obtain improper benefits.

ARTICLE TAGS
UK Intellectual Property Patent
POPULAR ARTICLES ON: Intellectual Property from UK
How Quickly Can A European Patent Be Granted?
Adamson Jones IP Ltd
If you are looking to obtain a European patent, there are a number of factors that affect the time it takes to be granted.
High Court Judgment Highlights Importance Of Professional Representation
J A Kemp LLP
The recent case of Reaux-Savonte v Comptroller-General of Patents ([2021] EWHC 78 (Ch)) concerns an appeal from a decision of the Comptroller General, dated 19 May 2020...
How To Get Your Patent Application Claims Ready For Europe?
Adamson Jones IP Ltd
One of the biggest issues faced by PCT patent applications entering Europe is the structure of the patent application claims.
How To Prove 'Passing Off'
Gowling WLG
'Passing off' does not have a statutory basis and doesn't need to be registered to be effective.
Distinctly Different? Trade Marks And The Standards For Distinctiveness
Gowling WLG
The growth of the online world has meant that many brands which previously would have been accessible by and promoted to a section of society are now available to the world.
A Taste Of... IP In The Food & Drink Industry
Marks & Clerk
Producers of food and drink can benefit from a wide array of intellectual property (IP) rights to protect their investment in developing and establishing distinctive brands, quality products as well
FREE News Alerts
Sign Up for our free News Alerts - All the latest articles on your chosen topics condensed into a free bi-weekly email.
Register For News Alerts
Article Tags
UK Intellectual Property Patent
Related Articles
Upgrades, People, Upgrades Haseltine Lake Kempner LLP
Review Of EPO Parameter Decisions In 2020 J A Kemp LLP
UKIPO Delivers On Its Promise To Owners Of EU Trade Marks And Registered Community Designs Ashfords LLP
High Court Judgment Highlights Importance Of Professional Representation J A Kemp LLP
Important Changes To Your EU Trademark And Design Rights From 1st January 2021 Acuity Law
Mondaq Webinars
International Arbitration and Cyprus
Patrikios Pavlou & Associates
Webinar Limassol Cyprus
International Transfer Pricing Trends from a Swiss Perspective - Practical Tips and Lessons Learned
Tax Partner AG
Webinar Zurich Switzerland
More Webinars
Comparative Guides
Anti-Corruption & Bribery
Banking Regulation
Blockchain
Cartels
Corporate Tax
Mondaq Advice Centres
UK
Coming to and Investing in the UK
Global
Trademarks in SAARC Countries
Global
Investment Immigration
More MACs
Upcoming Events
Claim Scope and Sufficiency: When Does a Broad Claim Fall for Insufficiency?
J A Kemp LLP
Webinar London UK
Patenting Antibody Pharmaceuticals At The EPO
J A Kemp LLP
Webinar London UK
Mondaq Social Media