Despite low growth levels in the global economy in general, and in Europe in particular, the number of patent applications directed to Electrical and Electronic subject matter received by the European Patent Office showed year on year growth in 2016.

The number of applications directed to Electrical and Electronic subject matter that the European Patent Office allowed to grant also increased in the same period.

The largest growth in filings among the top ten was in the technological field of "Electrical machinery, apparatus, energy", in which the number of filings increased by 5.1% relative to 2015. Next came "Transport" (3.6% increase) and "Computer technology" (2.9% increase). The only non-electrical technological field in the top ten to display an increase in filings, "Biotechnology", increased by 0.3% relative to 2015. 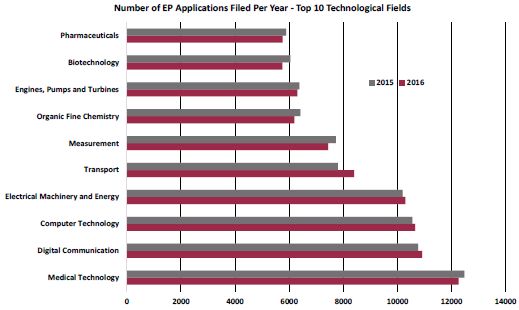 The areas of "Computer technology" and "Electrical machinery, apparatus, energy" were also third and fourth respectively in terms of the total number of applications filed, behind "Medical technology" and "Digital communication" (both of which showed slight reductions in filings relative to 2015).

ARTICLE TAGS
UK Intellectual Property Patent
POPULAR ARTICLES ON: Intellectual Property from European Union
Artificial Intelligence: Can A Machine Be An Inventor?
Keltie
Computers, and the functionality they provide, permeate every part of modern life.
Tarilian Laser Technologies – A Case Study In Due Diligence
HGF Ltd
When deciding whether to invest in a company, an investor will inevitably have to decide the value of the company.
EPO Launches Consultation On Grace Periods
J A Kemp LLP
The EPO has launched a user consultation into the desirability of introducing a "grace period" into the European patent system.
When Does A Disclosure Invalidate A Patent?
Albright IP
This brief article explains why and when a public disclosure invalidates a patent.
The European Unitary Patent And Unified Patent Court – January 2022 Update
Haseltine Lake Kempner LLP
After years of delay caused by legal challenges in Germany to ratification of the Agreement on a Unified Patent Court (also known as the "UPC Agreement" or "UPCA")...
By Design: Update On Registered Design Filing At The UK IPO
Haseltine Lake Kempner LLP
Following a referendum in the UK in 2016, the UK's official membership of the European Union ended in January 2020...
FREE News Alerts
Sign Up for our free News Alerts - All the latest articles on your chosen topics condensed into a free bi-weekly email.
Register For News Alerts
Article Tags
UK Intellectual Property Patent
Related Articles
Battle Of The Eagles: Trademark Infringement And ‘indirect' Confusion Novagraaf Group
The Danger Of Using Your Name As A Trade Mark Albright IP
When Does A Disclosure Invalidate A Patent? Albright IP
Artificial Intelligence: Can A Machine Be An Inventor? Keltie
Pharmaceutical Trade Marks - Top Tips Keltie
Mondaq Webinars
UK Construction Law Update: What happened in 2021? What can we expect in 2022?
Charles Russell Speechlys LLP
Webinar London UK
New Legislation Paves the Way for the Future of Aviation
HarleyJames Law
Webinar Nassau Bahamas
More Webinars
Comparative Guides
Anti-Corruption & Bribery
Artificial Intelligence
Banking Regulation
Blockchain
Cartels
More Guides
Mondaq Advice Centres
UK
Coming to and Investing in the UK
Global
Trademarks in SAARC Countries
More MACs