UK: Gender Diversity At The UPC

by Hsu M. Chung (London)
HGF Ltd
Your LinkedIn Connections
with the authors

In Europe, women remain grossly under-represented in research and innovation. A recent study by the European Patent Office (EPO) found that only 13.2% of inventors in Europe are women.

The Unified Patent Court (UPC) is a new Court that is being set up to decide in particular on the infringement and validity of both new Unitary Patents and classic European Patents; comprising judges from all participating Member States of the European Union.

The Unified Patent Court has now confirmed the appointment of a total of 85 judges (34 legally qualified judges and 51 technically qualified judges) to take up their duties as of the entry into force of the UPC Agreement. Looking at the composition of the UPC Judiciary, taking the published prefix of Mr and Ms for each Judge as a proxy for men and women we looked the relative proportions of appointments (see table 1). Women are set to make up slightly more than half (16 Mr : 18 Ms) of the Legally Qualified Judges.

However, this is not true for Technically Qualified Judges. 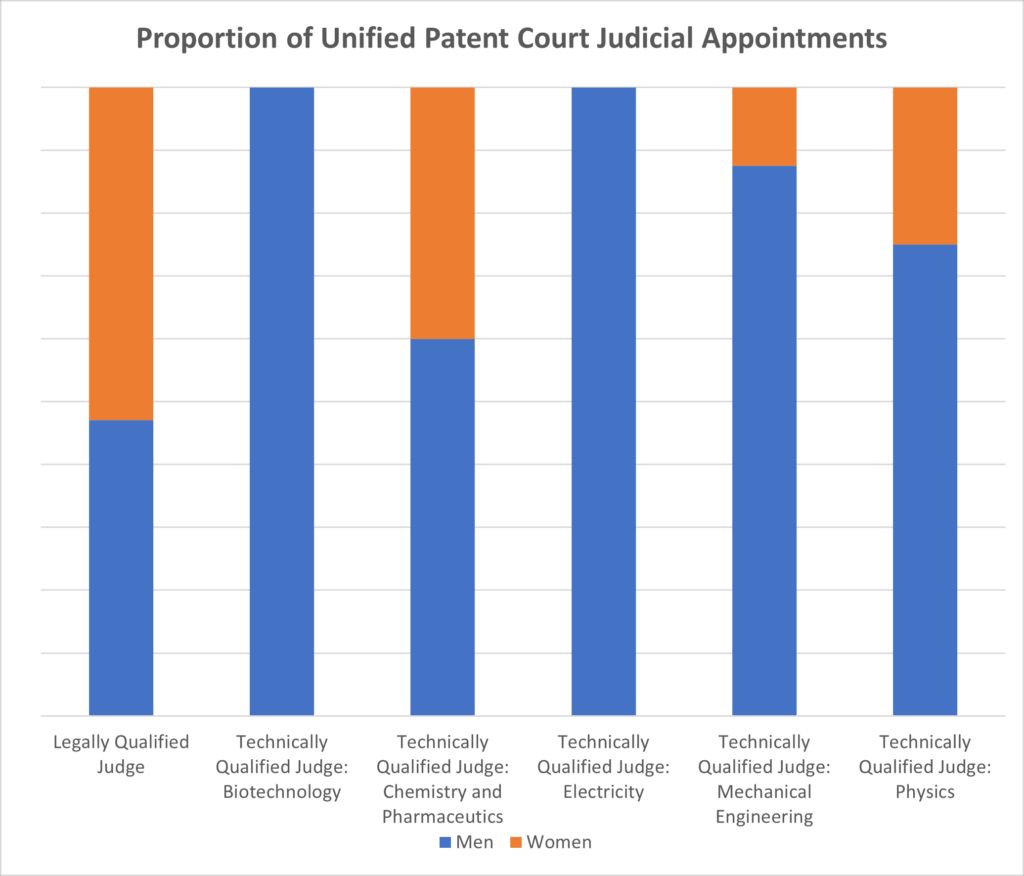 Women in Tech reports that:
Around 15% of engineering graduates are female, 38% for Maths, and 19% for Computer Studies. This gap in STEM education translates in the workplace to men dominating the industry with just 19% being women. Encouraging girls to study STEM subjects with the view of pursuing a career in tech is important not just for the campaign for gender equality in society, but also for the UK's competitiveness as technology pioneers. It has been estimated that by 2025, the UK will be 1.8 million short of engineers. Levelling the playing field and making a career in tech more appealing and exciting in the eyes of future generations is a way to prevent a skills shortage in the future of the UK tech industry.

Although we do not know what proportion of UPC judicial candidates were women, overall, in the UPC as in STEM, it would appear there is still some way to go for women in their technical fields to reach parity with men.

ARTICLE TAGS
UK Intellectual Property Patent
POPULAR ARTICLES ON: Intellectual Property from UK
What Is A Patent?
Keltie LLP
A patent is a time-limited monopoly awarded by countries as an incentive for investment in novel and non-obvious technical innovation. The purpose of the patent system is to allow companies...
More Drama For Combination SPCs
Potter Clarkson
The stage is set for another referral to the Court of Justice of the EU (CJEU) on the eligibility criteria for Supplementary Protection Certificates (SPCs) for "combination products"...
Gene Editing : CRISPR Breakthroughs Highlight IP Questions
Keltie LLP
There have been some exciting announcements about the application of CRISPR-Cas9 type gene-editing technology to treat serious illnesses in the past few weeks.
1. What Is An IP Driven Start-up?
Marks & Clerk
Few start-ups are established without the founders having an eye on a future exit, even if they hope to change the world along the way or as a final outcome of their efforts.
Patent Protection For Medical Devices – The Devil Is In The Details
HGF Ltd
It is well accepted that the development of new medical devices is very resource-intensive. It is, therefore, no surprise that companies apply for patent protection for new medical devices with the aim...
A Change To The Rule 71(3) Communication From The EPO
Marks & Clerk
A "prior national right" or "earlier national right" is a national patent or application which was filed before, but published after the effective filing date of an EP patent or application.
FREE News Alerts
Sign Up for our free News Alerts - All the latest articles on your chosen topics condensed into a free bi-weekly email.
Register For News Alerts
Article Tags
UK Intellectual Property Patent
Related Articles
Green Channel Puts A Rush On Wave And Tidal Energy Patents Marks & Clerk
Does Using ChatGPT Count As A Public Disclosure? Marks & Clerk
Apple's Parts Pairing Policy – What Does This Mean For The Third Party Repair Market And IP Infringement Laws Marks & Clerk
Post-registration Challenges At The UKIPO Potter Clarkson
Patent Law Update: Shortened Compliance Period For GB Divisionals? Marks & Clerk
Mondaq Webinars
Considering the Nigerian Start-Up Act & The Opportunities for Tech
Oake Legal
A Guide for Business and Investors – The Sleeping Giant; Why is Nigeria the New Emerging Market for Global Business
Threshing Fields Law Practice
More Webinars
Comparative Guides
Anti-Corruption & Bribery
Artificial Intelligence
Banking Regulation
Blockchain
Cartels
More Guides
Mondaq Advice Centres
UK
Coming to and Investing in the UK
Global
Trademarks in SAARC Countries
More MACs
Upcoming Events
Data Breaches: Dealing With The Long Tail
Lewis Silkin
Webinar London UK
ThinkHouse Spring Seminar 2023 - London
Gowling WLG
Seminar London UK
Mondaq Social Media