UK: IP Intros: What Is Priority And Why Is It Useful?

An invention must at least be new and inventive to be patentable. Filing a patent application before publicly disclosing an invention is essential, as a public disclosure of your own invention can mean the invention is not considered new by the patent office.

However, before filing and prosecuting a patent application, you may not actually know whether a granted patent will be beneficial given the fact that you have not had the opportunity to publicly disclose, discuss, or share the invention with potential investors, consumers, or licensees.

Moreover, as 'international' patents do not exist, you may wish to protect your invention in multiple countries by filing multiple national patent applications, a European patent application, and/or a PCT patent application. However, filing and prosecuting these applications can be expensive, meaning you may not want to initiate such application processes if you are unsure as to whether you want or need a granted patent.

In this scenario, you can file a first application in a country where the costs of filing patent applications are relatively low (such as a national application in the UK). Once filed, in the following 12-month priority period you can:

Once this first application is filed, you have 12 months to decide upon (and file) any national, European, or PCT applications relating to the same invention, bearing in mind that whilst these additional filings offer a wider geographical area of protection, they will incur higher costs. The 12-month period in which you can file these additional applications results from an applicant's 'right to priority'. 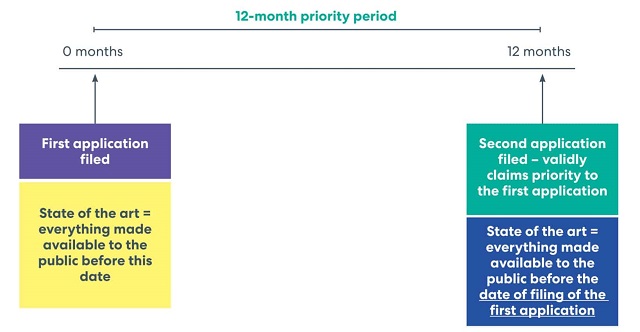 What is a 'right to priority'?

A valid declaration of priority sets a priority date for the second application. It is the priority date which is used when determining if the invention is new and inventive.

Essentially, a valid priority claim provides an earlier cut-off date for when a piece of prior art needs to have been disclosed to the public in order for it to be considered for assessing whether an invention is new and inventive.

Who can claim priority?

Where can the applications be filed?

A single application can therefore have multiple priority dates corresponding to different features of an invention, which in turn affects the state of the art for those features.

Why is claiming priority important?

ARTICLE TAGS
UK Intellectual Property Patent
POPULAR ARTICLES ON: Intellectual Property from UK
Art Contest Won By AI Generated Image
Marks & Clerk
Aritifical intelligence image generators such as DALL-E 2 and NightCafe have become synonymous with questions of copyright, and a growing fear that this generated art could replace the work of humans.
Same, Same But Different – Revocation At The EPO And UPC
J A Kemp LLP
The opposition procedure before the European Patent Office (EPO) has been a highly attractive forum for challenging patents since the first European patents were granted.
Diversity, Equity And Inclusion In IP Season 2 Episode 9 (Podcast)
Cipher
Episode 9 in Season 2 of the Cipher Vision Podcast series features Mike Binns and Braxton Davis, both Associate General Councel at Meta.
Proving The Use Of An EU Trade Mark In Brexit Britain
Rouse
The case concerned an application for revocation of an EU trade mark. The applicant for revocation claimed the EU trade mark had not been put in genuine use in the EU during the relevant period.
Foreign Video-Hosting Website Can't Escape Long Arm Of The Law
McDermott Will & Emery
Focusing on the first prong of the minimum contacts test (whether the foreign defendant purposefully directed its activities at the United States) the US Court of Appeals for the Ninth Circuit reversed a district court holding ...
Fashionably IP – Podcast Exploring Hot Topics In The World Of Fashion And Intellectual Property
HGF Ltd
We are delighted to launch our new Fashionably IP Podcast were we will be looking at important hot topics in the world of fashion and intellectual property.
FREE News Alerts
Sign Up for our free News Alerts - All the latest articles on your chosen topics condensed into a free bi-weekly email.
Register For News Alerts
Article Tags
UK Intellectual Property Patent
Similar Articles
Powered by mondaq AI
MATCH
77%
European Practice For Overseas Attorneys Dehns
76%
Priority Entitlement In Europe – Current Best Practice Following Board Of Appeal Decision T844/18 J A Kemp LLP
74%
A Simple Guide To Priority In The UK Finnegan, Henderson, Farabow, Garrett & Dunner, LLP
70%
Practical Tips For Avoiding The CRISPR Priority Pitfall In Europe Haseltine Lake Kempner LLP
69%
Referral To The EPO Enlarged Board On Partial Priority Barker Brettell LLP
Related Articles
The Art Of The Possible – UKIPO Publishes Its AI Patent Guidelines Boult Wade Tennant
European Software Patentability: Let's Get Physical Kilburn & Strode
As Autumn Leaves Fall, Creativity Blossoms In Oxfordshire Marks & Clerk
World Vegetarian Day: "Meat" The Future Of Food J A Kemp LLP
The Influencer Economy Marks & Clerk
Mondaq Webinars
Recent Global Private Capital Developments Seen from a Channel Islands Perspective
Mourant
Litigation Funding in Canada
Nomos Capital Corp.
More Webinars
Comparative Guides
Anti-Corruption & Bribery
Artificial Intelligence
Banking Regulation
Blockchain
Cartels
More Guides
Mondaq Advice Centres
UK
Coming to and Investing in the UK
Global
Trademarks in SAARC Countries
More MACs