UK: Haseltine Lake Kempner's Technical Boards Of Appeal Of The EPO Newsletter Is Out Now!

Technical Boards of Appeal of the EPO – Update

The Technical Boards of Appeal, which handle appeals from first instance decisions of the examination and opposition divisions of the EPO, received and settled a record number of appeals in 2019. 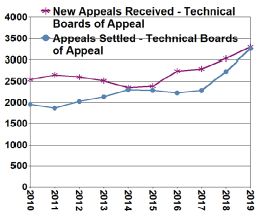 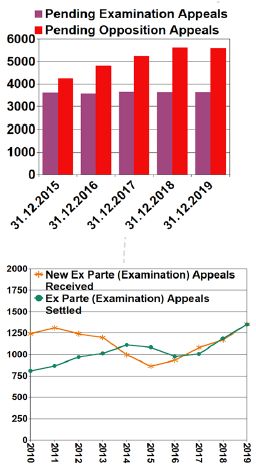 The increases in appeals filed since 2015 may be a reflection of (and in part reflected in) the increased numbers of European applications refused and European patents opposed.

Appeals may be settled by a decision on their merits or in other ways. For instance, they may fail as a result of a decision not on the merits of the appeal but on some more-or-less formal matter unrelated to the merits of the case (e.g. if the appellant was not entitled to appeal; payment of a reduced fee for appeal when the appellant was not entitled to a reduction; etc.). Appeals may also be settled without a decision, typically when appellants withdraw their appeals. This may happen after a Board of Appeal has issued a communication, perhaps with a preliminary opinion, on the merits of the appeal which is not positive. All appeals settled without decisions fail: the first instance decisions stand. 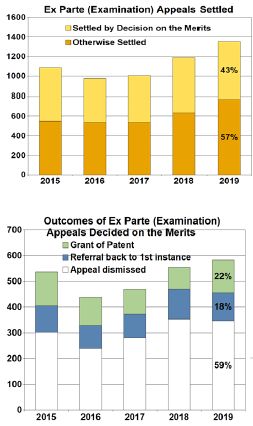 In recent times, only a minority of ex parte (examination) appeals have been settled by a decisions on the merits, which most often resulted in the appeals being dismissed, the first instance decisions standing unrevised. Some decisions were for referral back to the first instance: objections which brought about the appeals are overcome but other issues remain to be addressed and require "two- instance" consideration. Some decisions grant patents in one form or another, which may not be in the form initially sought.

In general, a majority of inter partes (opposition) appeals have been settled by decisions on the merits. The most likely outcome has been dismissal of the appeals, the first instance decisions standing unrevised. However, first instance outcomes have most often been revised, with the revised outcomes ranging from revocation of patents to maintenance of patents as granted, but also including less extreme revisions such as maintenance of patents in some newly amended form and outcomes in which the cases are referred back to the first instance (objections which brought about the appeals are overcome but other issues remain to be addressed and require "two-instance" consideration). Any revision could be seen as at least a partial success of the appeal for the appellant.

ARTICLE TAGS
UK Intellectual Property Patent
POPULAR ARTICLES ON: Intellectual Property from UK
UPC Could Open Its Doors In 2022
HGF Ltd
With news that the Austrian parliament has ratified the Protocol on the provisional application of the Agreement on a Unified Patent Court on 2 December 2020, the Unified Patent Court (UPC) opening in 2022 is becoming more likely.
Will The European Patent System Embrace Grace Periods?
Marks & Clerk
The European Patent Office is conducting a survey of European patent applicants, to assess the impact of the EPO's strict novelty requirement on applicants' disclosure and commercialisation strategies.
EPO Launches Consultation On Grace Periods
J A Kemp LLP
The EPO has launched a user consultation into the desirability of introducing a "grace period" into the European patent system.
Tarilian Laser Technologies – A Case Study In Due Diligence
HGF Ltd
When deciding whether to invest in a company, an investor will inevitably have to decide the value of the company.
EPO Board Of Appeal Finds "No Legal Basis" For Requirement To Adapt The Description To Conform To The Claims
J A Kemp LLP
Such amendments, whilst occasionally tedious, became an accepted part of practice at the EPO and had no noticeable impact on the scope of protection.
Start-Ups & IP, A Case Study: SleepCogni
HGF Ltd
Using SleepCogni as a case study, we look at some key ways that IP can help start-ups to develop their technology and secure investment. SleepCogni is a SleepTech start-up who have developed...
FREE News Alerts
Sign Up for our free News Alerts - All the latest articles on your chosen topics condensed into a free bi-weekly email.
Register For News Alerts
Article Tags
UK Intellectual Property Patent
Related Articles
When Does A Disclosure Invalidate A Patent? Albright IP
With News That The Austrian Parliament Has Ratified The Protocol On The Provisional Application Of The Agreement On A Unified HGF Ltd
A Review Of Railway Innovation Through Patenting Trends Marks & Clerk
E-Scooters - Manufacturers Continue To Invest Despite Rules Against Road-Use Marks & Clerk
Expanding Frontiers Of Intellectual Property Rights In Computer Games And Virtual Reality Marks & Clerk
Mondaq Webinars
Latest Updates in the Turkish M&A Landscape and Looking Ahead to 2022
Solak & Partners
Webinar Istanbul Turkey
Diverse Liquidity Options for Complex Cayman Islands Fund Structures
Travers Thorp Alberga
Webinar Grand Cayman Cayman Islands
More Webinars
Comparative Guides
Anti-Corruption & Bribery
Artificial Intelligence
Banking Regulation
Blockchain
Cartels
More Guides
Mondaq Advice Centres
UK
Coming to and Investing in the UK
Global
Trademarks in SAARC Countries
More MACs