UK: Close But No Cigar? What's Different About The T-4 Capacity Market Auction Results Of 2016?

by Adam Brown
Dentons
Your LinkedIn Connections
with the authors

They say a picture is worth a thousand words, so rather than writing a lengthy post on the results of the provisional four-year ahead GB Capacity Market Auction, published on 9 December 2016 by National Grid, we are focusing on two pictures and inviting you to spot the difference between them.

The first, immediately below, shows the progress of bidding in the 2016 auction.  In simple terms:

The big right to left moves occurred when the price moved between £35 and £30 and below £25.  In particular, each of these moves saw 6GW of capacity drop out. 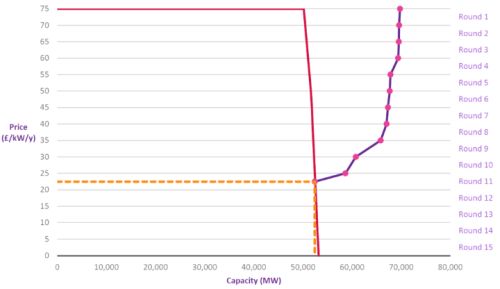 Now look at the equivalent presentation of results from last year's auction.  The purple line slopes more gradually, and the biggest right to left moves happen much earlier on in the bidding, between £60 and £50.  (The picture from 2014 is very similar to the 2015 one.) 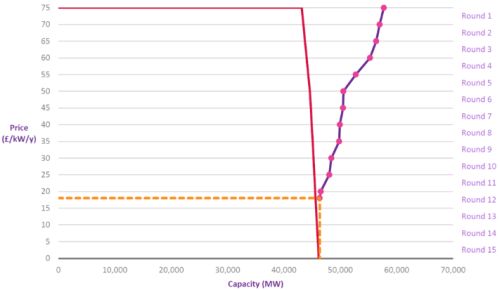 It's only an educated guess, of course, but it seems likely that much of the big leftward shifts in both auctions represented the exiting of bidders with plans to build large-scale proposed combined cycle gas turbine (CCGT) plants.  As a group, they are almost certain to have higher per MW development costs than other categories of new build projects competing for capacity agreements (small gas or diesel projects based on reciprocating engines, open-cycle gas projects, or battery based storage).  And the amount of capacity involved corresponds roughly with the big CCGT projects in the auction.

If the above is correct, why where proposed new big CCGT plants apparently prepared to tolerate prices almost 50% lower this year?  Perhaps they were hoping that a price between £30 and £35 would be where the auction cleared this time, on the basis that:

Maybe Ofgem's warning wasn't strong enough.  Maybe the smaller-scale generators reckon that Ofgem's bark will turn out to have been worse than its bite on this.  In any event, the outcome has shown that for now, simply expanding the amount of capacity to be procured under an auction, as the Government appeared to be hoping when it adopted a limited change of approach to the 2016 auction, isn't enough to ensure that some new GB CCGT plant is financeable and gets built.  Instead, a somewhat higher price will be paid to all successful bidders, including existing plant, for a larger amount of capacity than the Government thought we really needed.

As usual on these occasions, the Government has professed itself happy with the result of the auction, and it is fair to note that of the two new gas-fired plants with a capacity of around 300 MW that have been successful in the auction, one is described in the Capacity Market register as being CCGT.  But if a new generation of big CCGT plants is an important part of our new lower carbon power mix, there is some way to go.  A possibly more promising approach to using a capacity market to stimulate new CCGT build is suggested by the European Commission's recent Winter Package of Energy Union proposals: set a date beyond which existing coal-fired plant will be ineligible for capacity market payments.  This is not among the options canvassed in the Government's recent consultation on achieving the closure of coal-fired plant by 2025.  There would of course be an element of risk in adopting such an approach (coal plant might stay open because it can still make money without a subsidy, resulting in overcapacity, or alternatively coal plant might close immediately, before the new CCGT plant is built, leaving a generation gap), but it might be worth considering.