European Union: Five Things You Should Know About The EU's Draft AI Regulation

The European Commission published its draft AI Regulation on 21st April 2021. The proposals are far-reaching. The regulation won't form part of UK law, of course, but it does have extra-territorial effect and it will be influential. Here are five things you should know.

The draft regulation is 'risk-based': the greater the risk posed by an AI system, the stricter the rules. This is shown in Figure 1 (taken from the Commission's accompanying literature1). 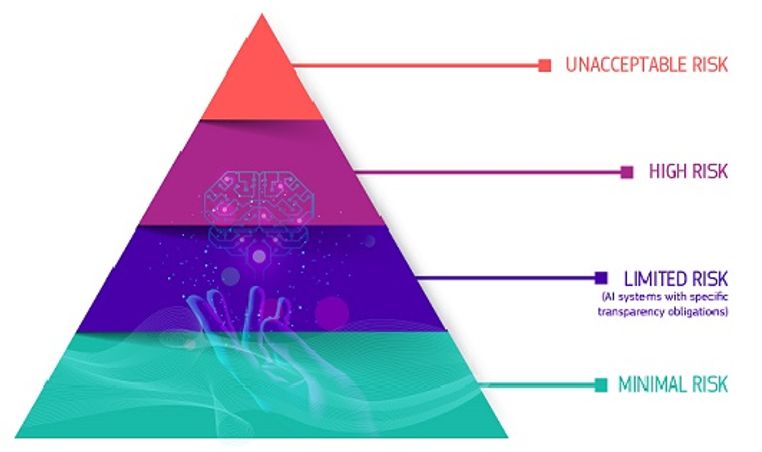 At the top of the pyramid is a limited category of AI practices which pose an 'unacceptable risk'. These are banned. At a high-level the banned categories are:

Significant fines are proposed. A company failing to comply with the ban could be punished with a fine of EUR 30m or 6% of worldwide annual turnover (whichever is higher).

Working down the pyramid, the draft regulation sets out strict rules for 'high risk' AI systems. There are two key questions here: First, when is an AI system 'high-risk'? Second, what rules will apply to 'high-risk' AI systems?

When is an AI system 'high risk'?

The first question is to establish when an AI system is 'high risk'. The draft regulation sets out two options:

What rules will apply to 'high risk' AI systems?

Extra rules apply to 'high-risk' AI systems. The key requirements are summarised below:

The extent of these requirements for 'high-risk' AI systems (and the breadth of the 'high-risk' category itself) will be hotly debated. Expect to see significant differences of opinion as to likely costs of compliance. A company failing to comply with these requirements could be punished with a fine of EUR 20m or 4% of worldwide annual turnover (whichever is higher).

To complete the picture, the draft regulation also envisages two lower-risk categories of AI systems: 'limited risk' and 'minimal risk' (see Figure 1). 'Limited risk' AI systems are subject to specific transparency requirements – e.g. an AI chatbot must disclose to a user that they are interacting with a machine. The draft regulation does not impose any obligations on 'minimal risk' AI systems, where existing legislation is deemed to be sufficient. The Commission is keen to point out that the "vast majority of AI systems currently in use in the EU fall into [the 'minimal risk' category]."

Again, the regulation won't form part of UK law. But it does have extra-territorial effect, like GDPR, and it will be influential:

One way or another, these rules will be important in the UK.

In addition to the 'risk-based' categorisation of AI practices and systems, the draft regulation devotes much time to creating an EU governance framework for AI. This includes provisions on regulatory sandboxes, national supervisory authorities in EU member states, and a new pan-European supervisory body: the European Artificial Intelligence Board ("EAIB").

The proposal is that the EAIB will be composed of senior representatives from each of the EU member states' national supervisory authorities and the European Data Protection Supervisor. It would be chaired by the Commission and tasked with ensuring the regulation is applied consistently across the EU.

In time, the EAIB is likely to become as significant to AI lawyers as the European Data Protection Board is to privacy lawyers. Its guidance on interpreting the rules, complex technical points and novel legal issues will become familiar territory to those practising in the area.

Despite the excitement, we are still at a very early stage. The draft regulation published by the Commission is – in procedural terms – a 'proposal'. Proposals formally kick off the EU's complex legislative process.

Up to three rounds of review and comment in the European Parliament and Council will now take place. Both bodies ultimately need to agree the text of the regulation. If/when this happens, it will be published in the EU's Official Journal and the regulation will enter into force.

Even then the draft regulation envisages a two-year implementation period between entry into force and most of the regulation's provisions taking effect – much like GDPR between 2016 and 2018. However a few governance-type provisions, including those establishing the EAIB and EU member states' national competent authorities, would take effect earlier.

To put all this into context, it took over six years for GDPR to progress from an equivalent stage to its May 2018 implementation. If the draft regulation follows a similar timeline, it would not come into force fully until late 2027. Clearly we are still some way off.

ARTICLE TAGS
UK Privacy Data Protection Technology New Technology Security
POPULAR ARTICLES ON: Technology from European Union
European Digital Compliance: Key Digital Regulation & Compliance Developments
Morrison & Foerster LLP
To help organisations stay on top of the main developments in European digital compliance, Morrison & Foerster's European Digital Regulatory Compliance team reports on some of the main topical developments in this area ...
EU Spotlight: Top 6 Issues All General Counsel Need To Know About Ransomware
Alston & Bird
Ransom demands from cyber-attacks show no signs of slowing down, and the costs—both from ransom payments and repairing the damage—are rising precipitously.
Giambrone & Partners' Strategy Wins Back Five Figure Sum Lost In A Financial Fraud/Cryptocurrency Case
Giambrone & Partners
Giambrone & Partners was delighted to obtain the restoration of our client's funds in the sum of £37,000 in a complex case involving a fraudulent investment broker and two cryptocurrency trading platforms.
Centre For Data, Ethics And Innovation Publishes Two-year Review
Wiggin
The CDEI has published a two-year review as the tenure of the first Chair and Board of the CDEI comes to an end.
Government Publishes Policy Paper On Digital Regulation: Driving Growth And Unlocking Innovation
Wiggin
The Plan for Digital Regulation sets out the Government's overall vision for governing digital technologies.
Blockchain And Its Role In The Fight Against Covid
Osborne Clarke
With the ability to provide a secure and reliable record of vaccine delivery, the technology is set to play a vital role in the fight against the pandemic – and finally start to live up to some of the earlier hype...
FREE News Alerts
Sign Up for our free News Alerts - All the latest articles on your chosen topics condensed into a free bi-weekly email.
Register For News Alerts
Article Tags
UK Privacy Data Protection Technology New Technology
Security
More Tags
Related Articles
Ransomware Is Old Hat: How To Protect Yourself Against The New Threats To Your Technology Hill Dickinson
European Commission Consults On Web Accessibility Directive (2016/2102/EU) Wiggin
Government Consults On Digital Identities And The Governing Body Which Will Oversee The Rules On Digital Identity Wiggin
Government Consults On A New Pro-competition Regime For Digital Markets Wiggin
Ofcom Publishes Latest Report From Its Emerging Technology Programme Wiggin
Mondaq Webinars
Merger Control in Africa in 2021 – Where To Go From Here?
ENSafrica
Webinar Cape Town South Africa
Reshaping Strategies for Wealth Management in the Post-Pandemic Economy
Wedlake Bell
Webinar London UK
More Webinars
Comparative Guides
Anti-Corruption & Bribery
Artificial Intelligence
Banking Regulation
Blockchain
Cartels
More Guides
Mondaq Advice Centres
UK
Coming to and Investing in the UK
Global
Trademarks in SAARC Countries
More MACs
Upcoming Events
Bristows Life Sciences Summit “Trust Me, I Am An Algorithm. Is AI The Future Of Healthcare?”
Bristows
Panel London UK
Mondaq Social Media