UK: Robert G Volterra Gives Guest Lecture At Jindal University On The Topic "How To Win Cases Before The International Court Of Justice In The 21st Century"

On 21 April 2021, Volterra Fietta partner Robert Volterra gave a guest virtual lecture at Jindal University, India.  The topic of his lecture was: "How to win cases before the International Court of Justice in the 21st Century".  The lecture was simultaneously broadcast by the university on YouTube and thus made available to a wider audience.  In addition to students and faculty members of Jindal University, attendees participated from across Asia, Africa, Europe and the Americas.

Robert shared with the audience insights into practicing before the International Court of Justice and vignettes from his involvement in many cases at the Court over the past three decades.  Robert disclosed that he and his team often manage ICJ cases with government officials without ever being "seen" by the Court.  The Court does not have a procedure to designate "counsel of record", as do most courts and tribunals, and so usually only has sight of the lawyers who show up for a hearing.  Robert shared with the audience the advantages that can at times obtained by not having the Court, the opposing party and sometimes even certain members of a client's own external team of legal advisers, aware of the details of the professional management of a case.

Robert pointed out that the Court's docket has increased significantly since the end of the Cold War and that, for the past few decades, almost all of the disputes before the ICJ have been fact and evidence-intensive.  This has transformed the ICJ in practice from being a court that had few cases before it (and those mostly constitutional-type cases concerning abstract issues of principle and theory) into being a court mostly of first instance, with cases dealing with complex factual disputes with sometimes many thousands of pieces of evidence.  As a result, the so-called International Court of Justice "bar" – the lawyers practicing regularly in cases before the Court – has been slowly evolving away from its historic model of law professors into a more modern grouping that includes professional international litigators at specialist practices in law firms.  In fact, as Robert pointed out, in cases before the ICJ over the past few decades in which one party had a legal team composed of law professors only and the other party had a legal team led by professional international litigators at a law firm, the party with the professional lawyers won over 85% of the time.

Robert took the opportunity of the lecture to discussed a number of specific procedures of the Court and, more importantly, how they are applied in practice.  He identified how the Court's procedures have evolved over the past quarter century and how ICJ procedures (or sometimes the lack of them) can be used for a party's advantage.  He also shared examples of how the Court has been open-minded and flexible about creating new procedures on an ad hoc basis, when its existing rules and procedures do not meet the needs of a given case. 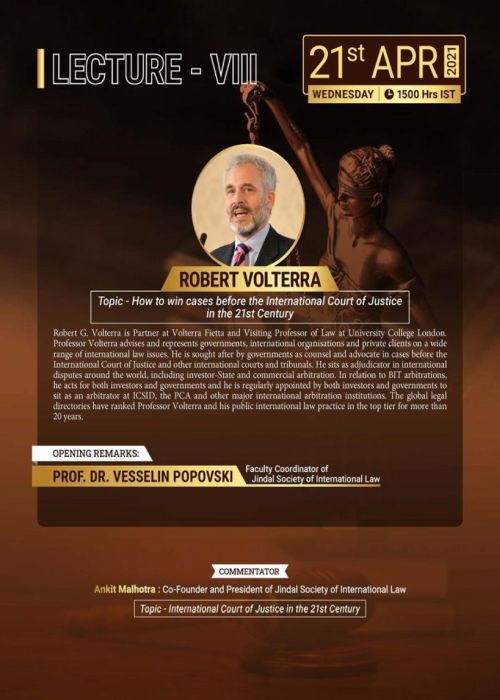