UK: Priorities And Trends In FCA Enforcement – Where Should Firms Direct Their Resources?

The Financial Conduct Authority (FCA) recently published its latest Enforcement Annual Performance Report, covering the reporting year ending 31 March 2019. Headlines on these reports often focus on the total value of the fines that are issued. However, those figures are often skewed by significant outliers; for example, this year the total value of fines issued against individuals (£80.2 million) included a fine of £76 million against Stewart Ford (CEO of Keydata). In this note, we assess a range of data from the current and earlier reports in order to understand the FCA's approach to enforcement and how it is changing over time. This will, in turn, help authorised firms (and their boards and senior managers) to decide where to focus their own compliance resources.

As with our similar note last year, we will look at the following questions:

The FCA's approach to enforcement has changed significantly in recent years, following findings in the Green report that it had previously placed too much emphasis, when deciding whether to investigate, on assessing the likelihood of ultimately winning disciplinary proceedings. In its recently published Approach to Enforcement, the FCA states that it will open an investigation in any case "where we suspect serious misconduct".

Although the FCA also states that it will "investigate efficiently and fairly", concerns in the industry that the current approach leads to resource stretch and delays in resolving investigations are arguably borne out by the data, which shows the number of open investigations increasing substantially but the number of fines issued remaining steady at a historically low level: 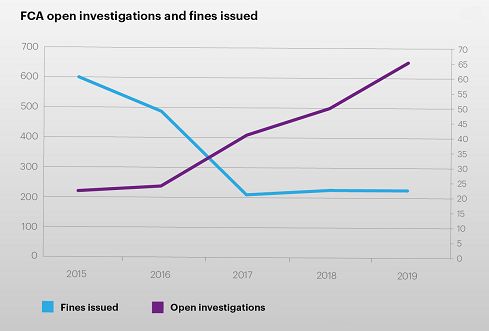 Number of open investigations at 31 March in each year, and the number of fines issued in each year ending 31 March.

Where is the FCA focusing its enforcement resources?

In its report, the FCA has broken down its open investigations by subject matter rather than by industry sector. The main areas of focus over the reporting period were: 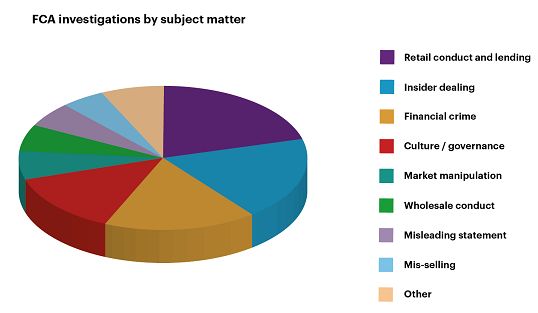 Subject matter of open investigations at 31 March 2018, exceluding unauthorised business.
"Other" is made up of client money / assets (14 investigations), listing and primary markets (12) and financial promotions (10).

In which areas is the FCA increasing or decreasing its levels of activity?

All main areas saw increased numbers of investigations, though the degree of increase and longer term trends vary according to the area: 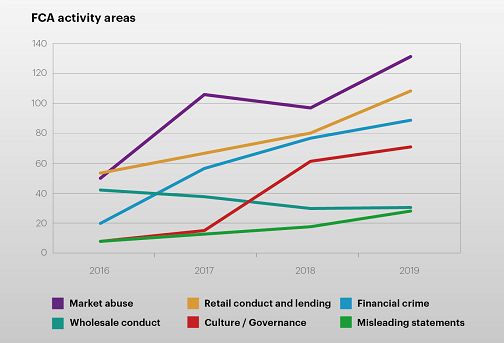 Number of open investigations for each of top 6 subjects matters (excluding unauthorised business) at 31 March in each year.

The data indicates that:

How long do enforcement investigations take, and what is their likely outcome?

The report outlines the average length of enforcement cases (from the start of an investigation through to its closure), broken down into various categories of outcome. For most types of civil and regulatory cases, the average length has reduced slightly since last year, though it is still relatively high compared to previous years: 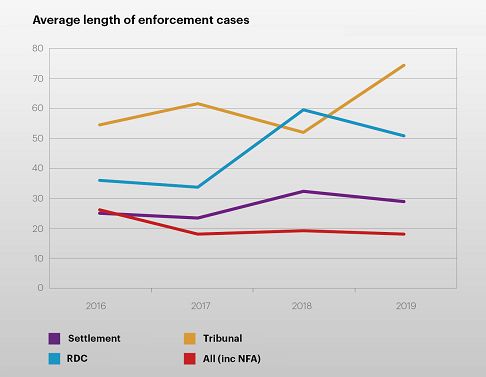 Average length of cases in months for each form of resulution at 31 March each year. "NFA" means "no further action".

The range of sanctions employed by the FCA in investigations resulting in a public outcome reduced in 2017/18. The breakdown is as follows: 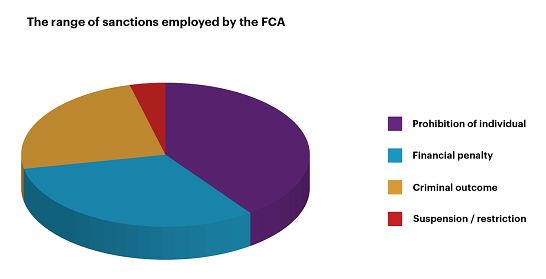 This reduction in the variety of sanctions used seems at odds with much of what the FCA has been saying publicly with regards to the tools it wishes to employ. In a recent speech, the FCA's Director of Enforcement and Market Oversight called for increased use of criminal sanctions for breaches of the Money Laundering Regulations. Similarly, the FCA's enforcement approach document makes it clear that the FCA will consider the full range of sanctions at its disposal when taking disciplinary action.

Interestingly, this is the first year in which the FCA's partly contested case procedure was used, but this is not mentioned in the report.

What other points of note are there in the FCA report?

There are a number of other interesting points in the FCA report, particularly where the FCA goes into detail on its priorities in various sectors. The key points we have identified include:

With thanks to Michael Calladine for his help in writing this article.