UK: Executive Director Salary Increases: To Align Or Not To Align?

That is the question. At least it is for remuneration committees considering their approach to executive director salary increases for next year. For many years, it has been established practice for executive director salary increases to align with the average increase for the company's broader employee population. This year, where increases for the employee population are expected to be higher than normal given ongoing inflationary pressures, we expect more companies to reconsider whether aligning executive director increases to this level remains appropriate, particularly in light of the latest updates to shareholder guidance which call into question the conventional approach. Our analysis of developments in market data, over the course of the year to date suggests that a trend towards a "discounted" approach is already emerging in this high inflation environment, where executive director increases are at a discount to the workforce average. The analysis also provides an insight into the level of discount we are seeing, suggesting that the higher the level of all-employee increase, the larger the discount for executives might be. While there is a logic for a discounted approach, it may not be right for all companies and careful consideration is required.

Established practice has been to align salary increases

For those of us who have been practising in the field for some time, we can well remember the days where annual salary increases for executive directors were consistently in excess of 5%, and therefore often significantly above the average level of increase within their broader employee population. In the wake of the financial crisis, shareholder scrutiny in this area increased and an expectation emerged that salary increases for executive directors should align to the employee average, or at least be no higher without an appropriate rationale. Since that time, it has become well established practice across the market that increases normally align to the average employee rate (with divergence typically only in certain circumstances).

Over the last ten years or so, the typical level of salary increase to employee populations has consistently been in the c.2-3% range (in the UK), reflecting a sustained period of low inflation and limited labour market pressures. In these circumstances, awarding executive directors a similar level is not unreasonable.

What if the all-employee increase is much higher than normal, as a result of the current inflationary environment - does this change the dynamic?

As an example, if the employee average increase is, say, 10%, should executive directors align with this and also receive a 10% increase? There is clearly an argument that the rationale for providing higher levels of increase to lower paid employees this year, necessary to help address current cost-of-living challenges which disproportionately impact these employees, is not as compelling for those on much higher incomes. As a stark example, a 10% increase for an employee on £30,000 may not provide sufficient incremental net income to cover the expected increase in average domestic fuel bills this year. For an executive on a salary of, say, £500,000, an incremental c.£25,000 net from a 10% increase would be expected to more than cover the increased domestic fuel costs for all but the most lavish of residences! And this value understates the incremental impact on likely total package value as a result of the "multiplier" effect through incentive participation.

Guidance updates released by a number of prominent UK institutions in recent weeks indicate an emerging preference for salary increases for executive directors to be lower than the average rate for the workforce: 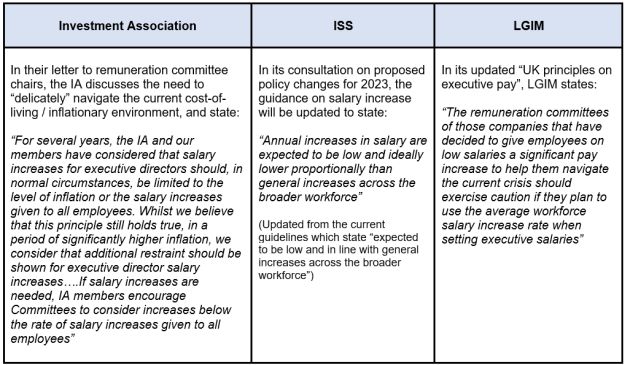 We believe that many companies have already recognised this issue and have already adopted a "discounted" approach for their executive directors this year (i.e. in the example above, executive directors would not receive 10%, but some lower percentage). Indeed, looking at the development of market data over the last year provides the initial evidence of this emerging trend.

The charts below illustrate the progression of market practice on salaries over the course of 2022. Data are shown for FTSE 350 companies (where the CEO received a salary increase). Practice has been grouped into three samples of companies with year-ends around December, March and June, to illustrate how practice has evolved over the year as expectations for inflation and cost-of-living pressures have become more acute.

In the December 2021 year-end sample, where salary increases would have been agreed around the start of 2022 when inflation (UK CPI) was running at around 5%, the median CEO increase was aligned to the median employee increase (both 3%), reflecting that a substantial portion of the market was retaining an aligned approach, in line with common practice in previous years. For the March 2022 year-ends, by which time UK inflation had risen to c.7%, the median employee increase was 4% but the median CEO increase had begun to lag this (at 3.3%), reflecting an increase in the proportion of the market adopting a discounted approach. By the time of the June year-ends, UK inflation had reached c.10%, feeding through into a further increase to the median all-employee rate (5%), and a further divergence to the median CEO rate (4%) with over half of this sample now adopting a discounted approach. 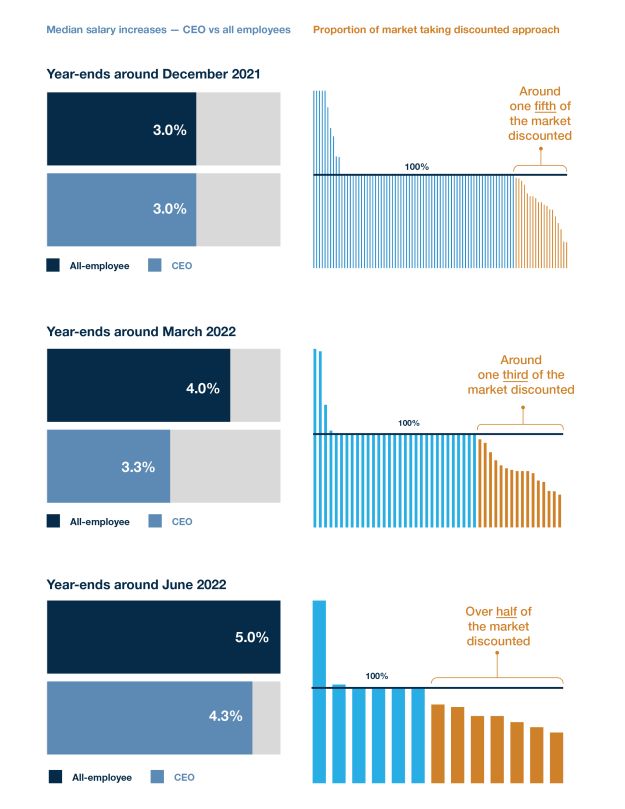 The sample above for companies with a year-end around June 2022 provides the latest snapshot of practice in the UK market, from the most recent disclosures. While it can be seen that this is a relatively small sample, it would not be surprising for practice in the September year-end sample to follow a broadly similar pattern, or indeed potentially see a further acceleration in the proportion of companies using a discounted approach, particularly now in the additional context of the latest shareholder perspectives outlined above.

We believe that this trend is not simply reflective of a discount being applied to just the CEO (or executive director) roles, but in some cases representative of a "graded" approach to salary increases throughout the wider organisation. As an indicative example, where the overall salary budget "pot" is, say, 7%, this might break down as >10% for the lowest-paid employees, 5-7% for middle management roles, and then lower increases (<5%) for senior management / executive roles. In addition, a number of companies have implemented further one-off cost-of-living support payments, either to all employees or to those below a threshold level of income or seniority.

For those companies about to enter their year-end cycle, there is much to think about. While a discounted approach may make sense, it is a complex area to think through. For example:

The charts below illustrate the level of discount for the CEO relative to the all-employee rate applied for all companies that have adopted a discounted approach in the samples shown above (i.e. as a reminder, where the CEO increase was 3% and the all-employee increase was 6%, the value shown would be 50% and each bar represents one company). 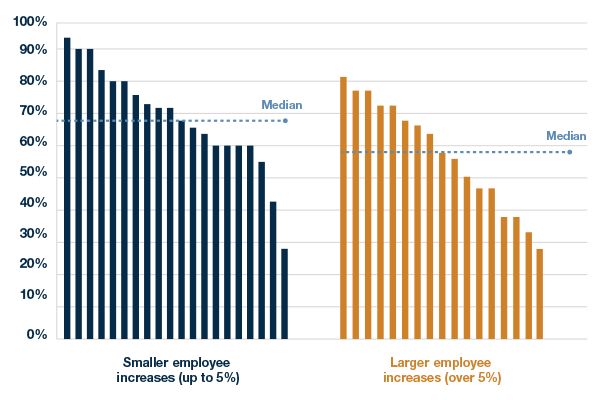 ARTICLE TAGS
UK Corporate/Commercial Law Corporate and Company Law Directors and Officers Executive Remuneration Shareholders Employment and HR Employee Benefits & Compensation
POPULAR ARTICLES ON: Corporate/Commercial Law from UK
Liability Limitation Clauses – A Sharp Lesson
Shepherd and Wedderburn LLP
The Inner House provides a sharp lesson in Benkert UK Ltd v Paint Dispensing Ltd and demonstrates that; where one party is found liable for causing damage, it does not necessarily follow...
Have You Considered A Family Investment Company?
Birketts
A FIC is an investment vehicle with the main benefit being the ability to pass on wealth to the next generation whilst retaining some control.
A Balancing Act – When Do Directors Owe A Duty To Creditors?
Forsters
On 5 October 2022, the Supreme Court handed down its long-awaited judgment in the case of BTI v Sequana. The decision, described as "momentous" for company law...
UK Corporate Transparency - Sweeping Changes On The Horizon
Proskauer Rose LLP
In February 2022, the UK Government published the Corporate Transparency and Register Reform White Paper (the "White Paper"), which set out its plans to reform Companies House and increase the transparency of UK corporate structures.
An Introduction To ESG And Your Organisation
Herrington Carmichael
In 2023, organisations are increasingly devoting resources to their environmental, social and governance (ESG) strategies so that they can make a positive impact...
Register Of Overseas Entities – Updated Guidance And Transition Period Coming To An End
Herbert Smith Freehills
The Department for Business, Energy and Industrial Strategy has published updated guidance for the registration and verification of information on the register of overseas entities...
FREE News Alerts
Sign Up for our free News Alerts - All the latest articles on your chosen topics condensed into a free bi-weekly email.
Register For News Alerts
Article Tags
UK Corporate/Commercial Law Corporate and Company Law Directors and Officers Executive Remuneration
Shareholders Employment and HR Employee Benefits & Compensation
More Tags
Related Articles
Stick Or Twist? Marks & Clerk
Why Is Warranty And Indemnity Insurance Important For M&A Transactions? Birketts
Mending Mistakes: Charges, The Land Registry & Companies House Gatehouse Chambers
Navigating Distressed M&A Norton Rose Fulbright
Bridging The Valuation Gap In Times Of Uncertainty Norton Rose Fulbright
Mondaq Webinars
Considering the Nigerian Start-Up Act & The Opportunities for Tech
Oake Legal
A Guide for Business and Investors – The Sleeping Giant; Why is Nigeria the New Emerging Market for Global Business
Threshing Fields Law Practice
More Webinars
Comparative Guides
Anti-Corruption & Bribery
Artificial Intelligence
Banking Regulation
Blockchain
Cartels
More Guides
Mondaq Advice Centres
UK
Coming to and Investing in the UK
Global
Trademarks in SAARC Countries
More MACs
Curated Content
Introduction Of Registry Of Overseas Entities Owning UK Real Estate
Verfides
Upcoming Events
Exits Via Settlement Agreement - Are You Getting It Right?
Gowling WLG
Webinar London UK
Reshaping Your Workforce
Lewis Silkin
Webinar London UK
Mondaq Social Media