In July 2013, Employment Tribunal fees were introduced and Claimant's would have to pay fees of up to £1,200 depending on the type of claim they were bringing. The rational for the introduction of the fee regime was to transfer the cost burden of Employment Tribunals to its users, deter unmeritous claims and encourage early settlements.

It was anticipated the fee regime would result in an 8% reduction in cases. However, statistics demonstrated a 66-70% reduction. 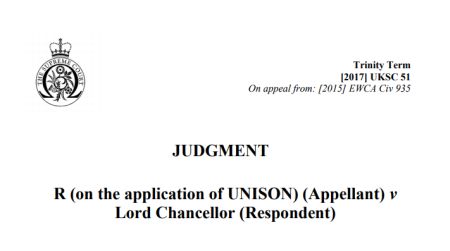 The Supreme Court decided the Employment Appeal Tribunals Fees Order 2013 (the Fees Order), which implemented the Government's Employment Tribunal Fee Regime was unlawful and must be quashed.

In short, the Supreme Court found the Fees Order:

Examine any claims that have been made against your company since 2013.

If you were ordered to pay compensation to reimburse the Claimant's Tribunal fees, then it is likely your company can recover this award. We wait for further guidance on how this will work in practice but employers should ensure that it has an accurate record of the sums it can expect to receive.

As the statistics demonstrate, the fees have been a significant deterrent for employees bringing claims. This is particularly so in relation to lower value claims or claims where compensation cannot be obtained, for example, when obtaining a declaration that an employee is a permanent employee. Employees without legal representation, can have their dispute reviewed by a Judge at no cost and little risk. Accordingly, increased litigation is likely and the company's budgets on legal expenses or HR support may need to be re-examined.

Modify your attitude to settlement discussions.

Remember, settlement discussions can take place at any time. It is predicted that that pre-action settlement resolutions through ACAS early conciliation may be more difficult to achieve. We expect to see successful resolution of disputes before a Tribunal proceedings are filed to decrease. Employees will be less discouraged to submit a claim in the Employment Tribunal. Indeed, it may be used as a tactic to put the employer under time limit pressures. Whilst this may appear to be a negative, it can have advantages. Often, it is not until the claim form is received that the basis of an employee's complaint becomes clear.

If you see an increase in the number of claims you are receiving, you can explain to the board or management that this fundamental change may be a key reason why.

ARTICLE TAGS
UK Employment and HR Employment Litigation/ Tribunals
POPULAR ARTICLES ON: Employment and HR from UK
Can I Monitor My Employees And Workers?
Herrington Carmichael
The data protection laws in the UK are currently governed by the Data Protection Act 2018 (DPA 2018) and the UK General Data Protection Regulation (UK GDPR).
The Future Of Flexible Working — What Do Employers Need To Know?
Weightmans
The Government has recently issued its response to a consultation which contained proposals to reform flexible working regulations. In its response, the Government has committed...
Royally Blowing The Whistle: Lessons To Be Learnt For Whistleblowers In The Workplace
Withers LLP
As a Brit married to an American and being dual qualified in England and New York, I speak daily with friends, family and clients on each side of the Atlantic. It is fair to say that Harry and Meghan - and events of late - quickly divide opinion.
‘Without Prejudice' Protection May Apply To Exit Discussions In Response To A Grievance
Herbert Smith Freehills
The EAT ruling in Garrod v Riverstone Management Ltd provides welcome reassurance that an employer can initiate ‘without prejudice' discussions offering a ...
Discrimination On Grounds Of Marital Status
Birketts
The Employment Appeal Tribunal (EAT) has considered whether the dismissal of a company director amounted to discrimination due to her marital status (Ellis v Bacon and another [2022] EAT 188).
Ethics, Risk And Compliance Roles In The U.K. – Part 2
WhistleB
We were delighted to interview Kevin Parle – Fellow of the International Compliance Association (ICA) and Deputy Chair of the Data Protection Forum – for insights and observations of whistleblowing roles...
FREE News Alerts
Sign Up for our free News Alerts - All the latest articles on your chosen topics condensed into a free bi-weekly email.
Register For News Alerts
Article Tags
UK Employment and HR Employment Litigation/ Tribunals
Similar Articles
Powered by mondaq AI
MATCH
81%
Employment Tribunal Fees Are Unlawful: What Happens Next? Shepherd and Wedderburn LLP
75%
Employment Tribunal Fees Are Unlawful And Will Have To Be Repaid By The Government Withers LLP
74%
Supreme Court Quashes Employment Tribunal Fees Clyde & Co
74%
Supreme Court Rules Tribunal Fees Are Unlawful DAC Beachcroft LLP
73%
Tribunal Fees Illegal And Prevent Access To Justice Says Supreme Court TLT Solicitors
Related Articles
World Cancer Day: How Employers Can Reduce Stigma And Support Colleagues With Cancer Lewis Silkin
How Can Employers Make Their Workplaces Appeal To Older Workers? Lewis Silkin
Generative AI In The Workplace: Time For A Cyber-Supervisor? Lewis Silkin
8 Drivers Of Change – Technology lus Laboris
8 Drivers Of Change – Social Trends lus Laboris
Mondaq Webinars
Considering the Nigerian Start-Up Act & The Opportunities for Tech
Oake Legal
A Guide for Business and Investors – The Sleeping Giant; Why is Nigeria the New Emerging Market for Global Business
Threshing Fields Law Practice
More Webinars
Comparative Guides
Anti-Corruption & Bribery
Artificial Intelligence
Banking Regulation
Blockchain
Cartels
More Guides
Mondaq Advice Centres
UK
Coming to and Investing in the UK
Global
Trademarks in SAARC Countries
More MACs
Upcoming Events
Reshaping Your Workforce
Lewis Silkin
Webinar London UK
Virtual Employment Law Academy 6, 7, 13, 14 March 2023
Lewis Silkin
Webinar London UK
Mondaq Social Media