by Leo Civelli , Paola Ricciardi , James Bauer and John Slade
Duff and Phelps
Your LinkedIn Connections
with the authors

The closing months of 2018 and the early months of this year have seen a sharp slowdown in economic activity in the world, particularly marked in Europe and in East Asia. This exceeded expectations and has strengthened fears of a coming recession. Yet, as was argued in the last quarterly note, these fears still seem excessive and while growth forecasts have been downgraded for 2019, a recession will hopefully be avoided both this year and next. After all, some of the clouds that darkened the financial picture last year, particularly for emerging markets, have lifted (e.g. dollar strength, higher U.S. interest rates, fears of inflation surging). And some of the Eurozone's weakness was generated by temporary effects (e.g. gilets jaunes demonstrations in France, new car emission tests or adverse weather conditions in Germany).

The danger of recession is clearly least present in the world's two largest economies. Both the U.S. and China are still growing and are expected to continue to do so. America is slowing down, but the labor market remains robust and forward looking confidence indicators do not point to a future crisis. In addition, the Federal Reserve has announced that it will refrain from further interest rate increases over the foreseeable future (indeed, hints have been dropped that rates might even be cut). As for the inversion of the yield curve (with long-term interest rates now below short-term ones), a feature often considered as a harbinger of recession, this may well reflect changes in the longer-term inflationary outlook rather than fears of a slump. Price pressures have remained very subdued for some time now, and not only in the U.S. Market participants may thus have incorporated the expectation of a structural downward shift in future inflation into their pricing of longer-term bonds.

Policy is also being relaxed in China on both the monetary and the fiscal front. The authorities have accepted that some moderate slowdown is inevitable, but will do their best to prevent year-on-year growth falling below 6 per cent. While this is a far cry from the 10 per cent growth rates that China could boast of until recently, it should be borne in mind that the absolute boost to the economy in dollar (or renminbi) terms of a 6 per cent growth rate today is of a similar order of magnitude to that of a 10 per cent growth rate in, say, 2010 or 2011. Import demand for commodities may well continue to slow down, but demand for consumer goods should remain healthy. A return to somewhat faster growth in China is likely, in turn, to strengthen the outlook in the developing countries of East and Southeast Asia. As for Japan, modest growth should continue this year, even if expansion in 2020 could be threatened by the imposition of a higher consumption tax.

Europe remains the weakest link. At the time of writing, there is still great uncertainty on the outlook for the United Kingdom. The forecast shown below assumes that Brexit will take place on amicable terms and that no significant barriers to trade will be erected on the two sides of the Channel (or in Ireland). A so-called "hard" Brexit, however, would have significant negative effects on British activity. It would also hurt Ireland and, if to a much lesser extent, several other EU economies.

On the European Continent, forward looking indicators for the manufacturing sector have been very depressed, particularly so in Germany and Italy. This is, however, not the case for similar indicators for the service sector, suggesting that the major reason for weakness lies in external demand. Export prospects should gradually improve as the Turkish and Argentinian slumps give way to some recovery in activity, as Brazil's and Russia's lacklustre recent performance improves and as China's reflationary measures raise the country's import demand. The main danger comes from Trump's protectionist tendencies. He has defined himself as "I am a Tariff Man" (4.12.2018) and his urge to tweet his "achievements" might tempt him to put into practice his oft-mentioned threat of a 25 per cent tariff on U.S. imports of cars and automotive equipment (ostensibly for reasons of national security). The direct effect of such a measure will obviously be negative, but need not be overwhelming. Simulations made by Oxford Economics suggest that it would reduce Euro Zone growth by not much more than 0.2 per cent of GDP in 2020. Indirect confidence effects, however, could worsen this picture.

Domestic trends, so far at least, have remained relatively robust. The labor market, in particular, is still performing well, with unemployment declining in a number of countries. Nominal wage growth is also relatively rapid, without this spilling over into inflation. Real wages, therefore, are expanding at a healthy pace and so is retail spending. In addition, policy is very accommodating. The latest signals from the European Central Bank (ECB) suggest that negative short-term interest rates will prevail through 2019-20. And fiscal policy is also moderately expansionary almost everywhere in Europe.

The danger, of course, is that unfavorable developments on the external front could spill over into domestic trends leading both households and corporations into more prudent behavior. A simultaneous slowdown in both external and internal demand could then usher in, if not a fully-blown recession, at least a period of stagnation. Policy would, almost certainly, be unable to counter this in an effective way. The ECB is highly unlikely to cut interest rates into further negative territory and a resumption of its Quantitative Easing program may well hit diminishing returns. On the fiscal front a return to austerity is out of the question, but there are clear limits to any further expansionary moves. In some countries this is because of the size of public debt; in others, particularly Germany, it reflects policy preferences for budget surpluses.

Spain and Ireland remain the strongest performers in the Eurozone, spurred by reductions in private debt and by structural reforms. Germany and France are likely to record modest growth, broadly in line with their potential. Italy may well stagnate this year and only grow marginally in 2020. Political uncertainties have weighed on activity, bank lending to the corporate sector is declining, partly reflecting the high burden of non-performing loans, and confidence indicators have plunged. Given very low, or even non-existent, growth and the likelihood of rising public debt, future turbulence on financial markets cannot be ruled out. 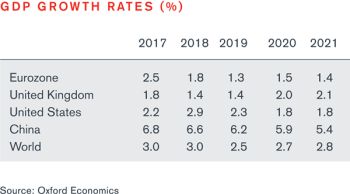