When facing bankruptcy or insolvency, companies have the option of going into voluntary administration. This is when an independent and qualified person (a voluntary administrator) takes over a company's assets and business operations in an attempt to salvage the company 1.

While no company wants to find itself in a state of voluntary administration, it is a stark reality faced by the Australian-based fund manager Blue Sky Alternative Investments Limited. The company is currently undergoing administration, following years of challenging circumstances starting as early as 2017. The future of a company that was once named one of Brisbane's top companies is now uncertain 2 after US-based short-seller Glaucus reported that the company had overstated its valuation and disregarded some of its key business obligations 3.

Despite Blue Sky's former Chief Executive Officer Robert Shand's claims that the company had grown by 50 per cent across key performance metrics, Glaucus expressed skepticism regarding the credibility of Blue Sky's valuations 4. The research company's analysis showed that Blue Sky's real fee earning asset under management was valued at maximum AUD 1.5 billion, which was 63 per cent short of the AUD 3.9 billion that Blue Sky had reported 5. The inflated representation of figures may have helped with boosting share prices and more access to capital. Blue Sky was also criticized for allegedly overcharging its clients with inflated management fees.

Shortly after the release of the Glaucus report, Blue Sky suspended its trading to review the claims of the short-seller hedge fund 6. Just one week later, the company's share prices dropped by 41 per cent by April 5, 2018 7. Despite its free falling share prices, Blue Sky's response in the face of such accusations was to call on the Australian Investments and Securities Commission (ASIC) to investigate and question the integrity of Glaucus rather than to refute the latter's claims with evidence, fostering even more pessimistic investor sentiments.

Even in the midst of battling to keep themselves afloat and avoiding more trade suspensions, Blue Sky nonetheless remained optimistic. This was until September 2018, when it confirmed that a US-based investment firm, Oaktree Capital, would be providing the Australian company with a seven-year-loan facility of AUD 50 million to facilitate the recovery of the company 8. However, not long after the loan agreement, Blue Sky announced it will fail to meet its obligations to Oaktree 9, breaching its financial covenant as it reported an after tax net loss of AUD 25.7 million for the first half of 2019. Blue Sky Alternative Access Fund, Blue Sky Alternative Investment's fund management subsidiary, also decided to withdraw from its parent company until ongoing legal actions were concluded 10.

After many failed deals and breaches of financial obligations, Blue Sky was suspended from the ASX 300 on May 2019. The company has also announced that the advisory and investment firm, KordaMentha, has been selected as its receiver and manager, and is currently still in administration 11.

Not only did Blue Sky fail to display transparency during the short-seller report, but it also failed to comply with the 3rd edition of the ASX's Corporate Governance Principles and Recommendations, where a listed entity must maintain a majority of independent directors in their board 12. In early 2017, John Kain, who served as the Chairman of Blue Sky, was the only independent member of the board, the other six being Executive Directors. This pushed Blue Sky to appoint two more independent directors in February 2017 but still failed to compose a board with an independent majority board of directors 13. The Australian Institute of Company Directors states that Non-Executive Directors provide independence and objectivity to the board. An objective and outside perspective supports the idea of acting in the best interest of the company and monitoring the Chief Executive Officer and senior executives without partiality 14. Independent directors also act as expert advisors in areas where the company aims to grow and develop 15. 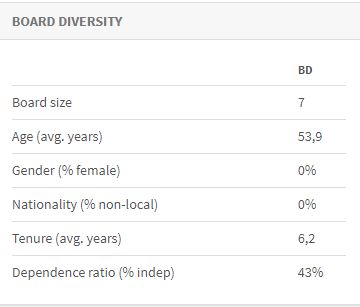 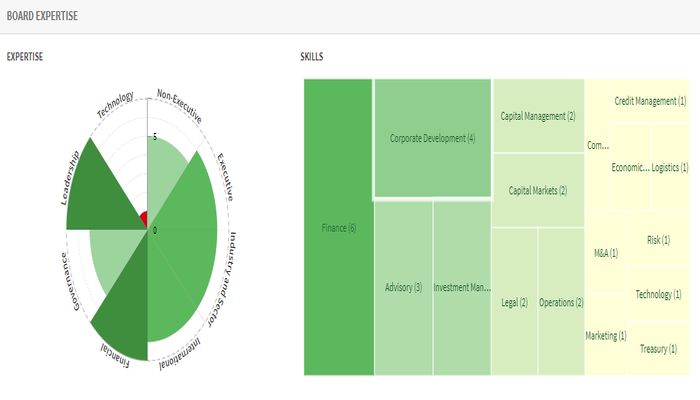 The board expertise tool of CGLytics that provides insight of the board skills matrix shows that the company lacked an expertise in risk. Although Blue Sky's Board is strong in the finance expertise due to its company sector, independent directors experienced in risk management could facilitate in monitoring and assuring the reliability of the financial information provided by the company. However, both independent members and risk expertise were lacking.

There was also a high turnover of board members and senior executives during the whole debacle. The first to depart the company in 2016 was founder Mark Sowerby. This raised concerns due to his sale of approximately AUD 27 million worth of company shares and may have started the downfall and speculation of Blue Sky's future 17. In April 2018, Robert Shand, the supposed optimistic managing director of Blue Sky has also stepped down from the board 18. Moreover, the company had to appoint three different Chief Financial Officers in a span of seven months 19. Mr. Joel Cann was appointed as Chief Executive Officer as he had extensive experience in rebuilding Aspen, where he was also appointed as CEO in 2016 20. After just two months, Blue Sky announces that it no longer required a CEO, forcing Joel Cann to depart the board 21. The high rate of departures could have led to an inefficiency in productivity 22. A recent analysis performed by CGLytics on executive departures from S&P 500 companies reveals that having more than one executive resignation in a year may cause the company's Total Shareholder Return to decline 23. 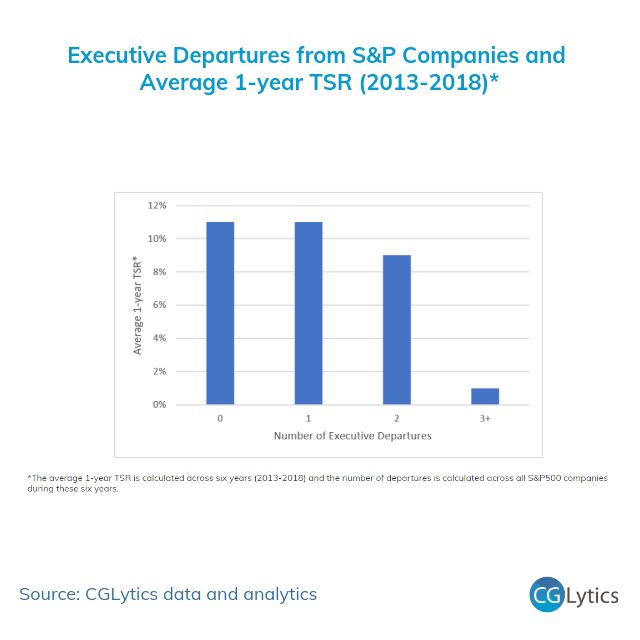 A significant number of departures may potentially lead to a lack of confidence for the future and can slow down the growth of shareholder investments.

Although no one would have expected the drastic plunge of Blue Sky, it could have been minimized or mitigated with good governance practices and decisions throughout the volatile season of the company. Appointing competent and independent directors that have the right skills to oversee executive management can effectively and ultimately add value to the company and avoid risks of uncertainty in businesses.

ARTICLE TAGS
UK Corporate/Commercial Law Corporate and Company Law Directors and Officers Insolvency/Bankruptcy/Re-structuring Insolvency/Bankruptcy
POPULAR ARTICLES ON: Corporate/Commercial Law from UK
The Register Of Offshore Entities: UK Properties Held In Offshore Structures - What You Need To Know
Weightmans
Big changes for those outside the UK, looking to to buy, sell or transfer property or land in the UK.
Time To Terminate? How To Mitigate Risk
Cooley LLP
The route that is chosen may have an impact on the damages that can subsequently be claimed.
Claim Right To Be Struck Out On The Principle That Reflective Loss Cannot Be Recovered (Burnford And Ors v Automobile Association Developments Limited)
Gatehouse Chambers
The Court of Appeal has upheld the decision of HHJ Paul Matthews striking out a claim on the basis that the loss claimed was reflective loss which could not be recovered.
High Court Considers Contractual Construction Of Irrevocable Letter Of Credit Incorporating UCP 600
Herbert Smith Freehills
In the context of a trade finance dispute, the High Court has considered the contractual interpretation of an irrevocable letter of credit incorporating the commonly used code in the Uniform Customs...
EU Corporate Sustainability Reporting Directive – New Sustainability Disclosure Obligations For EU And Non-EU Companies
Mayer Brown
On 10 November 2022, the EU Parliament adopted the Corporate Sustainability Reporting Directive ("CSRD"). The EU Council is expected to adopt the CSRD on 28 November 2022...
Improving Supply Contract Management
Weightmans
As the global trading landscape continues to experience disruptions, goods and services shortages, jurisdictional legal differences, increased regulation and heightened industry and consumer...
FREE News Alerts
Sign Up for our free News Alerts - All the latest articles on your chosen topics condensed into a free bi-weekly email.
Register For News Alerts
Article Tags
UK Corporate/Commercial Law Corporate and Company Law Directors and Officers Insolvency/Bankruptcy/Re-structuring
Insolvency/Bankruptcy
More Tags
Similar Articles
Powered by mondaq AI
MATCH
47%
The Three Billion - Enterprise Crowdsourcing And The Growing Fragmentation Of Work Deloitte
43%
Golden Boost At Nairobi Stock Exchange: Barclays Africa To List NewGold ETF Songhai Advisory LLP
43%
Interlocking Directorates: Looking For Signs Of Collusion, Conflict Of Interest And Overboarding CGLytics
43%
Directors Of A Company And Their Duties Nazali
42%
Questioning The Role Of The Executive Director ICSA
Related Articles
Unfair Prejudice In Shareholder Disputes Giambrone & Partners
Sole Director Companies – Be Careful As You Go It Alone Weightmans
7 Steps To Develop & Implement A Strong ESG Strategy Vendigital
Court Of Appeal Confirms Reflective Loss Rule Will Bar Claims Of Former Shareholders Of A Dissolved Company Because The Principle Must Be Determined At Time Of Alleged Loss Herbert Smith Freehills
Court Of Appeal Guidance On Good Faith Obligations In Shareholders' Agreements Cooley LLP
Mondaq Webinars
Modern Product Liability: Adapting to the Changing Risks for Product Manufacturers in the US and Europe
Cooley LLP
The New Swiss Data Protection Act - What You Need To Know
FABIAN PRIVACY LEGAL GmbH
More Webinars
Comparative Guides
Anti-Corruption & Bribery
Artificial Intelligence
Banking Regulation
Blockchain
Cartels
More Guides
Mondaq Advice Centres
UK
Coming to and Investing in the UK
Global
Trademarks in SAARC Countries
More MACs
Curated Content
Introduction Of Registry Of Overseas Entities Owning UK Real Estate
Verfides
Upcoming Events
Protecting The Scheme On A Risk Transfer
Gowling WLG
Webinar Birmingham UK
Mondaq Social Media