UK: The Dangers Of Diversion: Advising Mentally Disordered Offenders On The Practical Effect Of Compulsory Detention Under The Mental Health Act 1983

by
6 King's Bench Walk
To print this article, all you need is to be registered or login on Mondaq.com.

(1) That most mental health disposals are initiated at the request of the mentally disordered offender ('MDO') or their representative.

(4) Accordingly, where a MDO has only committed a minor index offence, it will often be the case that an order of compulsory detention under the Act will operate as a disproportionately severe response. Therefore, MDOs in this position may be better advised to seek a penal disposal and advance their mental disorder as mitigation.

The prevailing view within the Criminal Justice System is that MDOs who are afflicted with a disorder at the time of the offence and/or at the time of trial, should be dealt with differently to ordinary offences, namely via diversion to the NHS through the Mental Health Act. However, some forms of diversion, such as compulsory detention in hospital, can have significant implications for MDO's, the most important of which is that it can often act as either a disproportionately mild or disproportionately severe response, with MDOs being made subject to compulsory detention and treatment that is either much shorter or much longer than the penal sanction that would have been imposed on non-disordered offenders committing the same offence.

There is extremely limited data on the practical impact of court orders imposing compulsory detention under the Act. However, such information is important because the vast majority of diversion is initiated at the request of the MDO's representative,1 and as only an average of forty five MDOs are deemed to be too unwell to provide instructions each year,2 it is presumed that the remainder have either agreed or acquiesced to this course. Therefore, this article draws together the limited information that exists, and some new information from the South London NHS Trust, so that MDOs can be better advised on the practical effect of compulsory detention.

Hospital orders are provided for by s.37 of the Act. The criteria for imposition are laid out in flowchart one. An average of four hundred s.37 orders have been imposed every year for the past two decades.3

Technically, s.37 hospital orders only last for six months from the date of sentence, but as the psychiatrist has the power to renew for a further six months, and thereafter for periods of up to a year, with there being no maximum time limit, hospital orders are actually a form of indeterminate detention.4

Patients can be discharged at any time by their psychiatrist or the hospital managers, both of whom have an unfettered discretion to discharge.5 Further, patients are entitled to apply to the Mental Health Review Tribunal ('MHRT') in the second six months of detention, and once a year thereafter.6 That Tribunal can discharge on the basis that the patient is no longer suffering from a mental disorder warranting detention in hospital, and/or they are no longer a risk to themselves or others.7 However, in reality psychiatrists are not quick to discharge those they have recommended to the court as needing a period of treatment in hospital; the hospital managers' discharge rate is less than 3% (all occurring after at least a year in detention);8 and, the MHRTs sit infrequently and their discharge rate is only 30%.9 The combined effect of the above is that the average patient spends over two years in hospital. The range is between three months and thirty seven years, but the standard deviation is only around four months from the two year period. Overall, the practical effect of a hospital order is that it acts as an equivalent to a four year determinate sentence in the penal system.10

Whether or not this period is disproportionately severe depends upon the severity of the index offence. However, it is obvious that the imposition of hospital orders for summary only offences will almost always be disproportionately severe, as the period of detention is likely to be four times longer than the six month maximum available in the penal system. Further, it is important to highlight this, because there are numerous examples where the court has imposed hospital orders for offences that would not merit any custody, let alone four years, such as for minor criminal damage (smashing a pane of glass in a telephone box)11 and also minor common assault (a single elbow and punch to the face causing no lasting injury).12

The severity of a hospital order is considerably enhanced if the court attaches a restriction under s.41 of the Act. The criteria for imposition are laid out in flowchart one. An average of three hundred and fifty five orders have been made each year for the past two decades, although this has been rising since 1998, and five hundred and sixty five were imposed in 2009.13

Overall, the MHRT ordered the vast proportion of discharges (87%) over the last decade.18 And, although the MHRT discharge rate is 29%, over 96% of these were conditional discharges.19 This is critical when it is considered that 30% of those conditionally discharged were recalled.20 The combined effect of the above is that s.37/41 orders last an average of over nine years, rising to twelve years if they are recalled. The range is between one and seventy three years, but the standard deviation is only around nine months. Overall, the practical effect of a hospital order with restrictions is that it acts as an equivalent eighteen to twenty four year determinate penal sentence.21

As with s.37 orders, there is no minimum index offence required. Thus, the risk of s.37/41 orders being disproportionately severe is especially stark in the case of lesser offences. Again this risk is real, with the two cases of criminal damage and common assault given above having hospital orders with restrictions imposed.

Arguably, as s.41 restrictions are public protection measures designed to deal with dangerous MDO (part of the criteria is that the restriction is 'necessary for public protection'), proportionality is less important. Indeed, as with the penal provisions for ordinary dangerous offenders under Part 12 of the Criminal Justice Act 2003 (which were based on the s.41 provisions)22 the criteria for indeterminate detention is based on predictions of future risk rather than the severity of the index offence. However, it is notable that the criteria for indeterminate detention under s.41 are considerably lower than those required by Part 12 (the criteria for the latter are provided in flowchart 2). Thus, a s.41 restriction can be imposed on a MDO where any imprisonable index offence is committed and there is a 'real not fanciful risk' to another individual of any type of serious harm occurring. However, under Part 12 there needs to be a specified violent or sexual offence that has a maximum sentence of ten years or above, and a risk of 'notable importance' of the offender committing another specified violent or sexual offence, thereby causing 'death or serious personal injury,' and the offence must justify a four year determinate sentence. Overall, it appears dangerous penal offenders have more protection against stringent public protection measures than their MDO counterparts.

Under the Act the court has the power to remand a MDO into hospital for medical reports (s.35), for treatment prior to sentence (s.36), and for an interim hospital order to assess the suitability of making a s.37 final disposal (s.38). These provisions are not considered in detail owing to the fact they are only used infrequently – with each only being imposed between twenty and one hundred times a year.23

However, what should be noted is that there is no provision to count the time spent in hospital on remand as time served towards a final mental health disposal – i.e. if a MDO spent four months on remand in hospital and then a s.37 were imposed, then that order would begin from the day of imposition and the MDO would still have wait six months to apply to a MHRT. This is quite different to ordinary offenders, who can count time served on remand against any sentence of imprisonment (s.240 of the Criminal Justice Act 2003), and also MDOs that are remanded into hospital but who receive a penal disposal, who can also count the remand period as time served (s.240).

The figures above provide a reference point for MDOs seeking a hospital disposal, as well as indicating that there may be considerable risks associated with this course if the offence is only minor. Indeed, in such cases the MDO may be better advised to seek a penal disposal and advance in mitigation the fact their mental disorder may indicate 'significantly lower culpability.'24 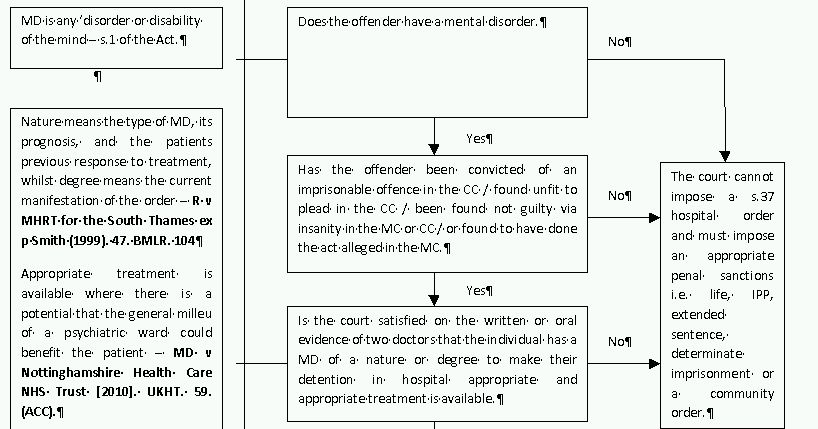 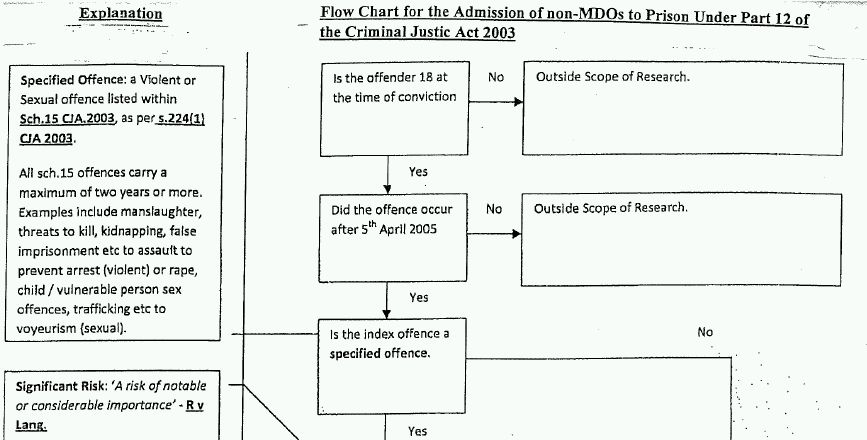 1. This was the expectation under the Home Office Circular No 71/1984, para 25, and this has largely been realised in practice.

2. This is based on the average number of offenders to be found 'Unfit to Plead' under the Criminal Procedure (Insanity) Act 1964 each year on the basis that it is inherent that such individuals cannot understand the court process – R v Pritchard. 1836. 7. C&P. 303; see also Department of Health, 'In-patients formally detained in hospitals under the Mental Health Act 1983 between 1993 to 2004,' Bulletin 2004/22 (2004).

8. Statistics relating to the hospital managers are taken from those published in an internal review in the South London NHS Trust (2008).

19. In 2010 there were 347 discharges from a total of 1203 applications, with 14 being absolutely discharge red, and 333 being conditionally discharged. Information from the authors Freedom of Information Act request.