UK: All About That Baseline: Developments In The UK ETS And The CORSIA Emissions Baseline

The landscape of environmental regulation is changing for aviation operators, due to a powerful combination of global pressures to reduce emissions for one of the transportation sectors with the largest emissions outputs. Plans have recently been published for the UK Emissions Trading System (UK ETS), which is proposed to take the place of the EU ETS when the UK leaves the European Union at the end of 2020.

Plans to establish a baseline emissions reference for the International Civil Aviation Organisation's Carbon Offsetting and Reduction Scheme for International Aviation (CORSIA) have also been adjusted to reflect the dramatic drop in 2020 aviation emissions resulting from responses to the COVID-19 pandemic, in the context of a heated debate over long-term environmental goals and the aviation industry's survival.

On 1 June 2020, the UK's Department for Business, Energy & Industrial Strategy published the consultation outcome of its plans to implement a UK ETS starting in 2021 ('The Future of the UK Carbon Pricing'). In the UK, this will replace the EU ETS when the UK leaves the EU on the termination of the Brexit transition period. This is part of the UK government's plan to drive domestic and international action on climate change and, as such, to deliver on its net-zero carbon target by 2050.

The clear ambition is for the UK to negotiate a linking agreement with the EU ETS to allow UK operators to maintain access to the world's largest carbon market (and avoid the potential vagaries of a UK-only carbon pricing mechanism). Whether and when that happens - any linkage could take several years to agree - will depend on the outcome of the ongoing trade negotiations between the UK and the EU.

The familiar aspects of the new scheme are intended to allow for a smooth transition to the new UK carbon-pricing regime, both from a compliance and carbon trading perspective.

Should the UK not be able to implement a UK ETS by the end of the Brexit transition period, the UK will likely fall back on a carbon tax as an alternative (which was announced last year as the default interim measure for the UK pending a long-term alternative scheme). A separate consultation on this is in the pipeline. However, much of the legal and governance framework for a UK ETS is already in place through the UK's participation in the EU ETS, so the UK government should be able to realise its ambitions for dovetailing the UK scheme with its exit from the EU ETS.

The UK ETS and aviation

The UK ETS is set to cover all sectors that the EU ETS currently regulates, including aviation. The system will apply to domestic flights within the UK as well as flights between (to and from and vice versa) (1) the UK and Gibraltar, (2) the UK and the European Economic Area, and (3) the UK and Switzerland, if an agreement is reached with the EU.

The UK ETS will closely resemble the EU ETS but with some key differences. The familiar aspects of the new scheme are intended to allow for a smooth transition to the new UK carbon-pricing regime, both from a compliance and carbon trading perspective. The first phase of the UK scheme is expected to run alongside Phase IV of the EU ETS (2021-2030).

However, the UK's plan contains several features that appear more progressive than the EU version, which could lead to UK emitters facing different carbon costs than their continental peers.

In order to reach net-zero emissions by 2050, the UK ETS emissions cap will initially be set 5 per cent below its equivalent share of the EU ETS cap for Phase IV - in other words, the UK is being more ambitious than it would otherwise have been obliged to be under the EU ETS. The Committee on Climate Change will advise the government later this year on cost-effective measures to achieve net-zero emissions. The aim is to align the cap with a net-zero trajectory by January 2023.

As with Phase IV of the EU ETS, participants will not be eligible for offsets within the UK ETS, but the government has announced that it is open to reconsidering this option during one of its 'whole-system reviews'. The government has also said that it will begin a review on how the UK ETS could interact with the implementation of CORSIA.

CORSIA and the emissions baseline

The establishment of the CORSIA emissions baseline has been another major concern for operators of international flights, as the effect of the global flight groundings in response to the COVID-19 pandemic impacts 2020 activity levels.

The baseline was to be calculated on the basis of CO2 emissions reported by the scheme participants over the course of 2019 and 2020. Emissions in excess of the baseline from 2021 onwards would need to be offset, as per the chart below. The amount to be offset is 'shared among aeroplane operators participating in the CORSIA based on the sectoral growth factor and the individual CO2 emissions of the operators'.1 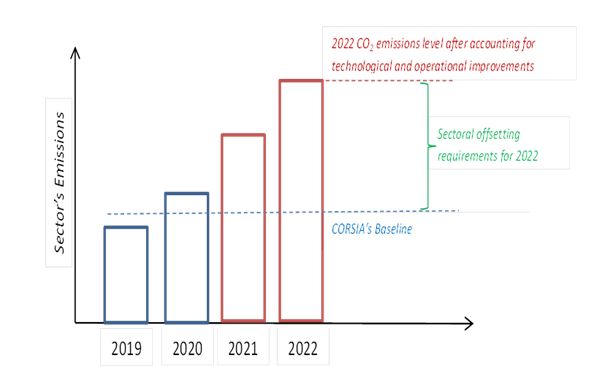 As we have noted in one of our previous posts, CORSIA takes a two-pronged approach to ensuring that airlines are able to cap their emissions at 2019/2020 levels, by imposing reporting requirements to encourage emissions reductions in the first instance by way of transparency, but also by establishing an offsetting scheme requiring carriers to buy carbon credits from other industries that have made more progress in their reductions, thereby financing advances in other fields while aviation technology catches up.

However, the sharp decline in aviation traffic as a result of the COVID-19 pandemic has seen a near-shutdown of airline operations, meaning that the emissions recorded for 2020 will be substantially lower than had been expected. This would in turn produce a much lower baseline than the industry had anticipated.

In response, the European Council of the European Union decided on 9 June 2020 that the baseline reference period for emissions levels should be 2019 only. The International Air Transport Association's CORSIA position paper also called for this change as the costs for airlines of offsetting emissions generated in excess of an artificially low baseline would be prohibitive, particularly in an industry hit as hard by the pandemic as aviation has been, and would lead participants to reassess their involvement in the program.

The International Civil Aviation Organisation announced yesterday that for the purposes of the baseline calculation, 'the value of 2019 emissions shall be used for 2020 emissions to avoid inappropriate economic burden on the aviation industry, for the CORSIA implementation during the pilot phase from 2021 to 2023',2 which will no doubt be welcomed by operators. The 2019 emissions will also be used for other 'design elements' of the program, including the threshold to be used for parties joining CORSIA at a later stage.

It is to be hoped that this adjustment in the baseline calculations will be seen as a positive step for the industry. The artificially low baseline produced by the inclusion of the 2020 emissions data would have been a powerful stimulant from an environmental perspective, but in the current circumstances the additional costs for airlines already struggling would likely have led to withdrawal from the program. This decision should enable participants to continue their engagement with CORSIA, and ensure that the program remains meaningful and effective as the industry recovers.