The proposed standard, the FRSME, was based on the International Financial Reporting Standard for Small and Medium-sized Entities (IFRS for SMEs) with minimal amendment. As a consequence many accounting choices offered by current UK GAAP were not permitted and other aspects of established accounting practice were not addressed.

The ASB has taken into account the comments received and in January it issued its revised proposals in the form of FRED 48 'The Financial Reporting Standard applicable in the UK and Republic of Ireland' (draft FRS 102) (the 'proposed Financial Reporting Standard'). While the revised proposed standard is still based on the IFRS for SMEs, the ASB has included a number of accounting options already permitted by current UK GAAP as well as additional guidance in a number of areas.

Among the accounting policy choices that were not permitted by the proposed FRSME, but which now look set to be retained in the proposed Financial Reporting Standard, are the ability to revalue fixed assets and, where certain criteria are met, to capitalise development and borrowing costs.

While there will be much that is familiar to UK preparers, there will be some areas of significant change which will have an effect on the reported results and financial position of many entities. The major differences are considered in the table opposite.

Certain disclosure exemptions will be available in the financial statements of subsidiaries and parent companies applying the proposed Financial Reporting Standard. The exemptions will be available where the relevant financial statements are included in consolidated accounts that give a true and fair view and are publicly available. These exemptions, and the circumstances in which they may be taken, mirror the concessions offered to such entities applying IFRS as discussed in the later article "Reducing the Disclosure Burden".

The ASB had originally suggested a separate, supplementary, standard containing guidance specific to PBEs. It has, however, now determined that it would be preferable to include the guidance within the proposed Financial Reporting Standard and the additional requirements have therefore been integrated but are separately identified as applying to PBEs. 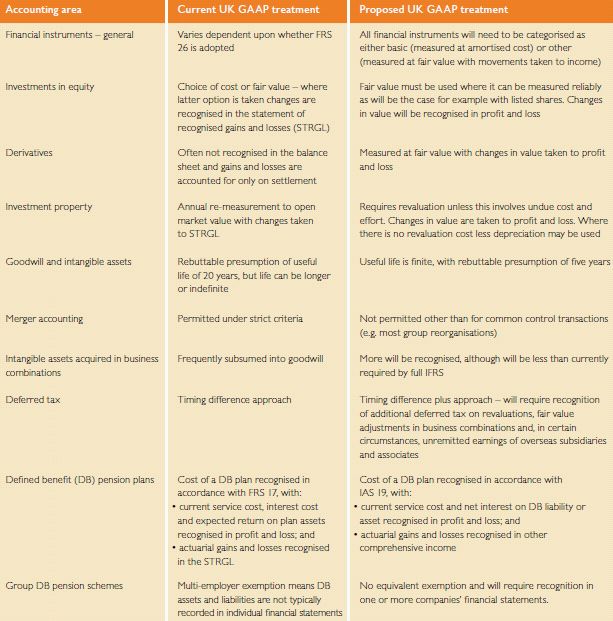