As of February 2022, Turkey's renewable energy capacity is approximately 53,500 MW amounting to just over half of Turkey's total installed capacity. This was largely thanks to YEKDEM, Turkey's USD-based feed-in tariff. Depending on the renewable energy source, this mechanism provided guaranteed purchase prices between US$7.3 and US$13.3 per KWh for the first ten years of the operation period.

The USD-based YEKDEM was replaced by a TRY-based YEKDEM for the power plants commissioned after 30 June 2021. Although the TRY-based prices are escalated, this new YEKDEM has not provided a meaningful contribution to the installation of new renewable capacities. This is mainly due to the heavy devaluation of TRY, which triggers higher interest rates and equity contribution requirements.

Yet, Turkey must keep installing additional renewable capacities. This is mainly because:

In view of this, we set out below some of the hot topics in the Turkish renewable energy market. These topics revolve around the said need to increase renewable power capacity in the circumstances where there is no efficient feed-in tariff in place:

Temporary Article 29 of the Electricity Market Law provided the power plants, which were in the development phase, with the right to have their performance bonds released following the termination of their pre-licences or licences. This resulted in 1,026 MW of available capacity (Enerji IQ, 9 September 2021). Energy Market Regulatory Authority (EMRA) and TEIAS, the state-owned transmission system operator, have then issued various decisions and announcements to allocate this available capacity for new renewable energy investments.

The latest EMRA decision no. 10822 dated 3 March 2022 (EMRA Decision) and accompanying TEIAS announcement dated 7 March 2022 (TEIAS Announcement) provide that the available capacity will be allocated for the following purposes:

This inclusion does not require a new licence as the combined electricity output of the main and auxiliary source cannot exceed the licenced electrical capacity.

The TEIAS Announcement provided capacities for the hybrid investments, as set out in the map in figure 1, below. The installed capacity of the auxiliary source cannot exceed 15% of the electrical capacity of the main source.

The TEIAS Announcement provides that the capacities in the following regions will be allocated to the licence-exempt renewable investments under Article 5(1)[h] of the License Exempt Electricity Generation Regulation. Without the need to obtain a licence from EMRA, this Article enables renewable investments corresponding to the contractual capacity of the relevant consumption unit under the connection agreement. See figure 2, below. 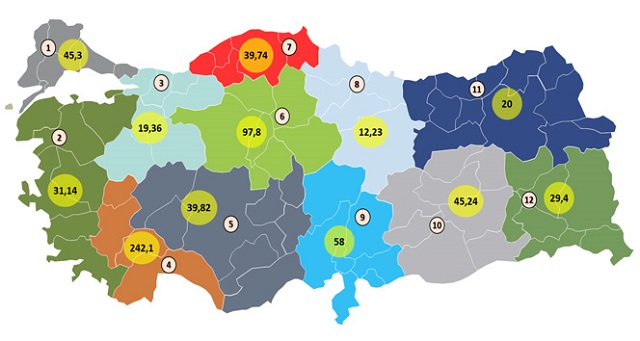 It is noteworthy that such licence-exempt projects are granted with additional incentives with amendments introduced to the Investment Incentive Decree on 24 February 2022. The Decree divides Turkey into six main regions. The first region is the most developed one and the sixth being the least. As such, the scope of incentives broadens as one moves from the first through the sixth region. With the said amendments to the Decree, the licence-exempt solar and wind investments in the first three regions, which are structured for self-consumption purposes, will be able to benefit from the incentives that the fourth region can enjoy.

Such 'fourth region' incentives include:

Before 2017, the bidders that wished to develop a wind or solar power plant in the same connection area had been competing in tenders announced by EMRA based on their offers for the highest contribution fee payable to TEIAS.

As of 2017, Turkey shifted its focus on YEKA tenders. Under the YEKA structure, the bidders place their bids for the lowest guaranteed purchase price based on Dutch auction to develop, construct, and operate renewable power plants on specific 'renewable energy resources areas'.

So far, Turkey completed the tender of 4,570 MW wind and solar capacity with YEKA tenders. Above is a chart regarding the upcoming YEKA tenders.

The guaranteed prices in the recent tenders have been based on TRY. TRY prices, subject to a USD cap, are escalated as per a basket composing of USD, EUR as well as consumer and production price indices. Notwithstanding this, the YEKA structure has posed certain bankability and feasibility issues. To mitigate these, the tender documentation for the latest 300 MW solar YEKA tender on 30 March 2022 was revised in early March 2022. Most notably: