Turkey: What The New Turkish Incentive System Has To Offer Foreign Investors?

1. Objectives of the Incentive System

Incentives have long been utilized in boosting internal initiatives as well as attracting direct foreign investment. Turkey had been offering incentives for a while, when an incentive system was adopted in 2012 with Decree no. 2012/3305 aiming to boost development in line with economic and social components of the country.1 In this regard, the main objectives of the incentive system are to:

The incentive system was organized with a sector specific approach and special attention to export-oriented investments. Ministry of Economy (Ministry) is responsible for the execution of the System. 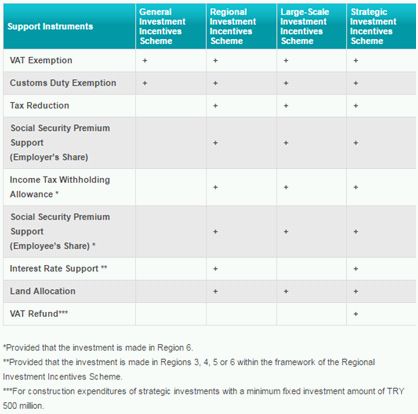 Another incentive granted within the scope of the System is interest support. It is a financial support provided for loans with a term of at least one year obtained within the scope of IIC. This support can also be reimbursed for a maximum of five years if justified by the Ministry. Investors holding IIC may also be allocated land for the execution of investments. Such allocation, depending on the availability of the land, is made by the Ministry of Finance. Within the context of the System, VAT collected on building and construction for strategic investments with fixed investment amount of TRY 500 million (approximately US$140 million) is refunded. Completion of the entire investment is not a requisite for the refund. Lastly, income tax for additional employment created by the investment will not be subject to withholding taxes under IIC.

At this point it should be reminded that under each system only certain incentives are offered. The table shows incentives that are available under each incentive system.3

The System stipulates four different systems to which it offers different incentives. Investors can apply for one of the systems provided within the System: 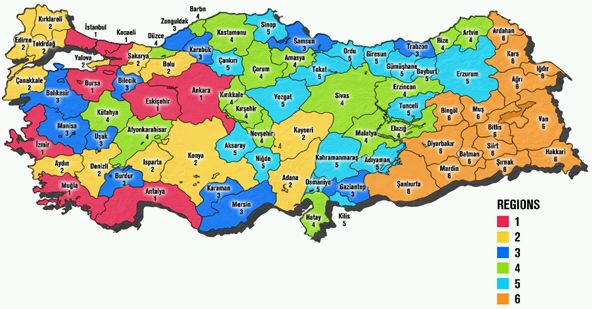 Turkey is divided into six regions in order to determine region specific incentives.4 The minimum investment amount required for benefiting a certain system is also different in each region.

General Investment Incentives System: All projects meeting the capacity conditions and minimum fixed investment amount requirement, regardless of execution region of the investment, benefit from incentives provided under this system.

Incentives provided for these categories are designated to be more advantageous compared to the Regional Investment Incentives System given the scale of these projects.

Regional Investment Incentives System: System is established with a sector specific approach. In doing so, sectors to be supported in each region are determined considering regional potential and economic conditions. Under this system projects according to their region, are required to meet a different amount of minimum investment and benefit from different incentives.

Investors should apply for the IIC in order to benefit incentives under a certain system. Application should be made to the Ministry (Directorate General of Implementation of Incentive and Foreign Capital) or local authorities (Chambers of Industry or Development Agents).

Real persons, partnerships, capital stock companies, cooperatives, unions, joint ventures, public institutions and organizations, professional organizations with public institution status, associations and foundations and branches of foreign companies meeting conditions stipulated under each system are eligible for applying. As provided by the Act, foreigners and legal entities established per foreign laws also benefit from incentives granted by the System under the principle of equal treatment.

2. Contribution amount to investment is the amount of tax which is not collected by the Tax Authority from the investor holding IIC.

3. The table can be found on the website of the Investment Support and Promotion Agency of Turkey.

4. The map can be found on the website of Investment Support and Promotion Agency of Turkey.