Since the end of 2018, the Turkish Competition Authority's ("TCA") focus on cinema sector in Turkey has warmed up again. After more than two years following the publication of the Sector Report on Cinema Services ("Sector Report"), the TCA recalled the need of conducting a comprehensive analysis on the dynamics of cinema sector and settled practices of the undertakings active in different levels of production and distribution chain. It is evident that popular discussions receiving widespread media attention on (i) whether producers and distributors active in Turkey are intervening in the ticket prices of exhibitors and (ii) whether cinema chain operators enjoying significant market power and bundling the cinema tickets with side products (e.g. popcorn menu). The last played an important role in the TCA's recent initiative for examining the sector.

In this article, we aim to provide insights on how the TCA evaluated the market structure of cinema sector in Turkey and how it participated in the abovementioned popular discussions from a competition law perspective by referring to two recently published decisions on Cinema Producers1 and Cinema Distributors2 cases.

The preliminary investigation subject to Cinema Producers case aimed to examine whether four of the cinema producers in Turkey intervened in critical parameters (i.e. price, rebate systems and sale conditions) in exhibition level of the market. The producers under question were alleged to infringe Article 4 of Law No. 4054 on Protection of Competition ("Turkish Competition Act") through the decisions and conducts of Association of Television and Cinema Producers ("TESIYAP"). The allegations were mainly based on TESIYAP's e-mail messages sent to the exhibitors in order to warn them about the necessity of obtaining the permission from the relevant producers before adopting any change in ticket prices and structuring a promotion or discount. Prior to delving into its competition law analysis, the TCA provided detailed information pertaining to the sui generis dynamics and competitive framework of the cinema sector in Turkey.

In line with the Sector Report, Cinema Producers decision reiterates that, similar to the global structure of cinema sector, in Turkey it is divided into three main segments: (i) production, (ii) distribution and (iii) exhibition. Within the production level, the movies are prepared with all technical capabilities and possible formats. Colloquially, in production level, ideas are transferred into the movie until being ready to be screened in movie theatres. While preserving intellectual property rights, producers transfer the distribution rights to the distributors. Therefore, distributors are working as intermediaries between producers and exhibitors. In this regard, the distribution model in Turkish cinema sector, which is called as rent a distributor model, differentiates from the global distribution systems. Therefore, certain operational costs such as print and advertisement expenses are bearded by the producers rather than the distributors. In exhibition level, cinema theatre operators are conducting snack bar activities along with the exhibition of the movies in theatres which require significantly high investment costs. Moreover, exhibitors creates advertisement spaces in the theatres and generates revenue by renting those.

In the Turkish cinema sector, revenue generated from exhibition of movies in theatres is allocated between producers and exhibitors based on revenue sharing model (i.e. 50% - 50%). Distributors collect commissions (e.g. between 2% - 10%) from the total revenue and transfer the share of producers. Although different revenue models, such as minimum guarantee fee, are alternatively applied in relatively exceptional cases, revenue sharing can be deemed as a settled model in the sector. Accordingly, such revenue sharing model creates dependency between revenue generated by exhibitors through ticket sales and revenue of producers. Thus, ticket prices, discounts and sales conditions (e.g. duration of screening, number of theatres, screening density, etc.) directly affect economic interests of producers. Unsurprisingly, the TCA found out that producers are tend to control the ticket prices to a certain level. 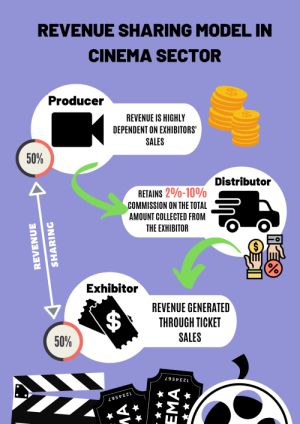 Having said that, the TCA constructed its arguments on questioning the nature of relationship between exhibitors and producers from a competition law standpoint. As mentioned above, producers continue to remain the holder of intellectual property rights of a produced movie and merely distribution rights are transferred to distributors, whereas exhibition rights for a certain period are transferred to exhibitors through distributors. In this respect, the TCA concluded that as the relationship between producers or distributors and exhibitors resembles to licensing agreements rather than purchase and sale or resale relationship. Thus, it cannot be deemed as a vertical relationship under the Turkish competition law regime and cannot benefit from the protective cloak of Communiqué No. 2002/2 on Block Exemption for Vertical Agreements ("Block Exemption").

Accordingly, the TCA evaluated that although it would be in conformity with the natural flow of commercial life for producers to have an incentive to maximize their revenue, which is ultimately dependent on the ticket sales made by exhibitors, imposing an approval mechanism on exhibitors for their ticket prices, discounts or promotions would still indirectly lead to joint determination of prices. The reasoning behind this outcome is based on the fact that once a producer does not approve a discount offer, this would increase the exhibitor's costs and create a disincentive to offer lower prices to end-consumers. Furthermore, the TCA also stated that even if such approval mechanism is not actually implemented, the mere existence of the mechanism would infringe competition law by object.

As a result, the TCA did not find adequate evidence proving the existence of such approval mechanism and decided not to launch a fully-fledged investigation.

The preliminary investigation subject to Cinema Distributors case aimed to examine whether (i) distributors discriminated against local exhibitors in favour of cinema chains with regard to screening duration of movies, (ii) Mars Group abused its alleged dominant position by bundling side products with movie tickets and (iii) TME Production forces the exhibitors to purchase its movies as a bundle.

This decision is also emphasizing that cinema sector differentiates from traditional goods and services markets as there is no close linkage between the final price and demand. Moreover, costs do not generally play a decisive role in determination of final prices. The decision also reiterates the characteristics of production and distribution chain in cinema sector. In order to avoid tautology, we are not referring to the same explanations within this part of the article.

In parallel with the findings provided within the Sector Report, the TCA acknowledges that distributors are recommending minimum screening duration for each movie that they distribute and negotiating on how many screens will be reserved for those movies. Taking into account the fact that revenue sharing model applied in cinema sector necessitates to take action for distributors to be assured about exhibitors' performance, recommendations on sales conditions to be provided by exhibitors would not be deemed as intervention without implementation of sanctions. Therefore, the TCA evaluated whether any sanctions were implemented against exhibitors which did not comply with the recommendations of distributors. The presence of several examples demonstrating that exhibitors can take contrary decisions to recommendations of distributors led the TCA to conclude that there is no infringement under Turkish competition law regime.

In terms of Mars Group's alleged bundling conducts, the TCA found that unbundled sales have a vast majority in Mars Group's total sales and bundling is not a systematic conduct for Mars Group. Thus, it concluded without conducting dominance test that Mars Group did not infringe any competition law rule.

Dissenting opinion of two members of the Turkish Competition Board ("Dissenting Opinion") argues that the main concern in bundling conducts boils down to the question on whether Mars Group's discounts through bundling are reflected in final ticket prices or side products. In this respect, the Dissenting Opinion suggests that a dominance test should have been conducted prior to the final decision and impacts on consumer welfare should have been evaluated.

Signals of A Conservative Approach?

As per the decisions discussed above, it is evident that the TCA acknowledges the distinctive characteristic of cinema sector and the direct link between the ticket prices/discounts offered by exhibitors and revenue generated by producers and distributors due to revenue sharing model. That said, the TCA sets forth a clear approach suggesting that revenue sharing model, in and of itself, does not provide a solid justification for direct or indirect intervention on the final ticket prices and discounts. Furthermore, any approval mechanism set out by producers in order to force exhibitors to obtain approval prior to implementation of final ticket prices or discounts would lead to directly or indirectly lead to price fixing, and accordingly, anti-competitive agreements under Article 4 of Turkish Competition Act.

Moreover, as these decisions are blocking the potential arguments targeting to benefit from protective cloak of Block Exemption as the TCA evaluated the relationship between producers or distributors and exhibitors in cinema sector as licensing-like which is not deemed as a vertical relationship under Turkish competition law regime.

Therefore, the arguments merely depending on sui generis characteristics of cinema sector does not provide a proper reasoning for intervention in final ticket prices or rebate systems applied by exhibitors. The TCA set a clear benchmark for evaluations on such practices.