South Africa: Is Apple Really Threatened By The Pear?

A recent furore about apples and pears raises a number of familiar themes: the scope of trade mark rights; trade mark overreach; trade mark bullying; the PR aspects of trade mark enforcement; the unconventional options available to those that are totally outgunned in a trade mark dispute; and the effectiveness of appealing to the court of public opinion.

In this case, Apple opposed a US trade mark application for a trade mark comprising a pear logo. The trade mark application was filed by a small (seemingly five-person) US company called Prepear, although there does also appear to be a parent company involved called Super Healthy Kids. The applicant offers a meal-planning service, and this seemingly takes the form of an app that allows users to discover new recipes, plan meals and source ingredients.

In an opposition document, which apparently runs to 352 pages, Apple claims that there will be confusion with the famous Apple logo. The company claims that Prepear's trade mark "consists of a minimalistic fruit design with a right-angled leaf, which readily calls to mind Apple's famous logo and creates a similar commercial impression." Moreover, says the document, "the Apple marks are so famous and instantly recognizable that the similarities in the applicants' marks will overshadow any differences and cause the ordinary consumer to believe the Applicant is related to, or affiliated with or endorsed by Apple." 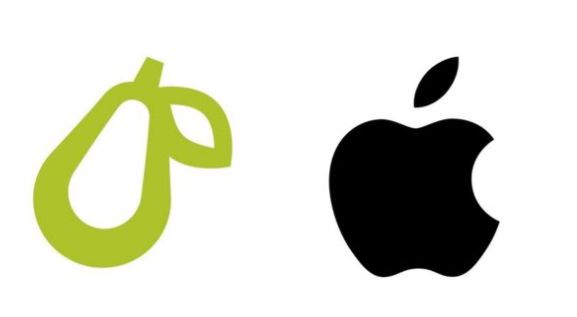 Apple further claims that the services sought by Prepear are "within Apple's natural zone of expansion". The company makes the point that it too does healthcare, nutrition, general wellness and social wellness, citing as an example its Watch Line, which allows users to manage nutrition goals. Finally, Apple makes the claim that the Prepear trade mark will dilute the distinctiveness of the Apple logo.

In response Prepear claims that Apple is "abusing [its] position of power by going after small businesses", forcing them to change logos. In addition, Prepear has resorted to tactics that might have been unthinkable a few years ago (or at the very least have been regarded as highly unconventional) but are now becoming increasingly commonplace. Prepear has effectively lodged an appeal with the court of public opinion. It has done this by starting a petition that asks people to show their disapproval of Apple for starting expensive legal proceedings against a company that uses logos that "don't look anything like Apple's logo or aren't in the same line of business as Apple at all." The so-called "save the Pear from the Apple" petition apparently already has more than 14 000 signatures.

We have been here before. A few years back, we reported on a case in Europe where the court ruled against Apple in an opposition that it had lodged against a trade mark application for a pear logo. In that case, the application had been filed by a Chinese company called Pear Technologies Ltd, and it covered goods and service far more closely related to Apple's core business, namely computer-related goods and services in classes 9, 35 and 42. The court, in that case, overruled an earlier decision and found that the trade marks were clearly distinguishable. Apples and pears said the court (although perhaps not in these words) – very different things!

The trade mark enforcement landscape has changed quite significantly over recent years. Trade mark owners, indeed all IP owners, need to consider issues that go beyond the merits of the case when it comes to the enforcement of rights. They need to recognise that the dispute they're about to embark on may well become news. They also need to consider the reputational issues that may go with that, especially if the merits aren't that clear cut or if the action in any way smacks of bullying.

ARTICLE TAGS
South Africa Intellectual Property Trademark
POPULAR ARTICLES ON: Intellectual Property from South Africa
Procedure For Trademark Search And Online Registration In Nigeria
Resolution Law Firm
The trademark search is actually the first step for trademark registration in Nigeria.
Types Of Trademarks: All You Need To Know
Abou Naja
As industries race to gain a legal monopoly on their unique innovations through marks registration, we are inundated with an ever-increasing number of products with
Registration Of Patent In Nigeria
T & A Legal
A substantial political economy literature, dating back to the eighteenth century, exits on the determinants of property rights.
Strengthening Intellectual Property Rights And Protection In Nigeria
Banwo & Ighodalo
Concerted efforts have been made over the years at promoting IP rights in Nigeria with some positive results being achieved.
Recommended Ways To Protecting Business Concepts As Intellectual Property Rights In Nigeria
S.P.A. Ajibade & Co.
Not all creations of the mind are regarded as intellectual property protectable under intellectual property laws in Nigeria, as these laws stipulate the criteria that must be satisfied...
History And Evolution Of Intellectual Property
Abou Naja
Intellectual Property may sound like a modern-world invention, but it has actually been around since the development of civilization.
FREE News Alerts
Sign Up for our free News Alerts - All the latest articles on your chosen topics condensed into a free bi-weekly email.
Register For News Alerts
Article Tags
South Africa Intellectual Property Trademark
Similar Articles
Powered by mondaq AI
MATCH
56%
Naming A New And Unique Thing KISCH IP
63%
Trade Marks Matter, Especially During COVID! Adams & Adams
74%
In-Cider Scoop: Descriptive Or Distinctive Trade Marks? KISCH IP
59%
Are Ethiopia's Trade Mark Laws Keeping Pace With Its Economy? Adams & Adams
55%
COVID-19: Is It Sparking IP Interest? ENSafrica
Related Articles
Patent Applications In The African Continent Having Origin In China Inventa International
How To Protect Your Business Ideas And IP …No, It Is Not Just About Patents, Trademarks And Copyrights Schoemanlaw Inc.
"I Can't Breathe"– The Ethics And Feasibility Of Trade Mark Registrations In The Context Of South Africa KISCH IP
Why South African Businesses Should Apply For A Section 11D Tax Incentive Today. KISCH IP
Lionel Triumphs In A "Messi" Trade Mark Battle KISCH IP
Mondaq Webinars
Merger Control Trends in Turkish Competition Law
ELIG Gürkaynak Attorneys-at-Law
Webinar Istanbul Turkey
Employment Law: Challenges that Lie Ahead for UK Employers in 2021
Stewarts
Webinar London UK
More Webinars
Comparative Guides
Private Equity
Mondaq Advice Centres
Global
Trademarks in SAARC Countries
Global
Investment Immigration
More MACs
Upcoming Events
Mondaq Social Media