Worldwide: Pause For Thought - Misconceptions Of IP In Africa

There are multiple misconceptions about different topics in Africa and IP is no exception, naturally. The answer is always education, of course. Lack of information and knowledge can easily lead to false understandings and misconceptions of any kind.

IP in Africa can be confusing to some people and businesses, especially for companies and IP owners that are mainly used to protecting and enforcing their intellectual assets in other regions of the world and have limited or no experience at all within the African continent. We highlight the below misconceptions that are common to our clients:

Most people have the wrong idea that protecting IP in Africa means dozens of filings in multiple countries and jurisdictions and that each filing would be very expensive. In the end it's not that different from other regions in the world and Africa has the advantage of having two regional agreements (the African Regional Intellectual Property Organization (ARIPO) and the Organisation Africaine de la Propriété Intellectuelle (OAPI)) that cover a big part of the continent, making it easier and cost effective when IP owners consider a regional protection.

Many clients think that they would need translations in multiple languages when it comes to filing a patent and even with supporting documents or lists of goods and services for trademark applications, etc. English, French, Arabic and Portuguese are the four main working languages needed and used for translations to cover all the continent. If you compare it with Europe, for example, imagine the amount of translations you would need to file a regional patent compared to Africa!

Apart from translations, most people also have a common misconception regarding documents that would need to be legalised to support trademark or patent applications in Africa. In most countries we only need a power of attorney (POA), others require it only to be notarised. Just a few countries in Africa such as Ethiopia, Angola or Egypt still require legalisation of POAs or corporate documents in their countries of origin to support applications of foreign filers.

One question we hear all the time - is it worth it to file in Africa? Many companies still don't trust the African IP systems work and rely on some bad experiences they had or heard about in the past. Things have changed a lot in recent years and many IP offices and local authorities have learned and evolved over time. Also, IP law firms have grown and gained expertise in the region as well, providing clients with a better service, compared to what you can find in other regions of the world. The World Intellectual Property Organization (WIPO), European Patent Office, European Union Intellectual Property Office, national IP offices in Europe and other regions have been collaborating with regional and national IP offices in Africa. This is very important, and we must acknowledge that the training and experiences exchanged over the last two decades have been a strong push towards harmonisation and improvement of African IP systems.

Enforcement in Africa is a main concern for many companies when doing business or exporting goods to the continent. The local laws have changed, and bigger risks arise to the ones infringing third parties' IP. There was a time that we couldn't find who was behind a bad faith action, or an address where we couldn't even send a cease-and-desist letter to an infringer, in many territories. This has changed a lot and it's much easier nowadays to identify and notify infringers.

The customs and economic police departments in the African region have nowadays much better training and experience working with counterfeits too. The internet has also helped a lot in this field, providing more information exchange between authorities, within the countries and crossing borders too. The World Customs Organization and several customs departments from countries in different regions of the world have been collaborating with African authorities and every year this is improving too.

Africa is usually the region of the world with less business investment in general and IP protection, as a main driver for that investment is also limited when compared to other regions. There are many reasons, mainly related to local and regional economic factors, that do not attract as many foreign investors as in other areas of the world.

However, what we see is continuous growing investment every year, in multiple countries and business sectors, at their own pace. There is also a significant change in origin of that investment, with a big part of that coming now from Asia (and China in particular). Africa used to have much more European and US products and brands in the local markets and in recent years, much of that has been replaced by products from Asia.

Additionally, African IP offices have been receiving more filings from Asian applicants over the last decade than it used to be. We also see more enforcement cases involving Asian companies, something that wasn't common a few years ago.

There are significant challenges in Africa regarding IP protection and enforcement that governments should focus on. For example:

These are just a few examples of some investments the governments in Africa should focus on, in general. In the end, the more Africa promotes and invests in its IP systems, the more foreign companies will trust and redirect foreign investment to it.

What the wider world could learn from African IP

Generally speaking, people are more informed about other regions in the world than Africa: either about economy, laws and agreements in place, tourism, what people buy, how many languages they speak, etc. In the end, it's not about IP only, it's information about Africa in general.

For example, people have no idea how big Africa is or know how many countries comprise the continent and its surrounding islands. 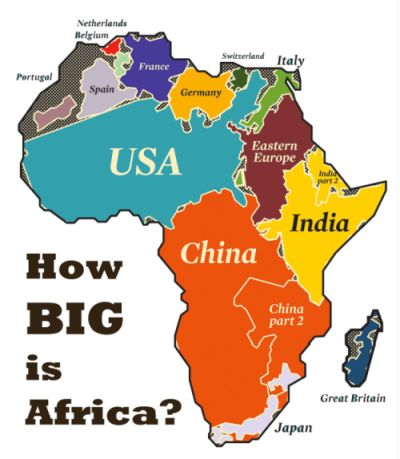 Africa holds 59 countries (although four of them are still dependencies of the UK or France, which also has IP implications) and the area of those countries is equivalent to the area of the US, China, India and most of Europe combined.

In terms of IP, there have been significant developments in many of these countries every year and Africa has two regional agreements for regional patent and trademark protection, that combined together cover more than 30 countries - around two thirds of the continent. That doesn't happen anywhere else in the world.

IP is integrated in traditional knowledge (TK), which is, in accordance to WIPO, "a living body of knowledge passed on from generation to generation within a community".

TK may be found in several contexts, including agriculture, science or even medicine and there are several examples of traditional knowledge in Africa.

The protection of TK as an autonomous IP right is only now becoming a reality around the globe and particularly in the African continent.

Innovations based on TK benefit from the protection of patent, trademark and geographical indication. It may also be protected as a trade secret or confidential information, however, TK as such is not protected by any system of IP. This is the so-called defensive protection of TK.

The positive protection of TK is, however, currently on the table and negotiations on an international legal instrument for the protection of traditional knowledge are taking place within WIPO, particularly in the WIPO Intergovernmental Committee on Intellectual Property and Genetic Resources, Traditional Knowledge and Folklore, in order to address the subject.

Despite this, there are some good example, in Africa, where countries are putting an effort to protect TK and where there is obviously the need to protect the countries' inheritance. South Africa and ARIPO can be given as an example of this, as these are at the forefront of TK protection.

On one hand, South Africa has amended the Intellectual Property Law, through Amendment Act No 28 of 2013, in order to provide for the recognition and protection of certain traditional and indigenous terms or expressions and therefore, the protection of the same is since then expressly determined under the law.

The recognition of the traditional knowledge as cultural resource, in accordance to the preamble of the Amendment Act, "will benefit the country and will ensure that fair financial benefits will be received by indigenous communities".

On the other hand, ARIPO also addressed the positive protection of traditional knowledge by way of creating a sui generis indigenous protection.

The Swakopmund Protocol on the Protection of Traditional Knowledge and Expressions of Folklore within the Framework of the ARIPO was adopted by the Diplomatic Conference of ARIPO at Swakopmund (Namibia) on 9 August 2010 and amended on 6 December 2016. At this moment, the protocol counts with the following adherent states: Botswana, Gambia, Liberia, Malawi, Namibia, Rwanda, Zambia and Zimbabwe.

Despite the fact that both legal systems are fairly recent, there is no doubting the importance of TK to the development of a country and therefore, African countries should be praised for the boldness in which they are endeavouring to protect their TK.

This article was originally published in the Intellectual Property Magazine (July/August 2020 issue).

ARTICLE TAGS
South Africa Intellectual Property Patent Trademark
POPULAR ARTICLES ON: Intellectual Property from Worldwide
GCC New Patent Amendments Effective January 01, 2023
Audiri Vox
The Gulf Cooperation Council (GCC) Patent Office has resumed handling of patent applications, examinations and annuities on behalf of the Kingdom of Bahrain and the State of Kuwait from January 01, 2023.
Moral Of The Story
Adams & Adams
Authors of copyright protectable works retain certain rights despite not being the owners of such copyright
Dubai Customs Registers 4,344 Trademarks To Protect Intellectual Property Rights
United Trademark & Patent Services
As it is a known fact, Dubai is the commercial hub of the Middle East and is a busy route for imports and exports.
The GCC Patent Office To Handle New Applications From January 2023
Gowling WLG
In the latest Official Gazette issued by the Gulf Cooperation Council (GCC) Patent Office, the Patent Office confirms the start of the new 'outsourcing' model announced earlier in 2021 for new patent
Requirements And Procedure For Registration Of Trademarks In Nigeria
Pavestones Legal
Over the years, trademarks have gained prominence around the world as one of the most important intangible assets of any business. Trademarks play a crucial role in branding as they provide businesses and their products with a unique identity.
Intellectual Property In Nigeria: A Summary Of Protectable Rights In Nigeria
Olisa Agbakoba Legal (OAL)
Generally, Intellectual Property ("IP") covers products of intellectual creations. However, it can also mean a generic term that describes creations of the intellect concerning which the law ascribes the...
FREE News Alerts
Sign Up for our free News Alerts - All the latest articles on your chosen topics condensed into a free bi-weekly email.
Register For News Alerts
Article Tags
South Africa Intellectual Property Patent Trademark
Similar Articles
Powered by mondaq AI
MATCH
69%
Foreign IP Filings Into Africa Smit & Van Wyk
68%
Why It Is Important For Asian Companies To Protect Intellectual Property In Africa? Smit & Van Wyk
67%
Africa's Percent And The Digital Future Dennemeyer Group
65%
How The African Continental Free Trade Area Could Revolutionise IP In Africa Inventa
64%
Restoration And Optimism Dominate Africa IP Conversations Adams & Adams
Related Articles
Change In Assignment Requirements In South Africa Adams & Adams
Moral Of The Story Adams & Adams
Flying Under The Radar: What Are Stealth Trade Mark Applications? Adams & Adams
Where Is The Trade Secrets Rulebook? Inventa
Confusing Similarity – Little More Than A Crapshoot? ENSafrica
Mondaq Webinars
Considering the Nigerian Start-Up Act & The Opportunities for Tech
Oake Legal
A Guide for Business and Investors – The Sleeping Giant; Why is Nigeria the New Emerging Market for Global Business
Threshing Fields Law Practice
More Webinars
Comparative Guides
Dominance
Labour and Employment
More Guides
Mondaq Advice Centres
Global
Trademarks in SAARC Countries
More MACs
Upcoming Events
Mondaq Social Media