by Sophia Smallbones
Adams & Adams
Your LinkedIn Connections
with the authors

Maxe (Pty) Ltd instituted action proceedings against Artav Stainless Steel CC for infringement of several of its aesthetic design registrations covering sports bars and nudge bars for vehicles.  The trial took place in May 2020 and was the first trial concerning intellectual property to take place virtually in South Africa. 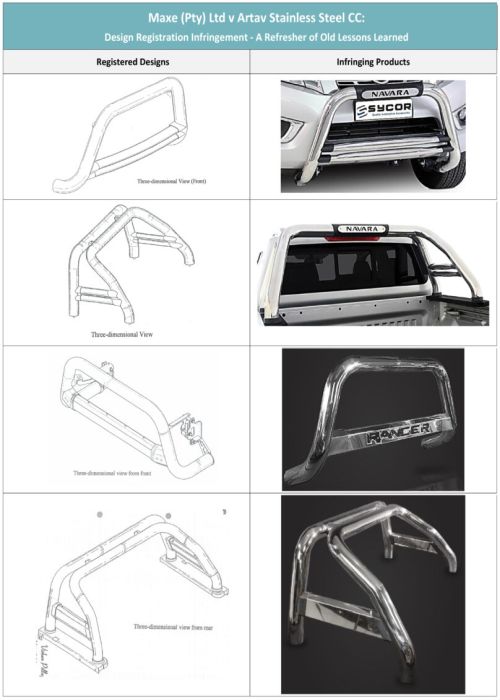 It was common cause that Maxe's designs were registered and valid and thus only infringement was in issue.  In its defence, Artav argued that both parties had been manufacturing, selling and distributing nudge bars and sport bars which had the same frame tubes or hoops but different crossbars, prior to Maxe applying for the registration of its designs, and that the shape and configuration of the hoops of Maxe's nudge bar and sport bar designs were similar to Maxe's prior designs which were commonly used and in the public domain to such an extent that the general shape of  Maxe's design registrations were generic and commonplace. Thus, the defence was that (i) the measure of novelty of Maxe's designs was small, (ii) the ambit of the monopoly of Maxe's design registration was small, and (iii) the differences which exists between the parties' respective nudge bar and sports bar designs were sufficiently substantial to avoid infringement.

Much was made in cross-examination of Maxe's expert witness of the differences between individual components of Maxe's designs and Artav's designs.  The court found that whilst many differences were conceded by Maxe's expert witness, his evidence was that one cannot look in isolation at each individual component - the design as a whole must be considered. If one does that, as a customer would, the differences between Maxe's and Artav's designs are negligible. The import of Maxe's expert witness evidence was also that whilst there were similarities in the design of the hoops prior to and after the priority date of the designs, the changes to the shape, width, height and positioning of it as a whole, together with the rest of the design, distinguished it from the prior art.  In re-examination, it was pointed out that when viewed holistically, none of the prior art designs relied on by Artav in cross-examination resembled Maxe's design.

The court also commented that some of the differences relied on by Artav in its arguments of non-infringement were only discernible by touch and, regarding one of the designs, the court stated they were virtually the same and differences required pointing out to be specifically noticeable.

There was a further dispute as to who the notional customer would be.  Maxe argued that a buyer of the sports or nudge bars would be an ordinary person with no specific knowledge of the particular item.  Artav, on the other hand, argued that the typical customer is likely to be a discerning customer and an enthusiast who is looking to acquire a "less than ordinary" vehicle and who is looking for something to compliment it.  The court found that the customer is the man-in-the-street who would purchase a specific vehicle because he either liked that brand or the look of the vehicle and who would purchase an accompanying accessory because it was available as part of the vehicle package or it was sold by the dealership. He would also not remember small nuances of whether the bars were round or oval, whether the joiners were individual or not, whether they were plastic or of another material, or whether they form part of the crossbar itself or not.

The court further noted that its impression of Artav's designs at the inspection in loco, was that they were so similar to Maxe's that without guidance from the parties' representatives it was very difficult to see the differences between the two.

Finally Artav's main thrust of evidence, and the main thrust of the argument, was that the court should only have regard to the crossbars between the hoops when assessing infringement. This is because, according to Artav, the hoops were somewhat standard and the joiners were primarily functional. However, the court found this argument to overlook a leading precedent case (Clipsal Australia (Pty) Ltd and Another v Trust Electrical Wholesalers and Another 2009 (3) SA 292 (SCA)) which specifically states that "the shape or configuration as a whole has to be considered". The court found that this essentially meant that the design should not be viewed in its individual parts - it must be considered as a whole and it is in that light which the differences and nuances are to be considered.  On this basis, the court found all but one of Maxe's design registrations to be infringed by Artav.

ARTICLE TAGS
South Africa Intellectual Property Patent Trademark
POPULAR ARTICLES ON: Intellectual Property from South Africa
The Legal Implications Of Sampling Music Under Nigerian Law
Banwo & Ighodalo
In 2019, Ajibola Muyiwa Danladi, popularly known as ‘Danny Young' brought copyright infringement proceedings against Tiwa Savage and her then record label, Mavin Records, on the grounds...
Intellectual Property In Nigeria: A Summary Of Protectable Rights In Nigeria
Olisa Agbakoba Legal (OAL)
Generally, Intellectual Property ("IP") covers products of intellectual creations. However, it can also mean a generic term that describes creations of the intellect concerning which the law ascribes the...
Requirements And Procedure For Registration Of Trademarks In Nigeria
Pavestones Legal
Over the years, trademarks have gained prominence around the world as one of the most important intangible assets of any business. Trademarks play a crucial role in branding as they provide businesses and their products with a unique identity.
Who Really Owns The "Machala" Song?
Perchstone & Graeys
The song ‘‘Machala'', performed by Oderhowo Joseph Efe; popularly known as Carter Efe, was released on 30th July 2022 in honour of the popular afro music star; ‘‘Wizkid''.
Registration Of A Patent In Nigeria
The Trusted Advisors
A patent is a license that confers its owner with the legal right for a limited period to make, use or sell an invention to the exclusion of others.
Nigeria Copyright Commission Signs MOU With Federal Airports Authority Of Nigeria To Combat Piracy At National Airports
Adams & Adams
The Director-General of Nigeria Copyright Commission ("NCC "), announced that it has signed a Memorandum of Understanding (MOU) with the Federal Airports Authority Of Nigeria ("FAAN")...
FREE News Alerts
Sign Up for our free News Alerts - All the latest articles on your chosen topics condensed into a free bi-weekly email.
Register For News Alerts
Article Tags
South Africa Intellectual Property Patent Trademark
Similar Articles
Powered by mondaq AI
MATCH
48%
Registered Designs: A Welcome Reminder ENSafrica
46%
How To Register Designs In South Africa Adams & Adams
45%
Functional Design Registrations | The Definitive Statement Is King Adams & Adams
44%
Design Law: A Welcome Reminder ENSafrica
42%
Chocolate Bar Brawls ENSafrica
Related Articles
Diving Into The Scope Of Conceptual Trademarks Inventa
Constitutional Court Looking Out For The Blind Barnard Inc.
Blind SA vs Minister Of Trade, Industry & Competition & Others Adams & Adams
ARIPO Ad Hoc Sub-Working Group On Geographical Indications Holds Second Meeting Adams & Adams
MMA Prohibits The Use Of Certain Words And Emblems Associated With The 2022 Rugby World Cup 7'S Adams & Adams
Mondaq Webinars
Employer Responsibilities and Employee Rights in Australia
People + Culture Strategies
Future Series: Managing the Risks of ESG Reporting and Compliance for In-House Counsel and Executives
Bennett Jones LLP
More Webinars
Comparative Guides
Dominance
Labour and Employment
Private Equity
More Guides
Mondaq Advice Centres
Global
Trademarks in SAARC Countries
More MACs