Exponential economic development across Africa has resulted in a greater necessity for increased protection of intellectual property ("IP") assets on the continent. Below, we consider the potential for investment in Africa, as well as the opportunities for IP activity on the continent.

Africa's growth momentum is expected to slow from 3.9% in 2018 to 4.1% in 2019. However, many African countries are forecast to grow above this average between 2018 and 2023, with 11 growing above 6%. Ethiopia is forecast to be the fastest-growing economy in Africa, averaging 8.2% for the next six years. Egypt, Nigeria and South Africa were the three largest markets in Africa in 2018, making up almost half of Africa's almost USD7-trillion market size1.

There are unique opportunities among the challenges in Africa, which contains about 10 of the 20 fastest growing economies in the world. The high rate of population growth and increase in spending power over the next 15 to 20 years makes Africa the continent from which global markets, customers and employees of the future are emerging.

Foreign direct investment ("FDI") flows into Africa have weakened in 2017 to USD42-billion, a 21% decline from the previous year. This fall was partially due to a 22% decrease in the value of cross-border M&A 2. Although it seems that Africa's rapid economic expansion that was predicted three to five years ago has not fully materialised due to various factors (including the contracted global economy, weak oil prices and severe droughts in many African countries), Africa is still primed for growth but at a slower rate of expansion than previously predicted, as countries around the world reconsider their long-term development strategies in light of the present global economic climate. Investment opportunities in Africa are plentiful but should be approached with careful planning and require resilience and determination on the part of the investor3.

The bulk of FDI into Africa comes from multinational enterprises in developed economies and developingeconomy investors from China, Singapore, India and Hong Kong. There is also significant inter-African investment, mostly from South African investors into other African countries.

Total FDI inflows to Africa decreased in 2016 compared to 2015, from USD61.5-million to USD59.4-million, whereas FDI outflows from Africa increased marginally in 2016 compared to 2015, from USD18-million to about USD18.2-million5. However, Chinese FDI to Africa has grown by 40% annually over the past ten years with Angola, Côte d'Ivoire, Ethiopia, Kenya, Nigeria, South Africa, Tanzania and Zambia making up around 50% of Chinese investment6. 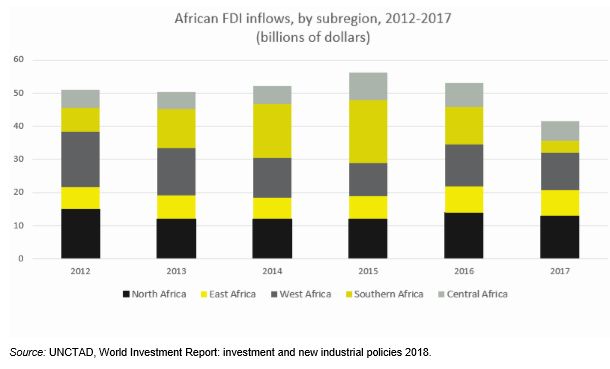 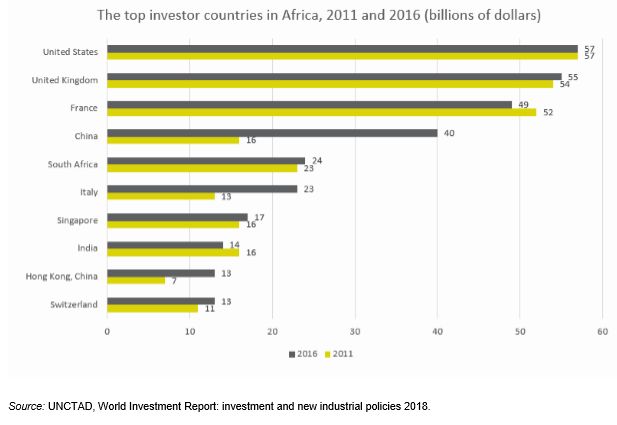 There is clearly a renewed interest in Africa with a number of heads of state visits to Africa in 2018, including by the UK's Theresa May, Germany's Angela Merkel, and China's Xi Jinping. The 2018 Forum on China Africa Cooperation (FOCAC) held in September 2018 in Beijing was attended by almost all African nations and President Xi Jinping pledged to invest USD60-billion in the African continent.