by Johannes A. Bürgi , Lukas Wyss and Thomas Müller
Walder Wyss Ltd.
0 Liked this Article
To print this article, all you need is to be registered or login on Mondaq.com.

The other Swiss auto lease ABS is a public term transaction of GE Money Bank AG with notes listed on the SIX Swiss Exchange (SIX). A portfolio of auto lease assets originated by GE was transferred to a newly set-up special purpose vehicle in Switzerland – Swiss Auto Lease 2012-1 GmbH (the 'Issuer'). The Issuer issued SFr200m asset-backed senior notes due in 2015 to the Swiss capital market. The two structures used can be summarised in Exhibit 1. 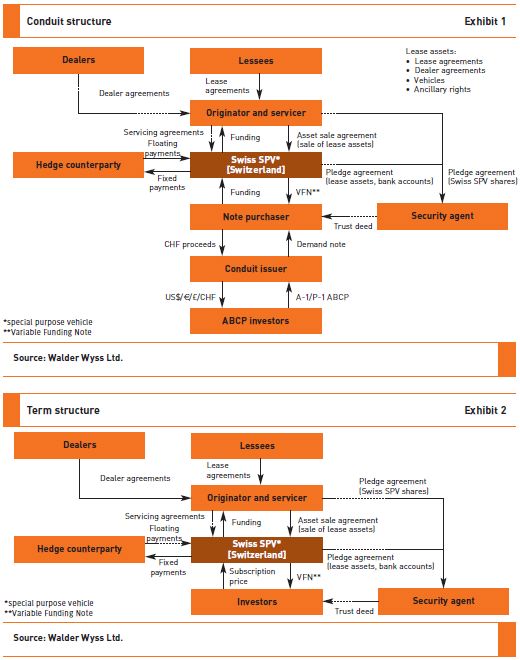 On the closing date, Swiss Credit Card Issuance No. 1 AG (the 'Issuer') used the proceeds from the issuance of the SFr370m asset-backed notes due in 2015 to acquire Issuer certificate No. 1 (ICN1). ICN1 is a secured limited-recourse note, entitling the Issuer to a share of the proceeds from receivables held by Swiss Payments Assets AG (the 'Asset special purpose vehicle' (SPV)) along with any investment proceeds on the amounts held in its accounts. The Asset SPV used the ICN1 proceeds to acquire receivables from the originators. The structure allows for issuance of further series. The Asset SPV can acquire further accounts during the revolving period from any originator designated as a selling originator. In consideration for the right to the receivables arising under the designated accounts, the Asset SPV will pay a purchase price to the originator equal to the principal purchase price and the initial and deferred finance charge purchase price. The structure used can be summarised in Exhibit 3. 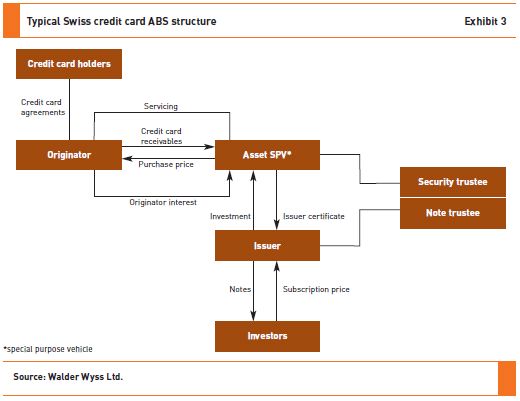 Existing and future receivables (e.g., receivables that have not yet come into existence and still must be earned) can both be validly assigned as a matter of Swiss law. However, in certain circumstances, such an approach presents a number of issues from a Swiss insolvency perspective. Also, Swiss VAT considerations will impact the structuring of such assignment as an assignment or sale of only the receivables could lead to the acceleration of Swiss VAT due on the underlying taxable supplies (e.g., future receivables).

This analysis would not appear to be problematic for most asset categories as the transaction would only fund the sale and purchase of receivables once they came into existence. This appears to be the case for credit card securitisations (with some few exceptions), trade receivables securitisation and mortgage loans securitisations.

Future receivables under the lease agreements

However, the analysis is problematic in relation to lease agreements as the transaction would fund the lease instalments to be paid during the term of the underlying lease agreement and the Swiss Federal Supreme Court ruling suggests that rental streams are likely to be characterised as future receivables. While a lease is not a rental agreement per se, Swiss jurisprudence indicates that leases are regarded as close cousins to rentals and the courts regularly look to tenancy law provisions in cases concerning the rights and obligations of lessees (especially with respect to any protective measures for the benefit of the lessees). This analysis would have to be done on a case by case basis by carefully assessing the underlying sample agreements.

Given that future instalments under lease agreements risk being characterised as 'future receivables' which would not escape the insolvency estate of the assignor, it can be anticipated that a sale of the lease receivables only may have a detrimental impact on the quantum of debt available at the desired rating of the notes to be issued under the transaction.

In order to address the concerns in relation to the assignment of (future) lease receivables, most recent Swiss auto lease securitisation transactions provided for a transfer of the entire lease agreements and the vehicles to the SPV (by way of transfer and assumption of agreement (Vertragsübertragung/Vertragsübernahme)) rather than just the assignment of the receivables. As a consequence, future receivables would arise (originally) with the SPV regardless of any insolvency in relation to the originator. In order to avoid contractual obligations of the SPV, lease agreements are to be transferred only once the lease vehicles have been properly delivered to the lessor, the lease agreements are no longer subject to any right of withdrawal under the Swiss credit consumer act (if applicable) and the lessor has paid a certain number of instalments under the lease agreement.

Under Swiss substantive law, the SPV as assignee in relation to the receivables only acquires the same rights as the originator as the assignor possesses. In particular all defences to the receivables available to a customer may be exercised by that customer also against the SPV if they were already in existence at the time when the customer obtained knowledge of the assignment and if a counterclaim of the relevant customer was not yet due at this time, the customer may set off the counterclaim if it does not become due later than the assigned receivable. Also, in circumstances where the Swiss Credit Consumer Act is applicable, additional considerations would have to be addressed in the documentation.

Preferably, the underlying agreements do contain a waiver of set-off and in situations where an obligor may have an independent claim against the originator, such as a bank depositor in the case of a mortgage loan or credit card securitisation, such waiver would even become more relevant.

The structural key elements for making the SPV bankruptcy remote are not very different from international standards and include, inter alia, (i) restrictions on its corporate purpose (Gesellschaftszweck) as reflected in its articles of incorporation; (ii) restrictive covenants in the transaction documents; (iii) restriction on hiring any employees; (iv) existence of independent directors that are not affiliated with the originator; and (v) provisions to all agreements containing limited recourse and non-petition clauses which are basically enforceable under Swiss law.

Also, in recent transactions, the SPVs were solely owned by independent shareholders that were not associated with the originator. It must be noted that there are no real orphan structures under Swiss law as known in other jurisdictions. In transactions where the SPV was to be held by the originator and to the extent that rating agencies did not get comfortable otherwise, golden share concepts have been introduced.

The Swiss legal and regulatory environment for the issuance of any debt securities (including ABS) is favourable from an issuer's point of view. Debt securities not listed on the SIX but publicly offered in Switzerland can be offered on the basis of an issue prospectus only. The issue prospectus has to comply with the disclosure requirements under the Swiss Code of Obligations (CO) but will neither have to be registered nor approved by any regulatory authority. The disclosure requirements under the CO are basically limited to general information of the issuer and the terms and conditions of the notes.

In the event of a private placement of debt securities in Switzerland, the issuer does not have to prepare an issue prospect or any other offering documents.

If (Swiss law governed) debt securities are issued directly or indirectly by public offer under uniform loan terms by an issuer domiciled or having a business establishment in Switzerland, the bondholders will form a community of bondholders.

Regardless of the existence of a community of bondholders, each bondholder is entitled to independently exercise its rights against the issuer, except where:

If a representative is to be appointed, this appointment can be made either in accordance with the terms and conditions of a bond issue or by the bondholders' meeting, depending on applicable legal provisions.

The bondholder provisions under Swiss law will have to be considered while structuring the ABS transaction and it is advisable to reflect them in the terms and conditions of the notes.

Listing of ABS on the SIX

Publicly offered securities linked to Swiss (or foreign) assets can be listed on the SIX in Zurich, the main debt exchange in Switzerland. The listing proceedings for ABS follow the general rules for the listing of debt securities set out in the SIX listing rules and the various additional guidelines. SIX is currently considering passing a special regulatory standard for the listing of ABS but no draft regulations have been published yet (back in 1998, SIX published a booklet on the listing of ABS that supplemented the standard listing rules for debt securities – the booklet may still be consulted but no longer forms part of the applicable SIX regulations in force).

The listing process before the SIX is not burdensome and can be divided in the following four steps:

Phase one: For ABS transactions, it is advisable to obtain a preliminary decision from the SIX Regulatory Board on the compliance of the draft prospectus with the SIX listing rules. SIX requires a catalogue of additional information which will have to be included into the listing prospectus compared to the requirements of a mere issue prospectus but which do not derive from the international standard. The said process takes up to at least 20 trading days and ends with a confirmation from the SIX Regulatory Board that the prospectus would be compliant with the listing rules. Parallel to this proceeding, the issuer will have to be approved and recognised by the SIX as new issuer. An issuer can be established as either a (Swiss or foreign) stock corporation or as limited liability company and has to follow the required accounting standards of SIX. A Swiss issuer will have to comply with International Financial Reporting Standards (IFRS), Generally Accepted Accounting Principles (US GAAP), Swiss Accounting and Reporting Principles (Swiss GAAP FER) or even the accounting standards stipulated in the Swiss Banking Act. Issuers that are not incorporated in Switzerland may even apply the accounting standards of their home country, provided that these standards are recognised by the SIX Regulatory Board.

Phase four: The SIX Regulatory Board reviews the written listing request and attachments and approves the listing. Once approved, the securities are definitively listed.

During the listing of the ABS on the SIX, the issuer will have to comply with the general (disclosure) requirements for maintaining the listing under the SIX listing rules (which do not derogate from international standards). In addition, SIX requires for ABS transactions only that reports on the portfolio are being made publicly available on a regular basis (on the issuer's website). It is noteworthy that SIX is currently reviewing whether further disclosure rules should apply for ABS. It can therefore not be excluded that additional listing rules will have to be followed for ABS transactions in the future which we would however expect to follow international standards (i.e., the recently published 'The International Organization of Securities Commission's (IOSCO) principles for ongoing disclosure for ABS').

Without going into any further detail in this article, there are a number of Swiss tax considerations to be taken into account when structuring a Swiss ABS including corporate income and equity capital tax at the Swiss SPV level, Swiss withholding tax on interest payments and VAT. Generally, tax ruling confirmations can be sought from competent Swiss tax authorities at both the Cantonal and the Federal level to confirm tax treatment of the transactions in question in advance. From a VAT perspective, the Swiss Federal Tax Administration typically treats securitisation transactions as mere financing transactions with no VAT consequences. However, there may be some VAT leakage on any fees payable by the Swiss SPV (such as servicing fees, if any).

The Swiss ABS market has seen a number of interesting new transactions securitising new asset classes in Switzerland and there are a number of additional transactions said to be in the pipeline to come to market in the near future. Structured finance is currently having a strong comeback in Switzerland. The more stringent capital adequacy requirements will further stimulate banks to reduce the risk-weighted assets (RWA) on their balance sheet and will make bank funding more costly for borrowers.