Saudi Arabia: Will KSA Lead The Region On Insurance Reform?

by Raymond Hurley
PWC
To print this article, all you need is to be registered or login on Mondaq.com.

Industry and market commentators have long predicted a wave of consolidation in the Kingdom of Saudi Arabia's (KSA) insurance sector. Since the Law on Supervision of Cooperative Insurance Companies (enacted in FY03), the KSA insurance market has seen an influx of new insurers entering the market (35 licenced insurers today). The number of new entrants over such a short period has led to a 'fragmented' market characterised by intense price competition and capital erosion for many stakeholders. Whilst this might be good for consumers, it poses real challenges for insurance companies who have invested in the KSA. The introduction of compulsory insurance (e.g. motor and health) did create optimism amongst shareholders and insurers, but for many, it has not yet delivered the profitable growth they anticipated.

The KSA insurance market is highly fragmented with three out of the 35 insurance companies generating 53% of GWP (Gross Written Premium) in FY14 - the smallest 10 companies share less than 5% of the market. This disparity is not sustainable for the industry, with many smaller companies unable to achieve the scale required to generate a profit. This has led to insurers competing on price, rather than service. With demand for insurance products mostly made up of compulsory lines, where competition has pushed down pricing, some insurers are unable to balance their portfolio with other more profitable lines.

The haves and the have-nots

So, despite certain structural reforms that have taken place, value continues to be eroded. In FY14, 10 out of the 35 listed insurance companies approached the Saudi Arabian Capital Market Authority (CMA) for a capital increase, a clear sign that the sector continues to deplete capital. 13 out of 35 companies reported a loss in FY14, resulting in an aggregate loss of SAR0.5bn in FY14 (FY13 saw 21 out of 35 companies reporting losses, resulting in a combined loss of SAR1.65bn).

Whilst the insurance industry as a whole returned to profitability in FY14 (an estimated reported total net income of SAR853m vs. an aggregate loss of SAR1.3bn in FY13), the gap between the top three and smaller 'tail' of insurers has widened. Smaller players (defined as those with a market share of less than 1%) have continued to experience losses and lost market share between FY11 and FY14 (8.9% to 7.4%) to larger players, a gloomy cycle of demise for sub-scale businesses. 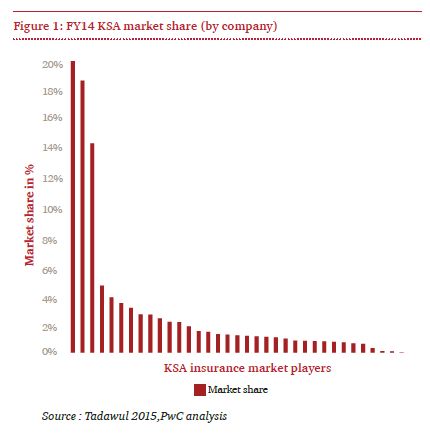 Attractive market outlook for those that can survive

KSA is forecast to be one of the fastest growing insurance markets globally. Whilst the insurance market in KSA is still very much at an early stage of its development, with profitability far from certain for many, the overall market outlook for the sector still remains attractive for those able to reach critical mass.

GWP is set to continue to grow at 7.05% CAGR (Compound Annual Growth Rate) year on year to FY18 (Figure 2), supported by solid demographics and the expectation of maturing penetration rates. Penetration rates (measured as a % of GDP) are currently the lowest in the world with 0.87 % for non-life in FY13, compared with an average of 3.1% for non-life in more mature markets, such as Europe. 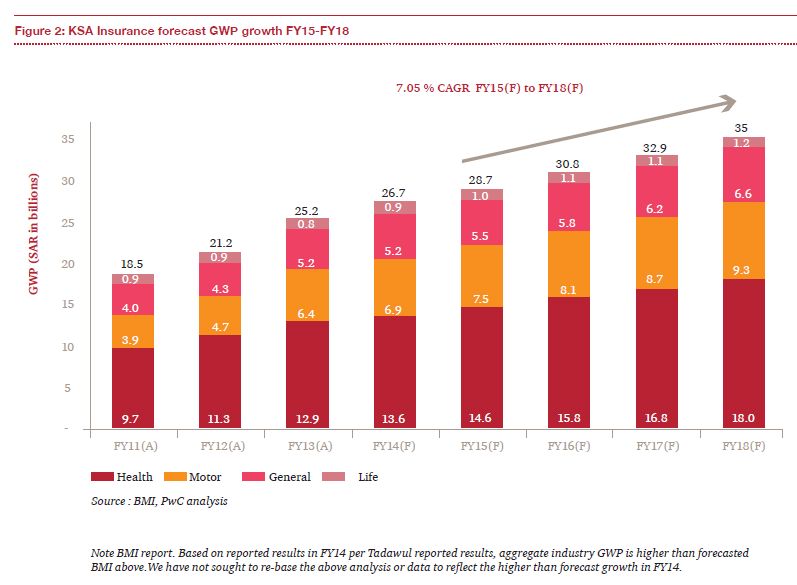 Is FY15 the year in which we might see consolidation in the KSA insurance market? With one-third of KSA insurers reporting further losses in FY14, the sustainability of the market's existing competitive dynamics is fragile. Some market participants won't survive the race to scale, or at best will continue to erode capital, lose the confidence of investors and regulators and increasingly put policyholder protection at risk. With the regulator taking a harder stance on technical underwriting, reserving and solvency requirements, this may inevitably build pressure and drive the building momentum for consolidation.

In FY13, SAMA (Saudi Arabian Monetary Authority) implemented mandatory risk based pricing measures for motor and health, aligning pricing with independent actuaries' assessments. The expectation is that this will limit price competition, and eventually lead to a more balanced range of options and quality of service for policyholders. With FY14 being the first full year this measure has been implemented, our expectation is that FY15 will see a number of insurers (particularly those with larger loss ratios) being priced out of the motor and health market. This will place pressure on business models whose cost base is not configured for risk based pricing. The continued requests of insurers to their shareholders and the CMA for capital increases (10 entities applied for a capital increase in FY14) maybe partly attributable to this development.

Fit for the future?

The large regional and global insurers that already have a foothold in KSA are positioned well to thrive and take advantage of the anticipated market growth. These large players have for example, critical mass, appropriate systems, a diversified distribution network and skilled underwriting teams to manage risk.

Movers and shakers in M&A

Existing foreign insurers (typically the global majors) in the region and aspiring entrants remain poised to take advantage of the right investment opportunities that would give them access to the key growth markets such as KSA. While some have made successful acquisitions and investments in 2013, M&A activity in FY14 appears to have been subdued. Expectation gaps around valuations, poor quality portfolios, unwillingness to forego control by family owned insurers and restrictive upper limits on foreign ownership are some of the factors that are cited for the lack of M&A activity. Whilst many of these factors may persist in the short to medium term, a more proactive intervention by the regulator could help create the right environment for more consolidation and M&A deals to come to the market.

Those insurers that haven't managed to achieve scale will need to enhance their risk-based pricing models to ensure sustainable underwriting and a path to profitability in order to maintain stakeholder support. A focus on improving underwriting processes, loss ratios and expense ratios will be essential to survival. Those that can make this work may be more attractive for foreign insurers looking to gain market share, and therefore maximise value for shareholders. Our analysis (Figure 3) suggests that several smaller insurers have been able to do this (top-right hand side of chart below), demonstrating GWP growth (FY11-FY14) and achieving positive ROE (Return on Equity) for their shareholders in FY14.

There will however be those insurers that are either unable (or unwilling) to participate in M&A, or those that aren't able to manage risk appropriately. Over the medium term, this will inevitably have an impact particularly for smaller insurers' susceptibility to adverse selection of poorer quality underwriting risks. 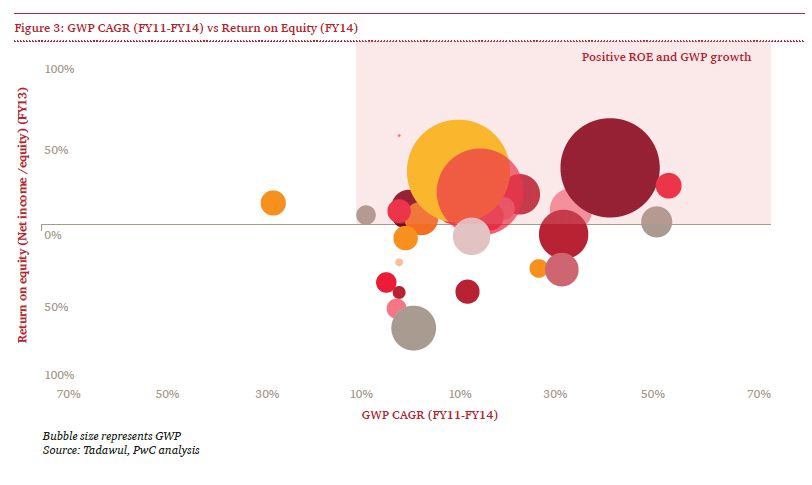 For several smaller to medium sized or family owned insurers, traditional M&A may not be a viable or attractive option. Those unable (or unwilling) to consolidate or shore up their capital, may need to look at alternatives. Assessing individual lines of business and segregating profitable and unprofitable businesses may help preserve existing capital. Non-profitable lines could be sold via a portfolio transfer or novation, giving an immediate release of capital and certainty on otherwise risky future obligations.

Running off particular lines of business in a managed process may provide an alternative to those looking to exit in part or as a whole, where a transfer is not possible. Management teams, with the support of their investors need to re-assess business cases and make tough decisions on which lines they will continue and which lines they may choose to exit. An orderly run-off (in part or in whole) may provide a win-win alternative to traditional M&A: the interests of policyholders are protected; regulators maintain the orderly functioning of the market; and shareholders are given the best chance of value being maximised.

If planned properly as part of a holistic restructuring assessment, a managed run-off may provide the policyholders and investors with a more certain outcome than other alternatives. Turning off less attractive or less profitable lines should discontinue old cycles of reckless pricing and enable those players who are better placed to assess and price underwriting risk, to do so profitably. Over the longer term, this should also lead to a more robust and eventually a more service driven sector.

Regulation plays a critical part, but companies need to be proactive

As the authority with responsibility for setting insurance regulation and governance in KSA, SAMA has shown its ability and willingness to take interventionist action when required. The regulator's focus may now need to turn to supporting the consolidation thesis – whether this is through putting in place regulatory measures to compel M&A combinations or alternatively using regulatory inspections and oblige management teams to assess the long term viability of certain business models. Increased pressure in this area could be a catalyst for reform – either in the form of traditional M&A or alternative options such as a managed run-off.

Companies however also need to play their part. They need to take a closer look at their cost structures and risk based pricing models as well as underwriting processes to ensure they remain competitive whilst maximising (and protecting) shareholder value. For those looking to exit, sellers need realistic pricing expectations - holding out has proven costly for some players in terms of capital value erosion. The bid/ask gap that has held back some deals to date, may need to narrow.

Alternatives to standard M&A should also be seriously considered. Insurers need to perform an honest evaluation of the business they are writing, and take hard (but needed) decisions on their future strategy in order to maximize value for their stakeholders, and in particular continue to protect policyholders and maximize shareholder value.