After a period of draught, trainee intake at Iberia's leading firms is on the up once again as workloads increase

Growing workloads in Spain and Portugal resulted in an increase in the intake of trainees at leading Iberian law firms in 2015. Data supplied by the major firms in the two countries showed that trainee intake grew by up to 86 per cent in Spain, while some of the leading firms in Portugal almost tripled their trainee intake in the last 12 months.

Uría Menéndez attributed the growth in trainee intake to the "increase in activity" since 2014. Similarly, Baker & McKenzie said it upped its number of trainees in the last year due to the improvement in Spain's economy and the subsequent "notable increase in office workload". Though Pérez-Llorca took fewer trainees in 2015, it says its intake in 2014 was particularly high due to an increase in work volume.

Trainee intake has grown at most of the major firms in Spain during the last 12 months despite the fact that the requirements for achieving the status of "abogado" recently changed. It used to be the case that law graduates were able to practice as lawyers upon finishing their degree, but under the new system, trainees must complete an internship at a law firm for at least four months as part of a master's degree (Master de Acceso a la Abogacía).

Baker & McKenzie says the new requirement to complete a master's degree to become a lawyer could explain why – despite their own increase in trainee intake in 2015 – the longer term trend is more likely to be declining trainee numbers. "The number of trainees has decreased substantially compared with the old graduates in law," says a firm spokeswoman. She adds that this could be for a number of reasons, including the possibility that not all law students choose to do the legal profession access master´s, or the fact that there are fewer places available on the master´s course than there are on law degree courses.

Law firms in Portugal also upped their intake of trainees in 2015 due to increases in work volume. Vieira de Almeida (VdA) took on more than twice as many trainees last year as it did in 2014. The firm's corporate services director, Susana Almeida Lopes, says this was due to the fact that the firm integrated 30 lawyers from Lisbon firm Miranda: "VdA added oil and gas as a practice area and expanded the firm's reach to nine new jurisdictions."

Portuguese law firms report that they are receiving a growing number of applications for trainee positions, and also an increasing amount of female applicants. A spokesman for Cuatrecasas, Gonçalves Pereira says: "In Portugal, we have seen a substantial increase in the number of female internship applicants consistent with the greater number of female students in Portuguese universities."

Almeida Lopes says: "Every year we receive more applications, which are not restricted to Portuguese graduate students, but also students attending graduate studies abroad – we don´t notice any difference regarding the gender of the applicants but rather their nationality, with an increasing number of international applicants."

Other firms attribute the increase in the number of applications they receive to having a higher profile in the market. A Linklaters spokesman says the firm has more applications because it is "more well-known to law students in Spain".

Similarly, another law firm has sought to offset what it sees as the possible decline in applicants due to the new requirements for entrance to the legal profession by ensuring a "greater presence" at target universities. 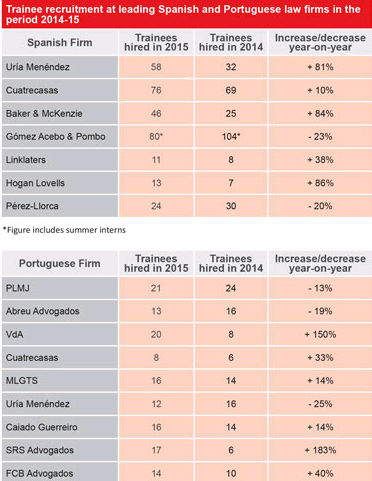 Before the reforms in Spain, there were concerns of rising costs if law firms paid for the new masters' programme. Most top firms are sponsoring some recruits.

Baker & McKenzie, for example, provides funding to students through a number of initiatives. Through its "Baker Alumni UC3M" scheme, the firm finances the studies of law students with "excellent academic results, but low income", while it also provides a scholarship of €6,000 to a Master of ICADE (Universidad Pontificia de Comillas) student with excellent academic results who has gone through a selection process. In addition, the law firm awards scholarships to students at public universities where it participates as a member of the advisory board, namely Universidad Carlos III de Madrid and Universidad Autónoma de Madrid.

Meanwhile, Uría Menéndez is prepared "in exceptional cases, to sponsor excellent students who need financial assistance to carry out their law studies", a firm spokesperson says.

Linklaters says it provides six 'Master de Acceso a la Abogacía' grants to outstanding students from "underprivileged" backgrounds, while Pérez-Llorca offers two types of sponsorship related to the master's: business sponsorships whereby the firm donates money to universities to support the master's and excellence sponsorships where the firm selects top students and sponsors their studies (the student completes their internship at Pérez-Llorca).

With the majority of leading law firms in Spain and Portugal increasing their intake of trainees in the last year, the signs are that increasing workloads are creating more opportunities for younger law graduates who want to embark on a career in a law firm. This is welcome news for law firms and students alike as "the battle for talent" appears to be starting again.

ARTICLE TAGS
Hungary Law Practice Management Recruiting
POPULAR ARTICLES ON: Law Practice Management from European Union
Changes In Technology
lus Laboris
To quote Nicola Millard, principal innovation partner at BT and until recently its resident futurologist: "The future of work is digital, but HR's role is to have more of an experimental mindset."
Changing Status From Administrative To Transformational
lus Laboris
The post-pandemic world is undoubtedly characterised as "VUCA", with volatility, uncertainty, complexity and ambiguity.
Changes In Talent And Retention: The Biggest Business Challenge
lus Laboris
Just a few years ago, complex workplace concepts such as holacracy, a system of self-organisation where hierarchy is non-existent and people are paired with projects based on their skills rather than job titles, was the preserve of academic debate.
ESMA Recommendations To CySEC
AGP Law Firm | A.G. Paphitis & Co. LLC
For the first time in its history ESMA, pursuant to Article 16(1) of the ESMA Regulation and in accordance with Article 30(4) of the ESMA Regulation, has issued two specific recommendations to CySEC.
France Passes Groundbreaking "Climate Law" That Includes Labour-law Consequences
L&E Global
The groundbreaking Climate Law adopted at the end of August 2021 contains provisions that modify certain human resources management practices:
BDBF'S 2021 Roadmap For HR
Brahams Dutt Badrick French LLP
On 25 January 2021, we held a webinar looking at the top 10 things for employers to know about in 2021. Here you can access the BDBF 2021 Roadmap for HR,...
FREE News Alerts
Sign Up for our free News Alerts - All the latest articles on your chosen topics condensed into a free bi-weekly email.
Register For News Alerts
Article Tags
Hungary Law Practice Management Recruiting
Mondaq Webinars
The New Swiss Data Protection Act - What You Need To Know
FABIAN PRIVACY LEGAL GmbH
Navigating the AI Legal Landscape
INQ Law
More Webinars
Comparative Guides
FinTech
International Arbitration
Litigation Dispute Resolution
More Guides
Mondaq Advice Centres
Global
Trademarks in SAARC Countries
More MACs
Upcoming Events
Mondaq Social Media