United States: A Discussion With Stacey Abrams: The 100th Anniversary Of The 19th Amendment And Where We Are Today

On February 11, in honor of Black History Month, MoFo partners, staff, clients, and friends welcomed Stacey Abrams, former minority leader in the Georgia state legislature and the 2018 Democratic candidate for Georgia governor to our New York office. MoFo's Diversity Strategy and Black History Month Committees jointly hosted the event titled "The 100th Anniversary of the 19th Amendment and Where We Are Today."

Stacey delivered her speech addressing this year's Black History Month theme, "African Americans and the Vote," to a 180-person live audience in New York and more than 200 people viewing a live broadcast of the presentation from MoFo's U.S. offices.

Stacey began by recalling a story her grandmother told about her first opportunity to vote, which was in the 1968 election, three years after President Lyndon Johnson had signed the Voting Rights Act in 1965, which outlawed the discriminatory voting practices and prerequisites that many southern states adopted after the Civil War.

Her grandmother explained that the first time she was afforded the right to vote in Mississippi, she almost didn't exercise it—because she was afraid. Stacey's grandmother could remember "paying bail for her son, [Stacey's] father, when he was 14 or 15 after he was arrested for registering people to vote," Stacey recounted. With memories of Jim Crow laws and fire hoses aimed at protesters still vivid in her mind, Stacey's grandmother couldn't imagine a trip to the ballot box that wouldn't involve violence.

Thankfully, Stacey's grandfather was able to convince his wife to go out with him and vote that day. And Stacey's account of the story drove home one of her presentation's main points: "I celebrate the 19th Amendment as a woman and the 15th Amendment as a person of color," she said. "We can adopt all the Constitutional Amendments we want," she continued, but as long as the states have considerable discretion to establish qualifications for suffrage, "that right is ephemeral."

Stacey's grandmother's experience exemplifies this point. Her first opportunity to vote was in the 1968 election despite the fact that the 19th Amendment, which gives women the right to vote, was passed in 1920. "[D]iscriminatory Jim Crow laws, coupled with a resurgent and violent Ku Klux Klan, had a firm grip in the Southern states. African-American women in the Deep South could no more exercise their right to vote in 1920 than African-American men after the passage of the 15th Amendment in 1870," according to the Southern Poverty Law Center.

Stacey went on to describe a few modern state qualifications on suffrage, some or all of which might have cost her the 2018 gubernatorial race in Georgia despite the fact that she won more votes in that election than any other Democrat in the state's history.

For one thing, Georgia is one of at least nine states with a "use it or lose it" policy, providing that citizens can be removed from the voter registration list for not voting in past elections or failing to respond to notices mailed by the state. In July 2017, at least 107,000 people were removed from Georgia's voter polls because of that policy.

Stacey described other elements that likely impeded the suffrage rights of people of color during the 2018 gubernatorial race, including Georgia's "exact match" law and attempts to suppress the black vote, including closing polling places in predominantly black counties.

In the Q&A session with MoFo partner Mark Whitaker that followed, Stacey explained why she categorized her speech announcing that Republican Brian Kemp will be Georgia's next governor as a "non-concession speech."

"Election Day was November 6. By election night, the Associated Press could not call the election because of the number of reports of voter suppression," Stacey explained.

"We had a voter hotline, and during the course of early voting, through Election Day and beyond, we received more than 80,000 phone calls from people who experienced voter suppression."

And so Stacey decided to fight until every vote was counted.

Over the ten days following the election, Stacey's campaign, in coalition with several groups, filed a number of lawsuits over the alleged illegality of the voting conditions in many precincts, winning almost every one.

Nevertheless, Stacey explains, "In Georgia, you have to prove with nearly empirical certainty that you would have won, which is nearly an impossible standard to me."

In light of circumstances, the closest she could come to bringing closure to the election while preserving her integrity and her responsibility to her voters was to acknowledge the legal sufficiency of the outcome while stating that the system is not legitimate.

Stacey's Ambitions for the Future

Despite the seriousness of her main topic, Stacey managed to keep her rapt audience inspired and laughing, even describing the breakup with a college sweetheart that precipitated her creation of a list of goals—something she maintains to this day.

"I walked across the Spellman College campus to the computer lab at around one in the morning and I opened up Lotus 1-2-3, which I used to create a spreadsheet listing all of my ambitions, all of the things I was going to accomplish to prove him wrong."

As the first black woman to become the gubernatorial nominee for a major party in the United States; a graduate of Yale Law School; and the author of several books, including Lead from the Outside, copies of which Stacey signed for her MoFo audience; it's safe to say Stacey has a achieved at least some of the lofty aspirations she's logged onto her list.

In the wake of the gubernatorial race in Georgia, Stacey launched two organizations to try to combat the voter suppression she witnessed.

"One is called Fair Fight 2020. That represents our work in 18 states to ensure we have fair votes across the country in 2020. If you would like to help, go to https://fairfight.com/fair-fight-2020/ and sign up," Stacey urged the audience. "We will assign you a responsibility. We might, for example, ask you to phone bank to a state that needs support."

She did emphasize, however, that "if you live in a state that faces voter suppression, one of the most effective things you can do is volunteer to be a poll worker. The more people we have who understand the legal implications of voter laws, the better the election process is for all."

Her second organization, Fair Count, works to ensure people are counted and redistricting is fair. "Just as important to fair elections as fighting voter suppression is the accuracy of the 2020 Census. We are working to ensure that hard-to-count communities in every state accurately will be included in the 2020 Census."

Stacey recently added a particularly ambitious goal to her list of aspirations, and she's not shy about sharing it: There might be a U.S. Presidential or Vice Presidental run in her future.

"It's important to broadcast your ambitions," she said. 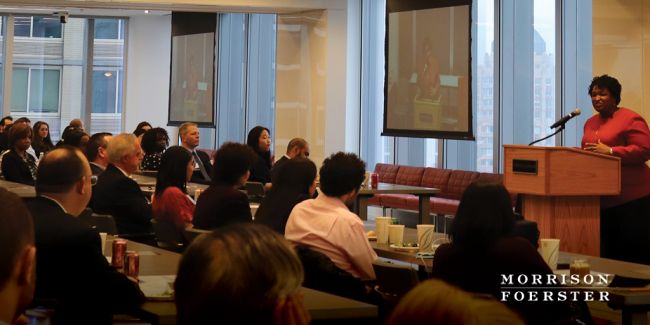 Stacey delivered her speech to 180 MoFo partners, staff, clients, and friends in our New York office. 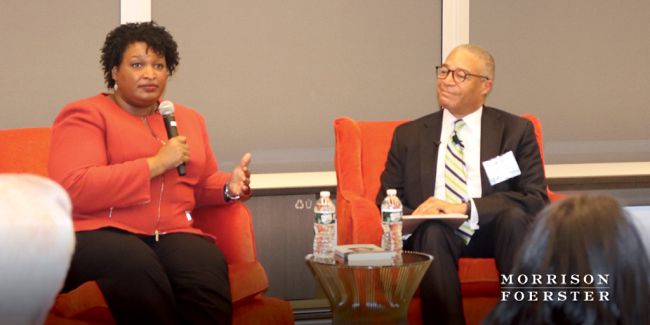 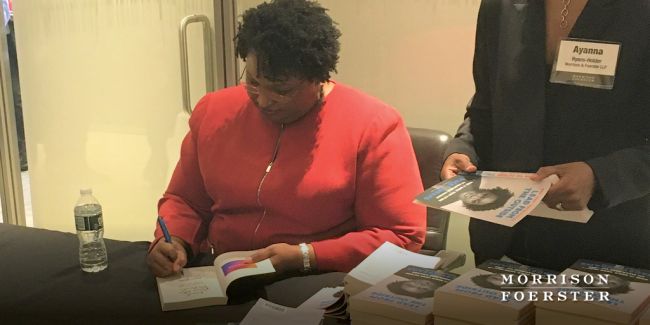 Guests enjoyed a book signing of Stacey's Lead from the Outside.