by Cecilia Delgado
Payet, Rey, Cauvi, Perez Abogados
To print this article, all you need is to be registered or login on Mondaq.com.

The solid and stable economic position recently earned by Peru, as a result of the economic stabilization and structural reform process applied in the early ‘90s, and the implementation and execution of an adequate legal framework that strengthened the respect, guarantee and protection of investments, were determining factors for the creation of an appropriate climate for investment.

In addition, the Peruvian Government has adopted a free market economic regime, understanding that the private sector can collect capital more efficiently and administrate its resources more efficiently than the public sector. Thus, according to article 60 of our Constitution the State may carry on business activity if expressly authorized by law and only in cases of high public interest or clear national convenience, and if no private individual or entity is interested in carrying on said investment. The State is, therefore, basically limited to devote its resources to essential social and regulatory functions.

As a consequence of the above, the Peruvian government is continuing in its effort to attract the inflow of foreign capital by bringing down the possible barriers to inbound investment.

Its main premises are an equal treatment to foreign investors, an unrestricted access to the majority of economic sectors, the non-imposition of performance requirements, the free transfer of capital and competition; the guarantee of private property, and freedom to acquire shares from nationals, to access to internal credit and to pay royalties.

Since investors are not impermeable to taxes, Peru has included tax mechanisms in order to make our economy more attractive to capital inflows, among which we can mention1:

Peru has signed Conventions to avoid double taxation with the Andean Community2, Sweden, Chile and Canada; and currently is negotiating with various other countries in order to sign more treaties.

It is clear that countries like Peru, in which the political and economical regimes have proven to be unstable and, therefore, investments imply a greater degree of risk, need to provide investors with legal mechanisms that create a climate of legal certainty and confidence.

Probably the most useful instrument for purposes of reducing the aforementioned political risk is the execution of legal stabilization agreements between the State and private individuals or entities under which both parties agree to "freeze" the basic rules and regulations (including certain tax rules) in force at the moment the agreement is entered into, i.e. they will continue to apply during the term of the agreement, regardless of any modification to the legislation that has been stabilized. Said agreements may not be unilaterally modified by the State, thus allowing the investors to foresee the rules that will govern their investment during a reasonable term.

Changes in legislation will not affect investors or the enterprise receiving the investment for ten (10) years. In case of concessions regarding public works of infrastructure and utilities, the term is subject to the life of the agreement, with a maximum of sixty (60) years. In addition, there are several guarantees granted by the State to investors as well as to the enterprise receiving the investment.

Stability granted by the State to investors:

Stability granted by the State to the enterprise receiving the investment:

Despite the above mentioned, at some point the stabilization of the tax regime through these agreements was criticized since it was said to represent an obstacle to the Tax Administration, i.e. considering the constant changes in the tax legislation it originates the existence of a great variety of effective tax regimes in a single moment of time. For this reason, not so long ago, the Tax Administration intended to indirectly disregard the effect of these agreements.

For instance, last year the Tax Administration disregarded the tax stability agreements executed with several taxpayers. Fortunately, in most cases, the enforceability of these agreements has been ratified and investor’s confidence in the Peruvian legal system has been restored.

In addition, in similar cases involving several utility and mining companies3, these taxpayers benefited from a law that granted tax consequences to the reappraisal amount of assets within a merger or spin-off process. This benefit implied that by a mere appraisal of assets, the depreciation basis could significantly increase and so the tax shield. As the tax collection alarmingly started to drop, the government passed a law that eliminated the said benefit. The Tax Administration argued that the benefit was not stabilized while taxpayers alleged that the benefit still applied to them since they were protected by their stability agreements. An arbitral decision confirmed that the stability agreement’s scope of application comprised the Income Tax Laws, including the law that granted the benefit. Notwithstanding, it did not analyze the tax/technical controversy since this duty corresponded to the Tax Authorities. On the other hand, the Tax Administration changed its strategy. For instance, in one of the utility companies’ cases it alleged the substance over form principle so as to support that the spin-off did not really take place (i.e. it only took place "formally") and that the only purpose of the reorganization process was to obtain a tax benefit. Notwithstanding, the Tax Court shared the taxpayer’s position and ruled that the spin-off effectively took place.4

It is also worth to mention that there is only one case in which an investor requested arbitration against the Republic of Peru pursuant to an arbitration clause contained in a Legal Stabilization Investment Agreement, under the auspices of the International Centre for the Settlement of Investment Disputes "ICSID"5. The investor’s claim arose out of certain tax assessments by the Peruvian Government to a previously state-owned utility, subsequent to the investor’s acquisition of such utility company; hence, negatively affecting the investor’s stabilized rights to receive after-tax profits from its investment in Peru. The ICSID has not ruled the case yet.

As mentioned before, the combination of economic stability, legal framework and sectorial investment opportunities has made investment in Peru boast since the last decade. According to the information declared to the Peruvian Private Investment Promotion Agency (PROINVERSION) as of September 2004 the foreign direct investment in our country totals US$12,896 million, stock that has consistently grown on an annual basis. 6 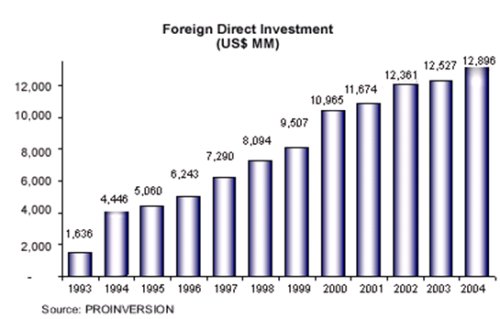 Public information available at PROINVERSION web site state that the areas concentrating most of the FDI stock are telecommunications (28.88%), industry (14.48%) and finances (14.34%) 7

So as to attract foreign investments in the areas of public works and services, the Peruvian Government has set a target of 7% growing rate in order to increase the investment in infrastructure. The greater investment in infrastructure and public services should help to transform our economy and make it more competitive. In connection to this, on January 22, 2005, the Peruvian Minister of Economics and Finance publicly stated8:

Other important projects are those related to the regional airports, which involves promoting private investment in a number of airports and landing strips around Peru that are currently managed by the Civil and Commercial Aviation Peruvian Corporation (CORPAC); 9and the Bus Station System project in Lima. This idea came as an initiative from the Municipality of Lima due to the great demand for ground transportation in the city and the ever growing number of terminals in downtown Lima. The objective of this project is to create a bus station system that includes adequate locations and quality of service, provides urban reordering and rescue the historic downtown attractions. The project includes the construction, operation, maintenance and exploitation of terminals. 10

Finally, it should be noted that one of the most important concession projects planned for the near future is the construction of the Inter-Oceanic Highway which will connect Peru and Brazil. This project will increase trade with our neighboring countries allowing the latter, Bolivia and Paraguay to use Peruvian south ports to export and import their products through the Pacific Ocean. The Works and Maintenance Concession scheme of the road stretches included in the project represent a referential investment of approximately US$ 892 million. 11

In order to provide a rich and continuous infrastructure development, the Peruvian Government has established a series of legal dispositions that regulate concessions in the private sector and grant several investment guarantees.

Among the legal measures executed by the Government to encourage private investment in areas of public works of infrastructure and public services we can mention the Value Added Tax Anticipated Recovery Regime and installment payment of Customs Duties, as well as the progressive reduction of Customs Duties rates levying the import of capital goods.

Regarding recent statistics of the Peruvian Institute of Economics (IPE), Peru still has an investment gap in infrastructure (i.e. roads, ports and airports) of US$ 6,090 million12 that should be closed in the next years through private investment in said area.

Considering that the Peruvian Value Added Tax rate is currently 19%, we could assume that the approximate tax burden on the future infrastructure projects could be of 19% of US$6,090 MM, that is, of US$1,157 MM. In order to minimize said negative barrier to investment, a mechanism such as the Value Added Tax Anticipated Recovery Regime has proven to be effective.

In effect, since long-term activities imply that significant Value Added Tax credit will progressively accumulate (i.e. 19% from the acquisition amount) and only in the far away future may be offset against the tax debit (i.e. from the first sale, or beginning of the exploitation) a significant financial adverse effect will take place. Hence, in order to minimize such adverse effect in those cases the possibility of recovering in advance the Value Added Tax credit obtained was introduced.13

The Value Added Tax Anticipated Recovery Regime allows entities receiving the investment to get a refund on all Value Added Tax that levied their imports and/or local acquisitions of new intermediate goods and new capital goods, as well as services and construction contracts.

Consequently, entities entering concession contracts with the State for the development of infrastructure works and public utilities may use the Value Added Tax Anticipated Recovery Regime for imports and local purchase of goods, services and construction contracts required for executing the project contracted for.

In order to obtain the refund, the goods/services acquired must be directly used in activities required to execute the concession agreement. The said entities will be entitled to obtain such refund on a monthly basis.

2. A Value Added Tax and Excise Tax harmonized regime has been recently approved.

3. As part of the negotiations to the Free Trade Agreement between Peru and the USA, the former has guaranteed to the US Government that cases involving US investors will be dealt within a fair and transparent manner.

5. Only 2 concluded cases out of 89 filed with the ICSID involved the Peruvian Government: www.worldbank.org/icsid/cases/cases.htm

9. Information gathered from the PROINVERSION website:www.proinversion.gob.pe

13. Peruvian Value Added Tax is 19% whereas the average of the region is only 14.5% (Source:INDE Consultores).