Netherlands: The Energy Industry And Covid-19: Chesapeake Energy As A Case Study

The oil and gas industry is currently undergoing an unprecedented price collapse that many have cited as seemingly impossible to rebound from. There has been a shock to supply as well as an aberrant drop in demand. The industry was already suffering due to falling natural-gas and crude oil prices and then collapsed even further following the Coronavirus pandemic. Excess supply, specifically from Russia and Saudi Arabia, gauged a price war which led to the price per barrel to drop to under $40. In March of 2020, the severity of the pandemic became obvious and there was a sudden halt in air travel. This, accompanied with widespread lock down measures, led to the United States citing its lowest energy consumption in 30 years in the spring of 2020.

To navigate the unfortunate industry circumstances numerous energy companies have been prompted to slash shareholder distributions, rack up increasing levels of debt, and sell or write-down the value of their assets. This steered many companies towards filing for bankruptcy. As of May 31, 2020, there were approximately 225 bankruptcy cases in the energy sector pending in federal bankruptcy courts. There was a total of 12 in 2017, 18 in 2018, and 18 in 2019. So far, in 2020, 19 energy companies filed for bankruptcies.

Chesapeake Energy: The Rise and Fall

Chesapeake Energy was a pioneer in the energy industry due to its early adoption of fracking extraction mechanisms. In the early 2010s, Chesapeake Energy was the second largest natural gas producer in the United States. However, as time went by Chesapeake Energy began making headlines for several disreputable occurrences. Chesapeake's share price has dropped more than 93% from trading over $180 in January 2020 to under $5 in July 2020.

Since 2014, the Company's stock has steadily plummeted albeit experiencing a few spikes. At its peak, post the 2008 Financial Crisis, Chesapeake stock traded for above $7000 per share. The stock is currently trading at around $4 per share.

The Company's stock crashed so low in March that on April 13, 2020 it announced a suspension of dividend payments on preferred stock, and a 1 for 200 reverse stock-split to comply with exchange listing requirements. Taking the reverse stock split into consideration indicates that the above mentioned $4 share price is close to $0.02 per share.

Experts had warned that bankruptcy was inevitable, however optimistic investors continued trading and holding the stock. The company is roughly 8 billion USD in debt. This is a steep increase, considering that when it declared bankruptcy in June it was 7 billion USD in debt. For the first quarter of 2020 Chesapeake Energy declared an $8.3 billion net loss.

Chesapeake Proceeds to Make Pay Cuts in the Face of COVID

In May, the Company announced that it would be cutting bonuses for senior executives while creating new quarterly bonus incentive programs for non-executive and non-managerial employees. Additionally, it announced decreases in the target variable compensation of the four highest paid named executive officers (target variable compensation was cut by 34% to Chief Executive Officer Doug Lawler and Chief Financial Officer Domenic J. Dell'Osso; by 33% to Frank J. Patterson, its executive vice president for exploration and production; and by 28% for James R. Webb, its general counsel).

The Company also reduced non-employee director compensation by around 15% on an aggregate basis and announced that all non-employee director compensation would be paid in cash on a quarterly basis. Furthermore, in terms of payment to senior executives and named executive officers, the company released a statement affirming that target variable compensation received by those employees would be prepaid with an obligation to refund up to 100% of the compensation on an after-tax basis (50%  based on their continued employment for a period of up to 12 months and 50% based on achieving certain specified incentive metrics).

Internal Influences: The Necessity of Diversity

While many of Chesapeake's issues can be attributed to external factors, one must not overlook or undervalue how ill-advised decisions made by the Company's executive leadership may have aggravated existing difficulties. 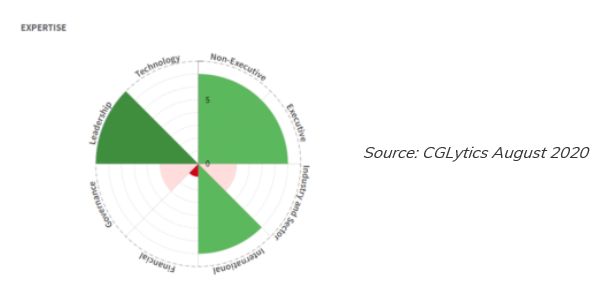 The Company's Board of Directors is lacking in several areas of expertise that are crucial to the success of a Company. In an eight-person Board, only two members possess Industry and Sector expertise, while only one member has Financial expertise.

Chesapeake's leadership was not equipped to navigate the financial pressures troubling the oil industry. The acceleration of Chesapeake's demise was largely due to the accumulation of excessive amounts of debt. In addition, the Company was not diverse in its investments and allocated much of its funding towards horizontal drilling and hydraulic fracturing.

Recent studies have proven that diversity leads to more profitability. Gender, cultural, and generational representation in a Company's executive leadership are necessary for innovation in both growth and problem solving. Chesapeake's board of directors has no cultural representation and little diversity with regards to gender and age.

Chesapeake announced that filing for Chapter 11 bankruptcy protection will enable the Company to obtain a more sustainable capital structure and a healthier balance sheet. Chesapeake has secured $925 million in DIP financing and has reached agreements with the majority of its creditors to eliminate approximately $7 billion in debt. The company also secured a $600 million commitment of new equity. The Company will continue with business as usual throughout the restructuring process. Doug Lawler, President and Chief Executive officer of the Company proclaimed that "Chesapeake will be uniquely positioned to emerge from the Chapter 11 process as a stronger and more competitive enterprise.

The Impact of COVID-19 on Executive Pay

Download our latest report to learn how Russell 3000 companies have adjusted their executive pay due to COVID-19 to ensure your company's pay practices are aligned to market standards.