Poland: Volume And Value Of Electricity To Be Auctioned In 2016

On 13 April 2015 the first drafts of two regulations which define the maximum volume and value of electricity generated in renewable energy source ("RES") to be auctioned in year 2016 were published.

The drafts have been forwarded for inter-departmental and public consultations. Both regulations are executive acts to the Renewable Energy Sources Act of 20 February 2015. The first regulation settles the overall volume and value of electric energy to be sold in 2016, whereas the second regulation defines which part of this volume should be allocated to auction for RES installations which have up to 1 MW of installed capacity.

The below volumes will be delivered during the timespan of the support system (i.e. in the period of 15 years). 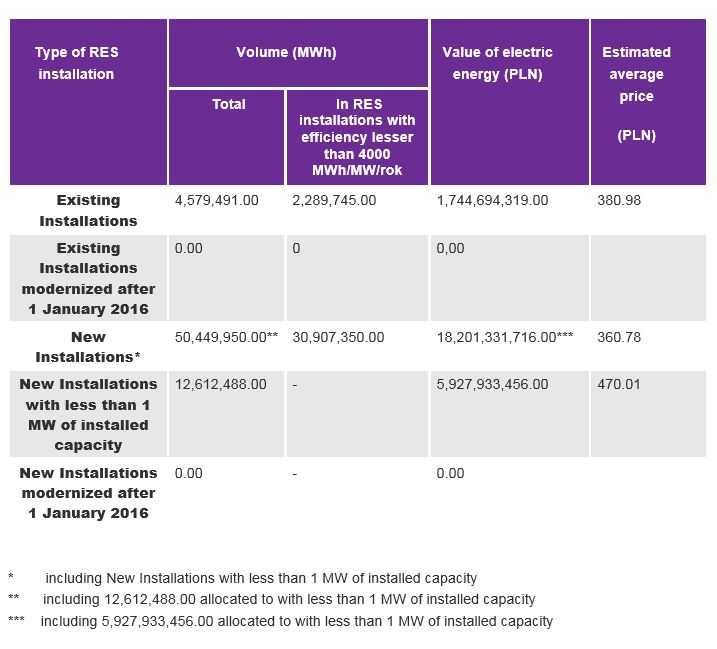 ARTICLE TAGS
Poland Energy and Natural Resources Oil, Gas & Electricity
POPULAR ARTICLES ON: Energy and Natural Resources from Poland
The Importance Of Conducting A Legal Audit (Due Diligence) When Acquiring A RES Facility In Kazakhstan
Unicase Law Firm
Acquisitions typically require the buyer to exercise a substantial amount of prior due diligence. Before committing to a transaction, the buyer will want to obtain an understanding of, amongst other things:
M&A In Kazakhstan Subsoil Use And Renewable Energy Sectors: Regulatory Approach
Unicase Law Firm
Branch is a structural subdivision of a foreign legal entity that performs all or part of the foreign entity's functions.
Renewable Energy Development In Kazakhstan
Unicase Law Firm
Overview on the strategic targets, large projects and further development of the legislation in the renewable energy sector.
An Overview Of YEK-G Certificate And Organized YEK-G Market
Ozduran Law Firm
The European Green Deal presented on December 11, 2019. The European Green Deal is a strategic road map aiming to regulate the commitments of the European Union regarding the struggle against...
The Financial Settlement Centre Gets A Boost In State Support
Unicase Law Firm
Over the past decade, Kazakhstan has been developing its legal and regulatory framework in the renewable energy sector.
New Renewable Energy Support Mechanism Announced
Esin Attorney Partnership
As reported in our Legal Alert dated 4 December 2020, the industry awaited the President of Turkey's decision regarding the renewable energy support mechanism ("YEKDEM") for renewable energy based...
FREE News Alerts
Sign Up for our free News Alerts - All the latest articles on your chosen topics condensed into a free bi-weekly email.
Register For News Alerts
Article Tags
Poland Energy and Natural Resources Oil, Gas & Electricity
Related Articles
Budgets Of The 2020 RES Auctions Dentons
Summary Of Renewable Energy Sources Auctions Conducted In 2019 Dentons
Budget Of The RES Auctions In 2020 Dentons
The Amendment To The Polish Act On Renewable Energy Sources (RES) Dentons
Amendments To The RES Act Dentons
Mondaq Webinars
Visas, Work Visas/ Residence Permits and Nigeria's New Visa Policy
Famsville Solicitors
Webinar Lagos Nigeria
Competition Law Compliance Programs and Trainings: Client Experiences and Notes for the Future
ELIG Gürkaynak Attorneys-at-Law
Webinar Istanbul Turkey
More Webinars
Comparative Guides
International Arbitration
Labour and Employment
Trademarks
Virtual Currencies
Mondaq Advice Centres
Global
Trademarks in SAARC Countries
Global
Investment Immigration
More MACs
Upcoming Events
Mondaq Social Media