Nigeria: Fighting Counterfeiting In Nigeria: Where We Stand On This Issue

Counterfeit products are everywhere nowadays, filing the markets with twin scourges,  often very similar, or even fairly identical to the originals, with almost certainly lower quality but much cheaper, which makes them very understandably more attractive for consumers that have no means to purchase the real deal – the first generation goods.

Some months ago whilst on one of the workshops on Anti-Counterfeiting I frequently attend, the panellist told the audience something that got caught in my mind: if you want to know if a specific product, from a specific brand is trending at the moment, just take a look at its presence and demand in illegal markets.

In 2017, a report from Frontier Economics  - based on a previous report of 2016 by OECD -prepared for BASCAP and INTA and later disclosed by the International Chamber of Commerce (ICC) estimated that in 2022 the total international trade in counterfeit and pirated goods will be as high as 991 Billion, almost doubling the number reported in 2013 of 461 Billion. 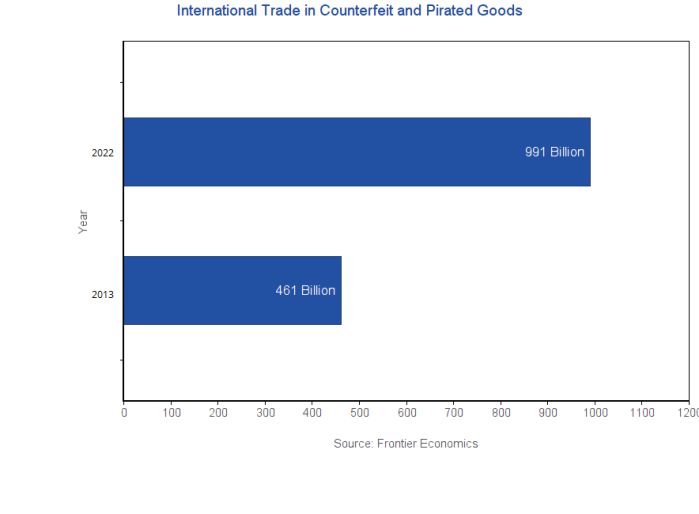 The astonishing numbers affect economic activity, taxes revenue, investment and employment worldwide. The report projected that counterfeiting activity will put at risk between 4.2 and 5.4 million legitimate jobs. Nigeria, unfortunately but not surprisingly, is indicated as one of the countries at jeopardy, comprehensible since its market has become a huge target for second generation goods, with a major focus on pharmaceutical drugs.

Of course it is well known that Intellectual Property protection plays a very important role in the fight against counterfeiting and in helping to diminish its negative impact on the economy of a specific jurisdiction.

Fighting Counterfeiting in Nigeria – a Work in Progress

The Global Competitiveness Report of 2017-2018 of the World Economic Forum ranked Nigeria in 125. º Place in a pool of 137 economies that had its national competitiveness measured.

Late last year Nnenna Ugo Awa, Assistant superintendent for the Nigeria Customs Service wrote a very interesting article for the WIPO magazine, in which addresses the ranking and appoints the high influx of counterfeited products into the market as one probable cause for the low rank, stating even that "[s]uch indicators suggest that Nigeria is not a fertile destination for FDI".

Nigeria has an estimated population of 200 million inhabitants. The West African country has abundant natural riches, such as crude oil, cocoa and rubber, which are resources that are exported worldwide, which adds to the country's economic possibility for achievement. Today, the combination of these two factors make Nigeria the country with the largest economy in Africa. Nevertheless, a critical number of over 180 million people still live in extreme poverty.

Levels of Counterfeiting in Nigeria are extremely high especially, but not refrained to, pharmaceutical drugs. In 2020 the World Health Association reported that 70% of all drugs present in Nigeria were second generation goods.

This framework raises concerns not only for the economic activity in general, but also because there is often lack of awareness on the consumer's part for the potential lethality of these products.

In this sense, measures at Customs have been playing a very crucial role in the fight against Counterfeiting.

Although there is no specific legal framework for the enforcing of measures against counterfeiting that covers every economic sector in the country however, there are several Acts and regulations that address the issue directly.

Nigeria Customs Service has a mandate to:

Furthermore, Nigeria Customs have been closely collaborating with some regulatory border agencies that have been involved in the fight such as National Agency for Foods and Drugs Administration (NAFDAC), the Nigeria Copyright Commission (NCC) and the Standards Organisation of Nigeria (SON). The collaboration has been fruitful, reports from 2017, according to Awa, show that more than 3 million counterfeit pharmaceuticals in infringement of intellectual property rights were intercepted.

In what regards fighting counterfeiting, Nigeria still has a long way to go.  Nevertheless, the efforts made towards the right path have been duly noted and it is with expectation and hope that we observe anti-counterfeiting Associations, Customs, trademark owners and policymakers coming together to take a stand against second generation goods, making a valuable change to the economy of the country.

This article was originally published in The Trademark Lawyer Magazine