New Zealand: Recent New Zealand Non-use Decisions Reinforce The "Use It Or Lose It" Principle

Three recent decisions of the Assistant Commissioner of Trade Marks in New Zealand demonstrate the power of trade mark revocation (aka "non-use") actions in New Zealand, if the registered trade mark has not been used in relation to all of its registered goods or services. This continues on from a number of recent cases which I discussed throughout 2019 and 2020 and highlight the strategic advantages which exist in seeking revocation of a New Zealand trade mark registration.1

Are brochures "use" of a trade mark?

In Nitro AG v Nitro Circus IP Holdings LP [2020] NZIPOTM232, Nitro AG sought to defend use of its NITRO mark in classes 25 and 28 against a revocation/non-use action by Nitro Circus IP Holding LP (Circus). In this case, Circus was smart enough to adopt a series of cascading dates upon which the relevant NITRO marks should be removed, including a date that predated Circus' own application for its own application for its NITRO CIRCUS trade mark. This strategy avoided the concept of "zombie" marks recently considered by New Zealand's highest court.3

This case demonstrates clearly just how clinical and precise the Assistant Commissioner will be when considering evidence in a New Zealand revocation action. That said, the Assistant Commissioner stated expressly that she was conscious of "an overly molecular approach of considering each item of evidence individually: the evidence must be considered as a whole"4, as well as carefully considering the key case of MELTAL MAN5, in which a single advertisement was sufficient to defeat a non-use action.

The Assistant commissioner also considered that "it is not fatal to the owner's case that there is no evidence confirming that NITRO branded clothing was in fact exhibited or sold at the NZSIF trade fares. it is sufficient that the NITRO mark was used as a badge of origin for clothing in catalogues, involving at least one third party, which were clearly aimed at the real commercial exploitation of the trade mark in the New Zealand snow sports market within the relevant time frame"6

A similar analysis followed in class 28. Much of the evidence which the brand owner relied upon could not be considered as it was either undated, post-dated or unclear. This demonstrates the hard line which New Zealand takes in relation to evidence, unlike its cousins in Australia.

This NITRO case is once again a good demonstration that in New Zealand revocation actions, it is quality not quantity that counts in relation to evidence.

What about "special circumstances" - the Cidirol case?

Interag used the CIDIROL trade mark on a fertility enhancer product for animals which had an oestrogen active ingredient. However, in 2007 New Zealand introduced a ban on oestrogen products for animals which produced food for human consumption. Consequently, Bayer applied for removal of the CIDIROL registration. Interag alleged that the ban created "special circumstances", as Interag literally could not legally sell its specific CIDIROL branded products in New Zealand.

How "special" are "special circumstances" in New Zealand revocation actions?

Its turns out, very special. The term "special circumstances" is not defined in the New Zealand Trade Marks Act, and previous cases considered that the term should be given its ordinary meaning. In this case, the Assistant Commissioner considered that special circumstances "must justify departing from the strong public interest in preventing unused trade marks clogging up the Register and creating no go zones"9

The Assistant Commissioner also dismissed Article 19 of the TRIPs Agreement which allegedly cited import restrictions or other Government requirements as examples which may justify non-use.

Is a Government ban on the branded products "special"?

There is no dispute that the Ban was both out of the ordinary and a one-off product specific event10. Nonetheless, the Assistant Commissioner did not consider it "special" as the ban only prevented the trade mark being used on a specific class 5 product, not all of the goods covered by the registration - i.e. Interag was free to use the mark on other goods. Furthermore, Interag's argument that use of the same or similar mark on other class 5 products would cause confusion was dismissed, largely due to weaknesses in the evidence itself and as the target market (veterinarians) are both highly trained and likely to be aware of the ban on the CIDIROL branded product. The Assistant Commissioner held that "Interag gave up on the CIDIROL trade mark when the ban came into force" and Interag's assertion of a confusion risk was considered to have been raised a "a convenient basis on which to mount a defence to a competitors application for removal of an unused mark"11. So, Interag lost its CIDIROL registration

The case stands as a strong warning that just because a brand owner cannot not sell its specific branded product in New Zealand, this does not necessarily create "special circumstances" sufficient to defeat a revocation action.

In the Office of the Retirement Commissioner v Cash Converters Pty Ltd [2020] NZIPOTM 27 (23 December 2020)"12. The Assistant Commissioner restricted the Office of the Retirement Commissioner's (ORC) registration of trade mark SORTED to the very specific services for which the mark has been used, in response to Cash Converters' revocation action. This decision demonstrates clearly why New Zealand revocation actions can be a helpful addition to any brand owner's global toolkit, especially if it needs to "raise the ante" in negotiation of an international trade mark dispute.

After the parties quibbled as to  whether or not Cash Converters was a "person aggrieved" (another trap for Australian attorneys who only dabble in New Zealand) the Assistant Commissioner provided an excellent and very helpful summary of how the coverage of NZ trade mark registrations have been narrowed  in assessing numerous revocation actions and which he considered "instructive", namely: 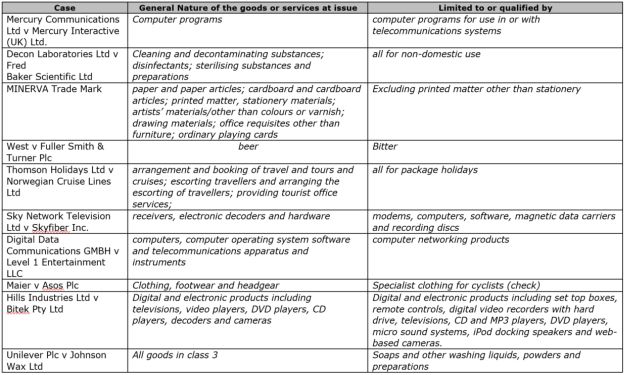 The Assistant Commissioner then commences upon a very careful and clinical analysis once again, to identify a fair description of the services that are provided under the sorted trade mark, namely [13]:To this table we can add the recent case I discussed last year in which Unilever could not even retain coverage for "dried, frozen and canned peas" when it had only used the mark for "dried peas", with IPONZ insisting that the registration is restricted accordingly just to "dried peas" 14

Many service providers will also register their brand for "advisory and consultancy services". The Assistant Commissioner did not consider that retention of either term that was fair or appropriate in this case an ordered that they be removed, along with umbrella terms such as "financial services".   In so doing, the Assistant Commissioner provides a warning to other service providers who have registered their marks in New Zealand, about possible "pruning" which may occur if their own trad mark registration is the target for a revocation action.

Where did these cases take us?  Throwing New Zealand revocation actions into your toolkit

Independently each of these cases may seem somewhat unremarkable. However along with  other New Zealand revocation cases I have discussed over the last couple of years, these cases reinforce why New Zealand non-use revocation actions should be included in any brand owner or IP lawyers "toolkit", particularly if dealing with the dispute either in Australia or internationally. When we compare these actions to their Australian equivalent, there are some key take away points:

ARTICLE TAGS
New Zealand Intellectual Property Trademark
POPULAR ARTICLES ON: Intellectual Property from New Zealand
Patent Law in India
Anand & Anand
The Patents Act 1970, along with the Patents Rules 1972, came into force on 20th April 1972, replacing the Indian Patents and Designs Act 1911. The Patents Act was largely based on the recommendations of the Ayyangar Committee Report headed by Justice N. Rajagopala Ayyangar. One of the recommendations was the allowance of only process patents with regard to inventions relating to drugs, medicines, food and chemicals.
Compulsory Licensing In India
Khurana and Khurana
WIPO defines patent as an exclusive right granted for an invention, which is a product or a process that provides, in general, a new way of doing something, or offers a new technical solution to a problem
Patents Law In India - Everything You Must Know
Vaish Associates Advocates
The presentPatents Act, 1970 came into force in the year 1972, amending and consolidating the existing law relating to Patents in India
What Can Be Patented In India?
Intepat IP Services Pvt Ltd
Sections 3 and 4 of the Indian Patents Act, 1970 specifically state exclusions to what can be patented in India.
Concept Of Fair Use And Fair Dealing In Copyright
Singh & Associates
Fair use supports "socially laudable purposes," typically, if not exclusively, involving the use of the copyrighted work by a second author
All You Need To Know About "Well-Known Trademarks"
Khurana and Khurana
With coming up of the new Trade Mark Rules 2017, a new procedure has been created that allows the Registrar to proclaim a particular trademark as "well known".
FREE News Alerts
Sign Up for our free News Alerts - All the latest articles on your chosen topics condensed into a free bi-weekly email.
Register For News Alerts
Article Tags
New Zealand Intellectual Property Trademark
Related Articles
DCC New Zealand Trade Mark Kete – November 2020 – April 2021 Davies Collison Cave
Nothing But Strong Evidence Of Confusion Will Suffice In A New Zealand Spillover Reputation Case Davies Collison Cave
Copyright protection in New Zealand LegalVision
New Zealand's Highest Court Find That "zombies" Do Exist In New Zealand After All Davies Collison Cave
DCC New Zealand Trade Mark Kete Davies Collison Cave
Mondaq Webinars
Notice and Claims Administration Best Practices: U.S foundations, Global Implications
Angeion Group
Webinar Philadelphia, PA United States
Coming to the UK - Pre & Post-Entry Planning
Druces LLP
Webinar London UK
More Webinars
Mondaq Advice Centres
Global
Trademarks in SAARC Countries
Global
Investment Immigration
More MACs
Upcoming Events
Mondaq Social Media