New Zealand: Ultra Fast Broadband: If You Build It They Will Come…

by Jason Woolley and Mark Williamson
DLA Piper Australia
To print this article, all you need is to be registered or login on Mondaq.com.

Or, more accurately, if you build part of it they will come to Oamaru. That is how the government hopes the private sector and local authorities will respond to its draft broadband investment initiative released last week for comment.1

The proposal is to set up a Crown Fibre Investment Company (CFIC) to invest $1.5 billion in up to 25 local fibre companies (LFCs) that will deploy and provide access to fibre optic network infrastructure to the 75% of New Zealand's population located in our 25 largest cities and towns. Oamaru is 25th on the list.

This fibre-to-the-home (FTTH) initiative is intended to achieve broadband speeds of up to 100 megabits per second (Mbps), over the next 10 years. This compares to the 10-20 Mbps that will be achieved for 80% of the population under Telecom's current fibre-to-the-node rollout which is scheduled for completion by 2011.

Of the $1.5 billion, $150 million is already earmarked to be spent on making schools 'broadband ready'. This leaves $1.35 billion for a broader FTTH network. The government is looking to the private sector to provide the remainder of what the paper estimates will be a total cost of $3 to $6 billion to roll out a FTTH network to 75% of the population. In return, the private sector partner will secure shares in the LFCs and the government's acknowledgement that its own shareholdings in the LFCs may be 'concessionary' and in particular subject to a lower rate of return than the shareholdings of its LFC partners, at least for the initial period (which the paper defines as 'for example up to 10 years'). Partners are expected to offer both investment and the commercial and technical ability to deploy and operate the fibre network.

The proposed structure is: 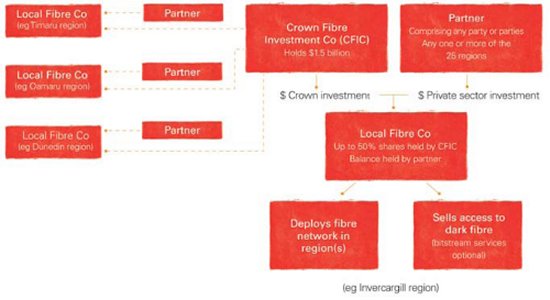 The proposal paper expressly states that there is to be no 'regulatory holiday' for the LFCs. In other words there is to be no undertaking from the government that, in return for investment, the LFCs will not be made subject to regulation under the Telecommunications Act 2001 or the Commerce Act 1986. This means that, while pricing will initially be determined commercially, there is scope under either of those Acts for the Commerce Commission to make recommendations to the relevant Minister that prices be regulated.

However, the proposal also recommends that existing telcos with retail operations be ineligible to participate as partners in LFCs unless they either:

The intention of this is that any incentive for an LFC to engage in anti competitive behaviour by favouring its own retail operation would be eliminated.

What exactly this means for Telecom is not clear. On the one hand it has just undergone a hugely expensive and difficult operational separation whereby its retail, wholesale and fixed network divisions have been separated and structured in such a way as to ensure they behave as separate entities. On the other hand, those divisions are still part of the same legal entity and Telecom's retail division would not appear to meet the paper's test of being 'fully divested'. This has prompted media speculation that Telecom's network arm, Chorus, will be structurally separated from the rest of Telecom, leaving it free to control any LFCs in which it invests.

One of the key selection criteria that the CFIC is to apply when selecting proposals is achieving a roughly proportionate spread of the available government funds across regions. This means in relation to the 25 cities and towns referred to in the proposal an approximate distribution of the available funds would be as follows: 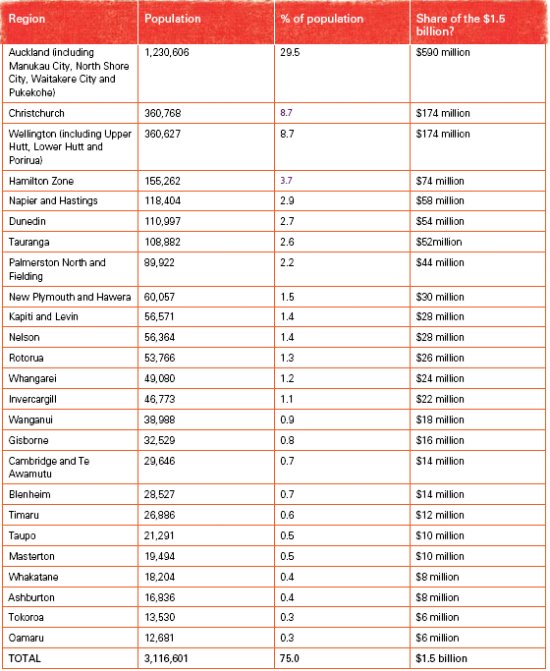 As noted above, of the $1.5 billion, $150 million is already earmarked for making schools broadband ready so that to secure the full level of funding indicated in the table, proposals will presumably have to assist the CFIC in meeting that objective.

Some points of interest are:

What Will FTTH Deliver?

In terms of economic benefits from FTTH, the paper refers to independent estimates of improved productivity, global connectivity and capacity for innovation valued at between $2.4 billion and $4.4 billion a year. In answer to the critics who say that the benefits of a step change in broadband capacity are speculative, and that even the experts still can't say exactly what many homes and businesses could usefully do with up to 100 Mbps of extra bandwidth, the paper's response is in part 'if you build it they will come'. The paper notes that in the short term there could be significant productivity improvements for ICT dependent businesses but that for most residential users the applications available with FTTH as compared to the status quo are unlikely to be significantly different. However, the paper puts its faith in new applications being developed in the future and references the massive growth in applications over the last 10 to 15 years on the back of incremental increases in available bandwidth. The paper notes:

'...in 10 years' time it is likely we'll be talking about ultra fast broadband at speeds of 100 Mbps and there are very likely to be applications that will demand this bandwidth.'

Submissions on the proposal close at 5pm on 27 April 2009. The timetable after that proposes a report back to cabinet by the end of May, the appointment of the CFIC by mid June 2009 and thereafter indicative dates whereby an RFP would be released by the CFIC by mid August 2009, proposals due by mid October 2009, and the initial decisions made by the CFIC by January 2010.

1. The proposal is available at www.med.govt.nz/upload/63958/Final-broadband-iniative-consultation-document.pdf

Phillips Fox has changed its name to DLA Phillips Fox because the firm entered into an exclusive alliance with DLA Piper, one of the largest legal services organisations in the world. We will retain our offices in every major commercial centre in Australia and New Zealand, with no operational change to your relationship with the firm. DLA Phillips Fox can now take your business one step further − by connecting you to a global network of legal experience, talent and knowledge.

This publication is intended as a first point of reference and should not be relied on as a substitute for professional advice. Specialist legal advice should always be sought in relation to any particular circumstances and no liability will be accepted for any losses incurred by those relying solely on this publication.

ARTICLE TAGS
New Zealand Media, Telecoms, IT, Entertainment IT and Internet Telecoms, Mobile & Cable Communications
POPULAR ARTICLES ON: Media, Telecoms, IT, Entertainment from New Zealand
Cyber Crimes Under The IPC And IT Act - An Uneasy Co-Existence
Argus Partners
The term "cyber-crimes" is not defined in any statute or rulebook. The word "cyber" is slang for anything relating to computers, information technology, internet and virtual reality.
Internet Of Things (IoT) – Policy And Challenges In India
HSA Advocates
By: Gaurav Sahay, Partner & Shreya Pola,
Advertising Law In India - Part 1
Global Jurix, Advocates & Solicitors
At present in India, there is no central statutory agency or uniform legislation regulating the advertising industry.
Intermediary Liability: Evolution Of Safe-Harbour Law In India (Part I)
Ikigai Law
This is a quick guide to the evolution of safe harbour provisions under Indian Law and how proposed amendments are likely to impact them.
Cyberlaw In India: The Information Technology Act 2000 - Some Perspectives
Cyberlaws
Since the beginning of civilization, man has always been motivated by the need to make progress and better the existing technologies. This has led to tremendous development and progress which has been a launching pad for further developments. Of all the significant advances made by mankind from the beginning till date, probably the most important of them is the development of Internet.
Extraordinary TRAI Responds To DoT On Key OSP Issues In Record Time
Khaitan & Co
The legal and regulatory framework relating to other service provider (OSP) has a direct impact on India's outsourcing industry.
FREE News Alerts
Sign Up for our free News Alerts - All the latest articles on your chosen topics condensed into a free bi-weekly email.
Register For News Alerts
Article Tags
New Zealand Media, Telecoms, IT, Entertainment IT and Internet Telecoms, Mobile & Cable Communications
Related Articles
Use of Influencers in Advertising – important new changes for advertisers and influencers released by the Advertising Standards Authority Wynn Williams Lawyers
Social Responsibility In Advertising – COVID-19 Update Global Advertising Lawyers Alliance (GALA)
COVID-19 - What are the expectations, if I am sharing the care of my child/children during Level 4? Cavell Leitch
Dealing with misconduct: The NRL no-fault stand down policy Cavell Leitch
Media law in New Zealand – insights for 2019 Chapman Tripp
Mondaq Webinars
Patent Filing, Prosecution, and Enforcement in India
LexOrbis
Webinar New Delhi India
Trade, Competition and Foreign Subsidies: What New EU Rules Might Mean in the Wake of Brexit
Van Bael & Bellis
Webinar Brussels Belgium
More Webinars
Mondaq Advice Centres
Global
Investment Immigration
Global
Trademarks in SAARC Countries
More MACs
Curated Content
A Different Perspective To Employer`s Liability For Anti-Competitive Behaviors: Arçelik's Application For Leniency
ELIG Gürkaynak Attorneys-at-Law
Losing The Battle, Winning The War? – Ramifications Of The Newly Introduced Settlement Mechanism Under Turkish Competition Law
ELIG Gürkaynak Attorneys-at-Law
Upcoming Events
Mondaq Social Media