New Zealand: Competition Law In 2006 - The Year In Review

by Mark Williamson
DLA Piper Australia
To print this article, all you need is to be registered or login on Mondaq.com.

Throw together a record cartel fine, a cease and desist order, a successful challenge to a merger, conclude with a supermarket clearance application and you have some of the elements of a busy year in the competition law arena. In this bulletin, as we did for 2005, we review some of the highs and lows of New Zealand competition law during 2006.

The regulatory space saw Vector v Commerce Commission, Parker v Hemmingway and the Government v Telecom - these issues will be discussed in a future bulletin.

The year began relatively slowly with only one application for merger clearance, being the ill-fated New Zealand Bus Limited’s application to acquire up to 100% of Wellington based Mana Coach Services Limited. The application was subsequently withdrawn and the parties unsuccessfully attempted to proceed without a clearance.

In February, Sky Network Television Limited were cleared to acquire the broadcasting business of Prime Television New Zealand Limited. The Commission were happy that the acquisition would not delay the introduction of digital television or give Sky/Prime enough clout to buy all the good sports/movies.

Rugby was the winner, at least in part, at the beginning of March with the Commission giving draft authorisation of its player arrangements for the NZRU’s provincial rugby competitions.

A computer parts and systems wholesaler was ordered to pay $50,000 plus costs for resale price maintenance after admitting telephoning resellers to induce them to not sell below specified prices.

New Zealand Bus withdrew its clearance application to acquire Mana Coach Services and boldly announced that it was planning to proceed with the acquisition without clearance. The Commission said it was investigating.

Proceedings were issued against New Zealand Bus. The Commission alleged that the acquisition of the shares in Mana Coach Services would have, or be likely to have, the effect of substantially lessening competition in the market for rights to operate subsidised regular bus and school bus services in the Greater Wellington region.

In April, in what Commission Chair, Paula Rebstock described as a ‘tremendous result’, the defendant companies in the Koppers Arch case were fined a record $3.6 million for cartel conduct. The penalties imposed were more than double the previous highest penalties imposed on a party for cartel behaviour in New Zealand. The case gave further support for the Commission’s views that cartels are alive and well in New Zealand and its decision to put in place a robust leniency policy.

April concluded with the Commission, correctly in our view, announcing that it would not open an investigation into the acquisition of TradeMe Limited by Fairfax New Zealand Holdings Limited.

March/April saw two applications for merger clearance being filed with the Commission.

May began with the Commission announcing that it had opened an investigation under section 47 of the Commerce Act into the global acquisition by Pernod Ricard SA of Allied Domecq. Pernod Ricard had not been able to sell the sparkling wine brands it had promised it would sell as part of its clearance application.

Baycorp Advantage received a warning for a potential breach of section 36 of the Commerce Act (abuse of market power) after it imposed a fee payable by independent debt collectors in 2001. The fees were subsequently withdrawn and no action was taken by the Commission.

Somewhat out of left field, Minister of Commerce, Lianne Dalziel announced that the Ministry of Economic Development would review parts 4 and 5 of the Commerce Act. Parts 4 and 5 relate to the control of goods and services and authorisations and clearances for mergers and acquisitions respectively. Part 4A (Electricity Supply) was initially excluded from the scope of the review, but was subsequently included when the terms of reference for the review were announced in September.

June saw the Commerce Commission give final authorisation to the NZRU’s arrangements for its national competition including the salary cap. The Commission sensibly concluded that, by encouraging an even spread of good rugby players, the salary cap could increase the quality of play, and hence the popularity of rugby and the income to be earned from it.

At the end of June, the High Court delivered its verdict in the New Zealand Bus Case, finding New Zealand Bus guilty of breaching the Commerce Act in respect of its acquisition of Mana Coach shares. While New Zealand Bus and Mana Coach were not currently competing vigorously the court found competition could increase if an alternative owner purchased Mana. This competition would have the potential to bring down prices and reduce the subsidy paid by ratepayers. Significantly, the seller of the shares in Mana Coach, as well as the buyer, was found to have breached section 47.

June drew to a close with the Commission ending its investigation into Pernod Ricard’s acquisition of Allied Domecq and deciding that there was no substantial lessening of competition.

May/June saw only one application for merger clearance being filed with the Commission.

Wesfarmers Industrial and Safety New Zealand Limited received a warning from the Commission after three of their employees allegedly sent emails to various suppliers of Wesfarmers discouraging them from supplying Amare Safety as it tried to enter the New Zealand market.

It was announced that the Commission and the Australian Competition and Consumer Commission had agreed, in principle, to a protocol to enhance their cooperation in dealing with the review of trans-Tasman mergers.

August also saw the first ever cease and desist order against Northport Limited. This arose from allegations that Northport had granted an exclusive licence to its own joint venture ports service company, Northport Services Limited, and was restricting the entry of other companies to marshall cargo at the Marsden Point port.

August concluded with wood preservative company Osmose New Zealand and its former General Manager being fined for obstructing a Commerce Commission investigation. The criminal convictions were the latest development in Commission proceedings against the wood preservative chemicals industry.

The Ministry of Economic Development (MED) released the terms of reference for the review of part 4 and 5 of the Commerce Act 1986 and broadened the scope of the review to include the electricity supply provisions of part 4A. The review is in fact two reviews, ie a review of the regulatory control provisions and a review of the authorisation and clearance provisions, with different time frames for each review. MED is currently drafting the discussion papers which should be released for consultation within the next few months.

The resale price maintenance provisions of the Commerce Act once again allegedly tripped up a supplier who received a warning from the Commission after it allegedly directed Dick Smith Electronics by email not to advertise an iPod accessory below a certain price.

At the end of September, the Commission executed a search warrant at the Auckland offices of Air New Zealand. No further details of the Commission’s investigation were made available.

October began relatively well for the Commission with the High Court imposing a penalty of $500,000 on NZ Bus for its acquisition of the shares in Mana Coach Services. On the downside, the Court noted that Commission staff volunteered the suggestion to withdraw and provided a reason for doing so. Justice Miller found that this suggestion led NZ Bus to review its position and withdraw its clearance and that this consideration mitigated the culpability of NZ Bus considerably. However, the performance of our Commission still compares favourably with that of officials at Ireland’s Competition Authority who were reported as looking sheepish, after an administrative error meant that the authority unintentionally cleared Topaz Energy Group’s merger with Statoil. Although the vendors of the Mana Coach shares were found to have breached section 47, they were not required to pay a penalty because they did not gain from the transaction, knew nothing of the Commission’s concerns and reasonably relied on the advice of the purchaser that no clearance was required.

October also saw Osmose New Zealand, Osmose Australia and two Australian based executives fined a total of $1.8 million for participating in the wood preservatives cartel. The fine of $100,000 for one executive was the highest penalty ever imposed on an individual cartel member.

September/October saw four applications for clearance filed with the Commission.

The final two months of the year began with the Commission issuing proceedings against Visa, Mastercard and 11 banks and other financial institutions for alleged price-fixing in relation to credit card interchange fees. Interestingly, and relatively uncommonly for New Zealand, seven New Zealand retailers have also launched legal action against a number of credit card institutions, seeking damages for breaches of the Commerce Act.

The year ended with the filing of an application for clearance by the Foodstuffs Co-operatives (advised by DLA Phillips Fox) for up to 100% of the shares in The Warehouse Group Limited. A similar application was filed by Woolworths Australia in the new year.

2007 will be a year of major litigation. The New Zealand Bus decision, both the substantive and penalty decision, is being appealed. Expect to see a useful discussion around defining the counterfactual (the hypothetical scenario if the acquisition is not permitted to proceed) and the meaning of ‘likely’ under section 47. The Commission’s case against the credit card companies and financial institutions discussed above will also be high profile and create some useful further precedent around the meaning of arrangement or understanding under section 27 of the Commerce Act.

It is also a safe bet to assume that further cartel litigation will be commenced by the Commission in 2007.

The supermarket clearance decisions should provide guidance on the Commission’s attitude to the potential for coordinated behaviour in markets with few players and the threat posed by a possible competitor.

The greater cooperation between the ACCC and the Commerce Commission will continue, particularly in the enforcement area. In the area of mergers, the ACCC may be busy bedding down its role under Australia’s new merger regime, which came into force January of this year.

Finally, what can we expect out the review of parts 4 and 5 of the Commerce Act? Ideally, appeals of clearance/authorisation applications will become de-novo, ie the merger is considered afresh by the Court, and a review tribunal - made of up a High Court judge and perhaps two industry experts - will be established to consider merits review of regulatory decisions by the Commission. However, it may be that the usual arguments of resource constraints and costs win the day.

Phillips Fox has changed its name to DLA Phillips Fox because the firm entered into an exclusive alliance with DLA Piper, one of the largest legal services organisations in the world. We will retain our offices in every major commercial centre in Australia and New Zealand, with no operational change to your relationship with the firm. DLA Phillips Fox can now take your business one step further − by connecting you to a global network of legal experience, talent and knowledge. 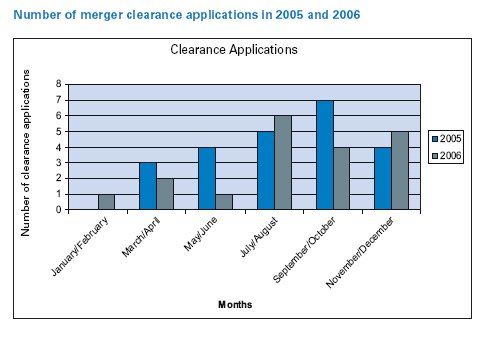 This publication is intended as a first point of reference and should not be relied on as a substitute for professional advice. Specialist legal advice should always be sought in relation to any particular circumstances and no liability will be accepted for any losses incurred by those relying solely on this publication.