by Rhona Henry , Kimberley Masuda and Nicola Dunleavy
Matheson
Your LinkedIn Connections
with the authors

In this edition, we outline the key drivers impacting the contraction of the professional indemnity insurance market in Ireland over the last few years. We also take a closer look at recent adjudication cases focussed on the right to counterclaim and the binding nature of an adjudicator's decision. Finally, we explore the function of The Office of the Planning Regulator (the "OPR") and its work so far.

Professional Indemnity Insurance: the drivers behind contraction of the market

The professional indemnity insurance market in Ireland has considerably contracted over the last few years. Now more than ever, the construction world is feeling the effects of this and made worse by the burden facing the sector due to the COVID-19 pandemic. The difficulty in obtaining or renewing professional indemnity insurance is an uphill struggle faced not only by employers and parties with design responsibility, but also third party project stakeholders such as funders and landlords.

The drivers behind the contraction of this particular insurance market include: 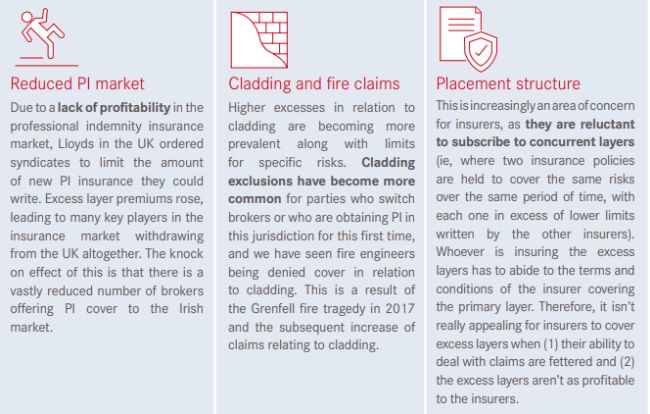 Key takeaway: Employers, contractors and designers now need to carry out a full audit of the contractual commitments provided by them (eg, professional indemnity insurance obligations and indemnity provisions) (particularly those with any design responsibility). We frequently hear from designers / contractors that they are now facing difficulties in securing renewal of their policies originally underwritten on an "each and every claim" basis. Cover underwritten "on an aggregate basis" being offered instead has led to parties no longer being able to comply with their contractual obligations. Employers, contractors and designers need to assess where insurance gaps now exist and work through possible alternatives in each case.

Adjudication and the High Court: the right to counterclaim and the binding nature of an adjudicator's decision

The Court determined that:

BCL argued that the words in section 6(11) of the Construction Contracts Act 2013 (CCA) "if binding" meant the adjudicator's decision is not binding and therefore should not be enforced. The Court followed the earlier Gravity Construction case and confirmed that the purpose of the CCA was to provide a "summary procedure to enforce the payment of moneys from one party to another in a building contract" and confirmed that section 6(10) provides that the adjudicator's decision "shall be binding" until the payment dispute is finally settled or a different decision is made at arbitration or in Court. On that basis, the words "if binding" should be narrowly construed and the decision is therefore enforceable.

BCL had claimed PCL were liable to pay liquidated and ascertained damages to BCL under the contract. The adjudicator determined that he did not have jurisdiction to hear this counterclaim as this was, at law, a separate claim. The adjudicator cited the UK case Bresco Electrical Services Ltd v Michael J Londale (Electrical) Ltd3 when he confirmed that while he could consider a full defence including abatement and set-off he could not consider a claim for a monetary award in favour of the respondent. The Court agreed (but without specifically citing the UK case) and also found that the adjudicator did in fact deal with the issue of delay and determined that PCL was not responsible for the delay.

This case reinforces the binding nature of an adjudicator's decision and demonstrates the judicial support for the CCA as well as the Court's reluctance to interfere with the adjudication process. It is telling that, in its judgment, the High Court expressly emphasised the purpose and aim of the CCA to "provide for a summary procedure to enforce the payment of moneys from one party to another in a building contract, notwithstanding that it may ultimately transpire that such moneys are, in fact, not owed. This ensures that moneys are paid without having to await the outcome of arbitration or litigation, which, more often than not, involves delay". This demonstrates that the adjudication process in the CCA is intended as an alternative to court proceedings. Examples such as the High Court allowing an adjudicator to take its power from the CCA regardless of the contractual provisions, and confirming the right to adjudicate at any time, are evidence of the Court's firm efforts to facilitate and strengthen the adjudication process.

This judicial support is further evidenced in another recent High Court decision concerning an adjudication relating to works carried out at Páirc Uí Chaoimh.4 In that case, Cork GAA argued that the adjudicator had no jurisdiction on the dispute because the construction contract governing the works was a letter of intent entered into before the CCA was commenced. The High Court initially stayed the adjudication process and confirmed that adjudicators' decisions may be subject to judicial review proceedings. However, in its judgment in the substantive proceedings, confirmed that the adjudicator did have jurisdiction to determine the dispute by finding that the parties entered into a construction contract in 2017 which was in fact governing the works. This case again demonstrates the Court's openness to facilitating the adjudication process.

Office of the Planning Regulator: function and work so far

In July 2021, the OPR commented on the development plan proposed by Cork County Council and made ten recommendations, three of which relate to residential growth and the proposed level of land to be rezoned for residential use. The OPR found that the housing targets as projected in the proposed development plan significantly exceeded the projected population growth for the region in the National Planning Framework Implementation Roadmap ("NPFIR"). The OPR has recommended that the local authority revise the population and housing allocations "to avoid disproportionate levels of new housing development in relatively small settlements with inadequate capacity to provide the necessary services and infrastructure, including public transport accessibility". The OPR has recommended that the planning authority review the quantity of land zoned for residential use to ensure consistency with housing supply targets. According to the OPR, the overestimation of required housing risks diverting resources into infrastructure which is beyond reasonable need.

That submission followed a similar approach to the OPR submission in respect of the proposed development plan by Dun Laoghaire Rathdown County Co in April 2021. In that submission, the OPR also found that the planning authority had significantly exceeded the NPFIR targets. The OPR criticised the proposed extent of land use zoned for residential development based on the excessive housing targets. In reconsidering land zoning, the OPR also recommended that the planning authority "prioritise the sequential development of more favourably located lands, in terms of access to quality public transport . . . in order to better achieve meaningful compact growth".