Ireland: The Regulation Of Lobbying Act 2015

by Bríd Munnelly , Carina Lawlor and Michael Byrne
Matheson
Your LinkedIn Connections
with the authors

From 1 September 2015, lobbying is now regulated in Ireland under the Regulation of Lobbying Act 2015 (the "Act"). The Act will have major implications for those lobbying public officials, including international companies lobbying an Irish public official within the jurisdiction.

The Act introduces a publicly accessible register for those carrying on lobbying activities - not just professional lobbyists – as well as providing for a one-year cooling-off period before former politicians and senior public servants can engage in lobbying following their retirement. The Act also permits the Standards in Public Office Commission ("SIPO") to introduce a statutory code of conduct for lobbyists.

Under the Act, registrable communications are those made to "designated public officials", which include Irish Government Ministers, members of parliament, special advisers, and other senior public servants and office holders who were prescribed by statutory instrument on 1 September 2015. The Minister for Public Expenditure and Reform can prescribe additional public servants and we expect him to do so in the coming months.

As well as professional lobbyists who make relevant communications on behalf of those persons at (a) to (c) below in return for payment, the following persons will also be considered lobbyists, when lobbying on their own behalf, for the purposes of the Act:

With effect from 1 September 2015, all lobbyists must register with SIPO and submit particulars of their lobbying three times a year. The Act contains sanctions for non-compliance.

It is recommended that all organisations affected by the Act introduce and develop compliance policies to ensure relevant communications are registered. Additionally, all returns should be thoroughly reviewed and advice sought where necessary, as the information, once published, is freely available to the public. 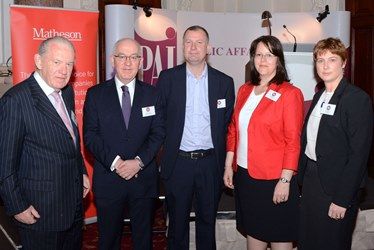 ARTICLE TAGS
Ireland Government, Public Sector Constitutional & Administrative Law
POPULAR ARTICLES ON: Government, Public Sector from Ireland
Foreign Direct Investments In Austria And Germany: A Comparative Overview
OBLIN Attorneys at Law LLP
In light of the volatility of financial markets accelerated by the COVID-19 pandemic, and rising concerns over the heightened risk of buyouts of key national assets and industries, the issue of foreign direct investment screening ...
Foreign Direct Investment Exemptions To Foreign Currency Ban - Is It An Advantage Or A Handicap?
Yazicioglu Attorney At Law
As the value of Turkish Lira was going down, on 12 September 2018, the President of Turkey issued a decision (Decision) (published on 13 September), which prohibits residents in Turkey to agree on their payment obligations ...
Business & Human Rights Series: 01 Why Are Human Rights Relevant To Business?
CETINKAYA
This is the first in a series of articles on business and human rights with a specific focus on businesses domiciled and operating in Turkey. The collection of articles in this series will make up the first-ever practical guide to business and human rights in Turkey.
Brexit Action Plan
Gilson Gray
The critical starting point in establishing an organisation's exposure to labour disruption and skills shortages is to carry out an audit of the workforce as the precursor to undertaking...
The Regulation Of Crowdfunding In Ireland – An Update
Philip Lee
The regulation of crowdfunding in Ireland, and indeed a unified approach across Europe has been long awaited.
UK Government Publishes Far-reaching National Security And Investment Bill
Mayer Brown
On 11 November 2020 the UK government published a far-reaching Bill which envisages the most significant changes to the treatment of mergers and acquisitions in the United Kingdom in several decades.
FREE News Alerts
Sign Up for our free News Alerts - All the latest articles on your chosen topics condensed into a free bi-weekly email.
Register For News Alerts
Article Tags
Ireland Government, Public Sector Constitutional & Administrative Law
Similar Articles
Powered by mondaq AI
MATCH
69%
The Lobbying Register: Facilitating Transparency Matheson
Related Articles
EBA Opinion Signals A Shift To Greater Consistency On Assessment Of AML And CFT In Banking Ronan Daly Jermyn
The Regulation Of Crowdfunding In Ireland – An Update Philip Lee
EU FDI Framework Regulation (EU) 2019/452 (the "Regulation") Eversheds Sutherland
Brexit Blog: Canada-Style Or Australian Terms – On Or Off At The Brexit Table? Matheson
Brexit – Implications For Contract Disputes From 1 January 2021 Onwards Eversheds Sutherland
Mondaq Webinars
Arbitration is Common and Civil
OBLIN Attorneys at Law LLP
Webinar Wien Austria
Construction Disputes: What Will 2021 Bring?
SCHOUPS Advocaten Avocats Lawyers
Webinar Brussels Belgium
More Webinars
Comparative Guides
Alternative Investment Funds
Anti-Corruption & Bribery
Banking Regulation
Corporate Tax
Enforcement of Foreign Judgments
Mondaq Advice Centres
Global
Trademarks in SAARC Countries
Global
Investment Immigration
Offshore
Asset Management & Investment Funds
More MACs
Curated Content
A Framework For Examination Of Personal Devices Under The Turkish Competition Authority's New Guidelines – How It Converges With And Differs From The EU Practice
ELIG Gürkaynak Attorneys-at-Law
Digital Securities Business Is About To Bloom
Anderson Mori & Tomotsune
A Different Perspective To Employer`s Liability For Anti-Competitive Behaviors: Arçelik's Application For Leniency
ELIG Gürkaynak Attorneys-at-Law
Losing The Battle, Winning The War? – Ramifications Of The Newly Introduced Settlement Mechanism Under Turkish Competition Law
ELIG Gürkaynak Attorneys-at-Law
Upcoming Events
Mondaq Social Media