Vietnam: Made In Vietnam: Draft Regulations On Rules Of Origin

Vietnam's Ministry of Industry and Trade (MOIT) recently released draft regulation – Decree No. 31/2018/ ND-CP – on labeling criteria for domestically consumed goods. The draft and subsequent media reports have caused many in Vietnam's foreign investment community to question how the regulation will impact their business.

The Nikkei Asian Review reported that the draft regulations specify that goods must have a localization ratio of at least 30 percent to be designated as Vietnamese made.

This will primarily impact companies that produce a product in multiple countries for sale in the Vietnamese market. These companies must now source 30 percent of their value of input locally to be recognized as Vietnamese in origin and apply the appropriate Harmonized Commodity (HS) code to qualify.

Which products are affected by the draft regulation?

Dezan Shira & Associates Business Intelligence Manager Maxfield Brown has advised many foreign-invested manufacturers on rules of origin in Vietnam and more recently on the Decree No. 31/2018/ ND-CP draft regulation. Brown summarizes the scope of the regulation as follows: 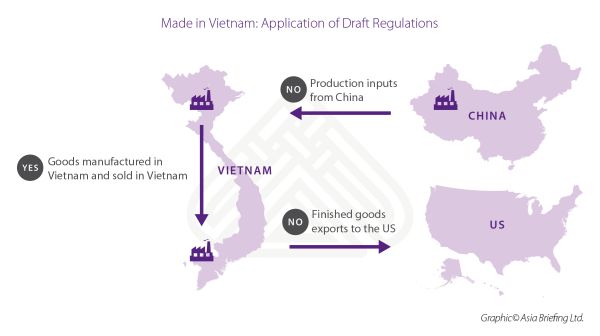 If the regulations comes into effect, the 30 percent input requirement will not be a problem for labor-intensive industries, such as textiles and garments, which are able to source locally.

However, industries that use less labor and source a significant amount of raw material from abroad may have a re-think of their business plans.

It is also important to note that the regulation affects goods produced for the Vietnamese market and not applicable for exports to international markets that are dictated by specific free trade and bilateral agreements.

Why is there a new focus on Made in Vietnam?

The new draft regulations follow a government investigation into Vietnamese electronics manufacturer Asanzo, which was reported to be importing Chinese products and selling them as Asanzo- or Vietnam-made. Reports stated that Asanzo would only assemble electronic products – such as televisions – at its factory using most or all components from China.

However, on closer look, Asanzo may not have done anything wrong.

Current regulations state that the origin of goods is defined as the country where the goods are wholly produced or where substantial processing is done in case there are several countries involved in producing the certain product. Manufacturers can use domestic law or bilateral agreements to determine labeling requirements.

For example, in Asanzo's case, products that do not originate from Vietnam cannot be labeled as Vietnamese made under the ASEAN-China FTA. However, as per World Trade Organization (WTO) regulations effective for both Vietnam and China, Asanzo did nothing wrong, as the last stage of production took place in Vietnam, while inputs were sourced from China.

Vietnam Law Magazine reported that Au Anh Tuan, Head of the Customs Control at the General Department of Customs, said, "we have adopted the rules of origin applicable to exports, but none for goods sold in the domestic market."

The draft regulation is currently open to the public for comment.

Some media reports have speculated that the draft is partly a response to US pressure for scrutiny of Chinese products in Vietnam. However, this new regulation does not take aim at companies that may be seeking to evade US tariffs on China.

Ultimately, the Vietnamese government wants to protect the consumer's interests. The draft regulation will help clarify what products qualify as made in Vietnam.

One way it could do this is by using Apple's example of imprinting the back of its iPhones with "Designed by Apple in California, Assembled in China." This gives the consumer a clearer picture of where the product is coming from.