The CAA has published its annual report and key figures for 2019. The Luxembourg market continued to benefit from Brexit and consolidated its international growth. The regulator has already anticipated the effects of the COVID-19 crisis and confirmed it will focus on solvency ratios, especially with respect to Brexit newcomers.

?On 28 September 2020, the Commissariat Aux Assurances (the CAA) published its annual report and key figures for 2019. The Luxembourg market continued to benefit from Brexit and consolidated its international growth. The regulator has already anticipated the effects of the COVID-19 crisis and confirmed it will focus on solvency ratios, especially with respect to Brexit newcomers (i.e. (re)insurers which migrated from the UK to Luxembourg because of Brexit).

1. Confirmation of the market's strength in 2019

One of the main trends in 2019 is the development of the non-life insurance business. This is illustrated in particular by a significant increase in non-life insurance turnover (+177,65%), the opening of branches from across the European Union (+20), and a large number of new employees (+60%). The primary reason is that Brexit newcomers effectively started underwriting business in 2019. The CAA is therefore of the view that growth in 2020 will be more modest.

With respect to insurance distributors, the CAA also observed a significant increase in new authorised brokers (+20 individuals and +10 firms) due to the Brexit migration of five brokerage firms. The number of new authorised insurance agents (+516 agents and +24 agencies) also indicates that Luxembourg insurers took steps to fully implement IDD. Another interesting figure is that the CAA received many exemption requests for authorisation as an insurance agent or as an insurance sub-broker (+26%) and that it answered positively in most cases (78,92%).

2. Reinforcement of investigations and complaints handling

The CAA notes that the overall solvency ratios decreased, even though they are still excellent (202,09% in 2019; 215,24% in 2018). Many Brexit newcomers up-streamed excess own funds to their holding entities more than in the past. As a consequence, the regulator announced that it will strengthen its focus on solvency capital requirements coverage ratios. The CAA will also extend its supervision scope by becoming an out-of-court complaint resolution entity and highlighted its new CAA regulation 19/03 in that respect. 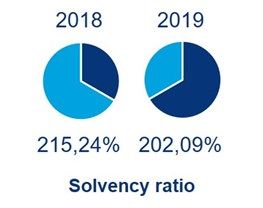 All these announcements from the CAA coincide with its new recruitment plan which will see twenty new agents hired during the next five years. In other words, reporting analysis and controls should not decrease in 2021 despite the COVID-19 pandemic. Only on-site inspections have been put on hold until the end of the crisis and the annual report reveals that fifty were undertaken during the first half of 2019.

In 2018, the main regulatory update for the insurance sector was IDD. In 2019, Luxembourg implemented inter alia two new sets of EU regulations which should attract the attention of (re)insurers and brokers: (i) the Directive on institutions for occupational retirement provision and (ii) the fourth and fifth directives regarding anti-money laundering.

The CAA updated its coordinated version of the Insurance Sector Law in order to reflect these developments. It also reviewed the AML rules of the insurance sector by replacing CAA Regulation 13/01 with new CAA Regulation 20/03.

The CAA commented that the Luxembourg Parliament is discussing a draft bill regarding unclaimed life insurance policies.

Although not mentioned in the 2019 annual report, the CAA recently announced an important governance change. On 1 January 2020, Thierry Flamand will succeed Claude Wirion as the new director of the CAA.

Thierry Flamand has over twenty years of experience in the insurance, reinsurance and pension sector. He previously worked in China as the CFO of an international insurance group, was most recently a partner at Deloitte Luxembourg and PWC Luxembourg, and is currently a member of several technical committees within the CAA.